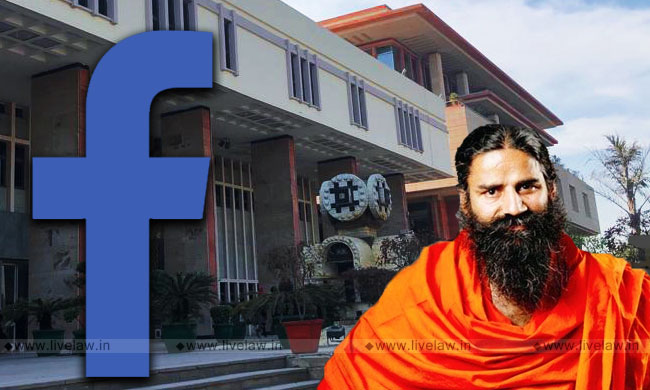 A Division Bench of Delhi High Court comprising Justice Muralidhar and Justice Talwant Singh on Thursday admitted Facebook's appeal against the order passed by a Single Bench imposing global injunction on the social media giant under section 79 of Information Technology Act to block defamatory contents uploaded against Baba Ramdev. The Bench has also clarified that while no interim...

The Bench has also clarified that while no interim stay would be granted, the respondents would not be allowed to move a contempt application before disposal of the appeal.

This means that Facebook will not face any contempt action for the time being even if it does not implement the direction for global blocking of content against Baba Ramdev.

The Single Bench of Justice Pratibha Singh in her interim order had held that so long as either the uploading takes place from India or the information/data is located in India on a computer resource, Indian courts would have the jurisdiction to pass global injunctions.

Facebook in its appeal has contended that despite the plaintiff being aware of the persons who uploaded the content, they were not made parties to the suit. Moreover, the injunction order was passed despite alternate remedies being available at the court's disposal.

'Instead of imposing the global injunction, it could've asked the Petitioner to take a legal action against the uploaders of the contested content', the plea mentions.

Appellants have also claimed that the Single Bench had wrongfully interpreted section 79(3)(b) of the Information Technology Act, as the provision nowhere mentions that has extra-territorial application.

Facebook has contended that Baba Ramdev did not show any strong prima facie case of irreparable loss in order to seek final relief such as global injunction. Therefore, the court erred in granting final relief at an interim stage of the case.

Appellants go on to submit that the court did not show any exigencies to warrant a global injunction. The taking down of the content in India, as per the court's earlier interim order, was adequate to deal with the reputational concerns of Ramdev.

Further, it is submitted, that the practice of global injunctions violate principles of national sovereignty and international comity. The impugned judgment interferes with the laws prevailing in other countries regarding online injunctions.

It is averred in the appeal that if present order is not reversed, it would undermine the immunities granted to the Appellants in other jurisdictions.

The next date of hearing is December 7.