'Not Much Evidence For Involvement In Violence' : Delhi HC Grants Bail To Person Arrested Over Bus Burning During CAA Protests [Read Order] 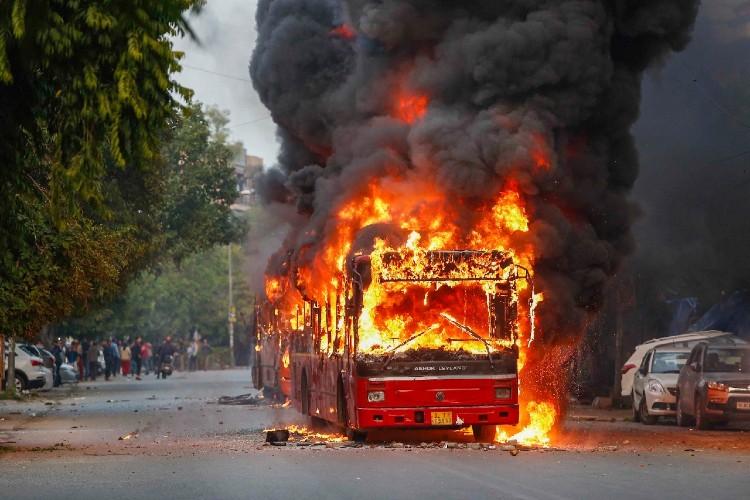 After 49 days of custody, the Delhi High Court on Monday allowed the bail application of Danish Jaffer, one among the seven persons arrested on allegations of violence during near Jamia Milia Islamia University on 15th December, 2019 during protests against the CAA.

The FIR registered by Jamia Nagar Police Station alleged that a crowd protesting against the Citizenship (Amendment) Act, 2019 and the National Population Register (NPR) had turned violent and burnt buses, damaged vehicles and injured police officials by throwing stones and bricks. It invoked offences ranging from rioting to attempt to commit culpable homicide under the Indian Penal Code, 1860, as well as offences under the Prevention of Damage to Public Property Act, 1984.

The bail was opposed by the Addl. Public Prosecutor for the State on the grounds that the Petitioner was one of the protesters who had indulged in the violent acts, including the burning of the Kabristan Police Booth, Jamia Nagar.

It was claimed by the APP that the Petitioner had been nabbed on the 16th of December, from a place near his house. The APP also informed the court that the CCTV footage had been obtained and was being analysed, and the Petitioner was a habitual offender who had been involved in several similar cases.

Printouts from the Twitter handle of Delhi Police were also handed over to the court which displayed photographs of 71 protesters identified from the CCTV footage. However, not one of them was the Petitioner.

In light of the submissions, Justice Vibhu Bakhru, granted bail on the ground that there was insufficient materials evidence to prove the involvement of the Petitioner in the violence that had ensued.

He noted that, "whilst the right to protest and express cannot be interdicted; violence in any form cannot be countenanced. However, in the present case, there does not appear to be much material evidencing the involvement of the petitioner in indulging in any violent act."

Accordingly, the petition was disposed of, with the condition that the Petitioner would furnish Rs. 5000 as personal bond and one surety of an equivalent amount to the satisfaction of the concerned trial court, mark his attendance at PS Jamia Nagar on every Monday of the calendar week, and maintain discipline.