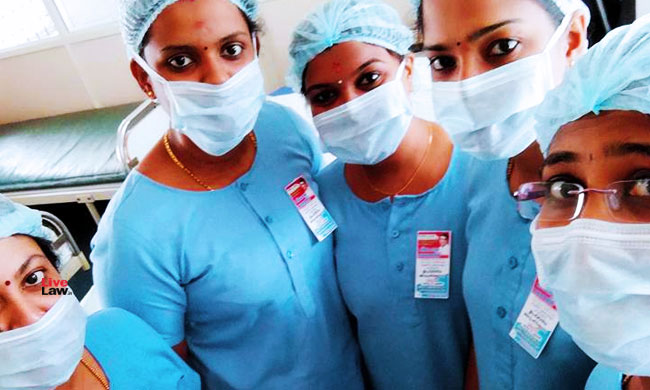 Batting for the rights of health care givers, the Delhi High Court has upheld the order issued by the AAP led-Delhi Government on June 25, 2018 for improving the salry and working conditions of nurses in private hospital.As per the order issued by the Director General of Health Services(DGHS), parity in pay between nurses employed in private hospitals/nursing homes, and nurses employed by...

Batting for the rights of health care givers, the Delhi High Court has upheld the order issued by the AAP led-Delhi Government on June 25, 2018 for improving the salry and working conditions of nurses in private hospital.

As per the order issued by the Director General of Health Services(DGHS), parity in pay between nurses employed in private hospitals/nursing homes, and nurses employed by State Government hospitals, has been directed in cases of hospitals having more than 200 beds.

In case of hospitals with 100 - 200 beds, the salary given to private nurses should not be more than 10% less in comparison of the salary of State Government nurses in the corresponding grade.

The DGHS order was based on the recommendations made by the Expert Committee constituted by the Ministry of Health and Family Welfare on September 20, 2016.  The Expert Committee was constituted following the direction issued by the Supreme Court on Janaury 29,2016 in the case Trained Nurses Association vs Union of India "to do the needful for improvement of working conditions and pay of the nurses working in private hospitals and nursing homes".

The hospitals which failed to comply with the order were threatened with cancellation of their registration as well.

This order was challenged by Association of Health Care Providers (India) Ltd as being arbitrary, illegal and unreasonable. It was the petitioner's contention that the order was issued without following the procedure under the Minimum Wages Act.  The Association also contended that the Supreme Court in Trained Nurses Association case had directed legislative measures, and therefore executive order cannot be issued regarding the nurses' issue.The Association also complained that the hospitals were not heard before issuing the order.

"The Committee, which constitutes extremely high-ranking officials, and also includes representatives of private hospitals, has positively found that the "pay and working condition" of nurses employed in private hospitals/nursing homes "is really pathetic". It is sacrilegious, therefore, to require nurses, who discharge selfless service night after night, to work in conditions which are pathetic. No compromise can, therefore, be made, so far as ensuring optimum working conditions, for nurses, is concerned. The Expert Committee merely equated the salary, to be paid to nurses in private hospitals and nursing homes, with the salary paid to nurses in government hospitals. It cannot be said, by any stretch of imagination, that the recommendation is expropriatory in nature."

Justice Hari Shankar said that the order was not a revision of minimum wages, and that the Expert Committee was acting as per SC directions.

"Inasmuch as it was not functioning under the Minimum Wages Act, the Expert Committee could not be said to have been constrained to act within the parameters contemplated by the said Act. Neither was it obligated to follow the procedure, prescribed in the said Act, for revision of minimum wages. All that was required, of the Expert Committee, was to act fairly.", said the bench.

The grievance of the petitioner that private hospitals were not associated with the deliberations of the Expert Committee was found to be incorrect, as the constitution of the Committee included representation by Fortis, Delhi and Narayana Health, Bangalore.

The Court however expressed that cancellation of registration of hospital for non-compliance of the order should be exercised cautiously.

"Cancellation of the registration of a hospital or a nursing home is an extreme step, fraught with serious and debilitating consequences. It affects, not only the hospital, but also all its employees and the patients who may be admitted, therein. This is a step which is required to be taken with extreme care, caution and circumspection.", said the judgment authored by Justice Hari Shankar.

The hospital should be given adequate opportunity of being heard before any move for cancellation is ordered, the Court added