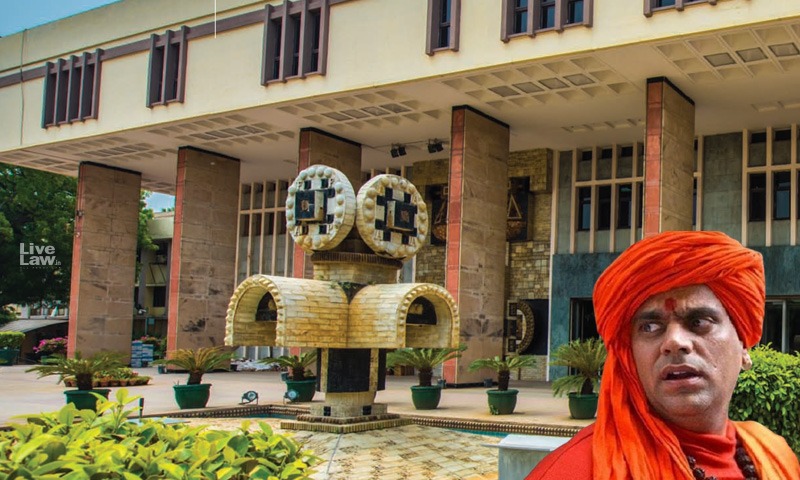 The Delhi High Court has dismissed a petition filed by Swami Chakrapani, claiming to be the President of Akhil Bharat Hindu Mahasabha, and seeking a direction to the Election Commission of India to permit the party's office bearers to contest Assembly elections in several states.Noting that the factum of Chakrapani occupying the said position is highly disputed, a Division Bench of Chief...

The Delhi High Court has dismissed a petition filed by Swami Chakrapani, claiming to be the President of Akhil Bharat Hindu Mahasabha, and seeking a direction to the Election Commission of India to permit the party's office bearers to contest Assembly elections in several states.

Noting that the factum of Chakrapani occupying the said position is highly disputed, a Division Bench of Chief Justice DN Patel and Justice Jyoti Singh said it cannot pass the orders allowing the aforesaid reliefs.

"As many as half a dozen people are claiming to be the President of this organization," the Chief Justice remarked.

He stated that the Election Commission of India does not have the power or jurisdiction to decide this internal dispute of the political party and that persons concerned may seek a declaration regarding their position in the party from a competent civil court. "This factual aspect ought to be decided by competent Civil Court and not by Election Commission of India," the Court said.

It was submitted that Chakrapani was first elected as the national president for the party in 2006. In November 2020 also, he was recognized as the president of the party by the ECI. However, in January 2011, the Commission withdrew the aforesaid recognition on receiving rival claims.

Senior Advocate Vikas Singh, appearing for Swami Chakrapani, argued that mere filing of disputed claims should not be the criteria for withdrawing recognition. He stated that until the disputing candidate does not obtain an interim order in his favour, the Election Commission should not withdraw an already granted recognition.

Singh added that by not accepting the names of office bearers of ABHM, the Election Commission has literally de-registered the party, which is impermissible in terms of the judgment rendered by the Supreme Court in Indian National Congress v. Institute of Social Welfare & Ors. (2002).

"People will keep filing claims in vested interest but that does not mean that my election in National assembly has gone...Only way to stop me is when someone else goes to court of law and gets an order against me," Singh argued.

Advocate Sidhant Kumar for the Election Commission on the other hand argued that there has been a "chain of disputes" with regard to leadership of ABHM and since it is not a recognized political party, the Commission does not have the power to decide its internal disputes. It was further pointed out that in an earlier round of litigation on the similar issue, it was held by a Division Bench of the High Court that the person claiming to be President of the organization must obtain a declaration in that regard from a competent Court.

"It is for the person who is wanting to exercise rights as President/office bearer to seek a declaration to such office and he cannot be allowed to hold office or to exercise powers thereof merely for the reason of the others having not approached the Court of law," the Division Bench had ruled in LPA 522/2011.

This position was confirmed in July 2012 in a review petition before the High Court and an SLP against the same was dismissed by the Supreme Court in May 2013. Thus, Kumar argued the matter has to be decided by the civil court and not by the Election Commission.

The Court also heard Advocate Barun Kumar Sinha and Advocate Divya Upadhyay, appearing for intervenors claiming to be the Presidents of ABHM. They adopted the arguments canvassed by ECI counsel and submitted that in view of their rival claims, no error has been committed by the Single Judge in relegating Chakrapani to approach the Civil Court for a declaration. They further informed the Bench about two civil suits that are pending before Patiala House Court and Tis Hazari Court for a declaration to claim the said office; and two criminal complaints against Chakrapani.

Concurring with the submissions made by the ECI counsel and stating that the Court is bound by judicial hierarchy, the High Court observed, "We see no reason to entertain this LPA."  It added that the alleged criminal complaints, may have a "direct nexus" with the disputed claim.