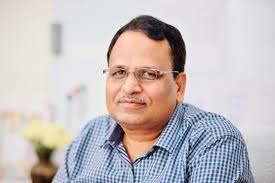 The condition was imposed by the trial Court while remanding Jain to the agency's custody till June 9.

A single bench comprising of Justice Yogesh Khanna said that he will be passing an appropriate order.

The ED had challenged the condition imposed by the Special Judge in the last paragraph of the remand order stating that during the time of interrogation, one Advocate shall be allowed to remain present at a safe distance where from he can see Jain but not hear him.

Additional Solicitor General SV Raju argued before the Court that the impugned condition was contrary to the 1992 Supreme Court judgment in case titled Poolpandi v. Superintendent, Central Excise and several other judgments passed by Courts from time to time.

Raju argued that although Jain is arrested, he is not an accused and therefore, is not entitled to other rights which are available to accused persons.

"He is not an accused. Presence of a lawyer and compulsion have nothing to do with a lawyer at a distance. The whole process is being video recorded. We do video recording in all the cases. However, we will give his statement in a sealed cover wherein he has said that he does not want video recording," Raju argued.

Raju added that since audio video recording of the interrogation was being done, no prejudice was being caused to Jain in any manner.

"Supposing in a hypothetical case, a person is beaten in such a way that there are no marks. It is very much possible these days. The lawyer would say yes and we would say no we have not beaten. In such a case, if the audio video recording is there, this cannot happen. It's a much better safeguard. No dispute would arise in such a case," Raju submitted.

He added "it is possible these days. Lawyer may watch him. They may have sign language. One doesn't know. It is possible."

Furthermore, Raju submitted that there was no allegation that Jain was being threatened or pressurised in the interrogation process and that his medical checkup was also being done twice a day.

On the other hand, Senior Advocate Abhishek Manu Singhvi appearing for Jain called the case as extraordinary while submitting that the prosecution knew that the law was "100 percent against them."

"They know that the stated law is against them," he added.

Singhvi argued that the Poolpandi judgment, being the bedrock of ED's argument, had a simple distinction that in the said case, it was only decided that a lawyer cannot accompany an accused or cannot be sitting with the accused during interrogation.

He argued that the Courts through various other judgments have consistently devised a system of visible or not being audible.

Singhvi refuted the argument of the ED wherein they had submitted that Jain was not an accused.

"They have repeatedly called me an accused. In writing, apart from whatever he says orally, they have called me respondent accused. The pleadings say x, their oral arguments are opposite," he argued.

Singhvi also argued that the remand application, which is the core of the issue, also referred to Jain as an accused.

"This is an abuse of process of law. They are supposed to follow the law. This should he dismissed with cost," Singhvi concluded.

Jain was arrested on May 30 by the agency. The Enforcement Directorate had then sought 14 days custody of Jain from the Trial Court in the matter. Special CBI Judge Geetanjali Goel had then remanded Jain to ED's custody till June 9.

The agency had last month attached properties worth Rs. 4.81 crore belonging to five companies and others in connection with an alleged disproportionate assets case against Jain and others.

"During the period 2015-16, when Satyendar Kumar Jain was a public servant, the above mentioned companies beneficially owned and controlled by him received accommodation entries to the tune of Rs.4.81 crore from shell companies against cash transferred to Kolkata-based entry operators through 'hawala' route."