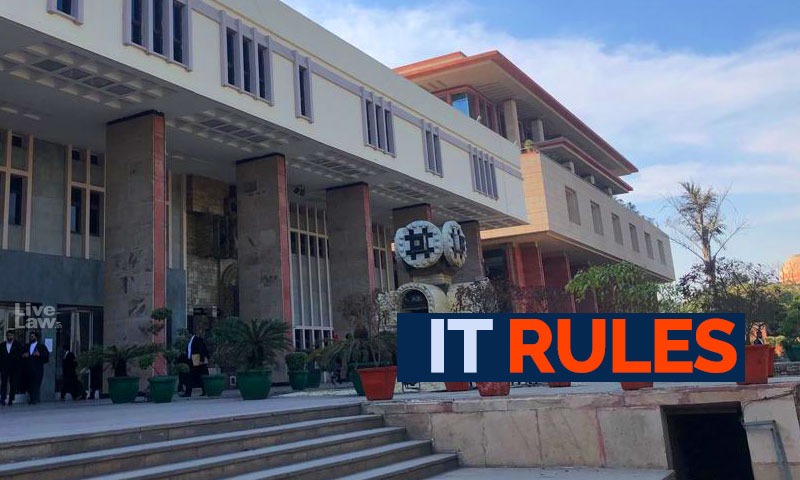 A division bench comprising of Chief Justice DN Patel and Justice Jyoti Singh sought response of Ministry of Electronics and Information Technology. The notice is made returnable on September 13.

Moved by Advocate Uday Bedi, the plea challenges Rule 3 and 4 of the IT Rules for the reason that it provides sweeping powers to the Social Media Intermediaries to voluntarily remove access to information on the basis of complaints received by it from private individuals as it deems fit.

Stating that the aforesaid attempts to overrule the decision of the Supreme Court in Shreya Singhal judgment, the plea avers thus:

"While giving powers in excess of the powers given under the parent legislation, to voluntarily remove access to information that does not conform to Rule 3(1)(b), the Impugned Rules have allowed the SMIs to place the users of these platforms under constant surveillance which is a gross breach of the right to privacy which has been recognised by the Hon'ble Supreme Court of India in K.S. Puttaswamy v. Union of India, (2017) 10 SCC 1."

The plea also states that the impugned Rules are arbitrary and irrational as they do not prescribe for the procedure of appointment of a Grievance Officer or Chief Compliance Officer by such Social Media Intermediaries and Significant SMIswhile giving them the responsibility of disposing of complaints.

"It is most pertinent to note that the procedure for disposing of a complaint made under the Impugned Rules contains no provision for the author of the information to be heard prior to the information being shared by him over the SMI platform effectively, depriving him of his fundamental rights without even being heard. As such, this provision is extremely draconian and amounts to a gross violation of Article 14." The plea reads.

On the aspect of Rule 4(2), the plea states that the same requires the Significant Social Media Intermediary to find out the first originator of a message thereby breaching the right to privacy.

According to the petitioner, such an act is not possible "without decrypting all information that is stored, published, hosted or transmitted through such SSMI".

Calling it a shockingly disproportionate and deeply pervasive encroachment over the right to privacy of social media users, the plea reads:

"Impugned Rules are anti-thetical to the fundamental principles of democracy which is part of the basic structure of the Constitution, where the State agencies are liable to be transparent and the citizens are allowed various rights and freedoms."

- Issue a writ, order or direction in the nature of mandamus, striking down Rule 3 of the Information Technology (Intermediary Guidelines and Digital Media Ethics Code) Rules, 2021, as unconstitutional and ultra vires the IT Act, 2000.

- Issue a writ, order or direction in the nature of mandamus, striking down Rule 4 of the Information Technology (Intermediary Guidelines and Digital Media Ethics Code) Rules, 2021, as unconstitutional and ultra vires the IT Act, 2000.

- Pass any other such order as this Hon'ble Court may deem fit and proper in the premises of this case.