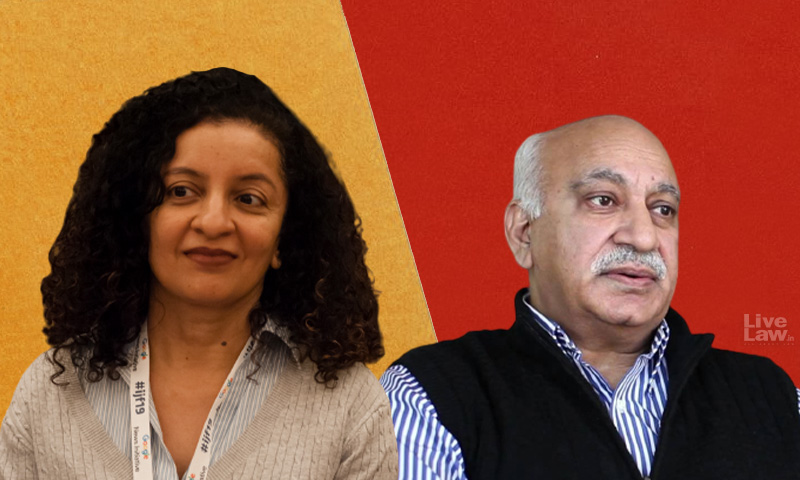 The Delhi High Court today issued notice on an appeal preferred by former Union Minister MJ Akbar, challenging the acquittal of journalist Priya Ramani in the criminal defamation case filed by him over the "metoo" sexual harassment allegations made by her.Justice Mukta Gupta issued notice to the Respondent and fixed the case for hearing on January 13, 2022.The Court heard Senior Advocate's...

The Delhi High Court today issued notice on an appeal preferred by former Union Minister MJ Akbar, challenging the acquittal of journalist Priya Ramani in the criminal defamation case filed by him over the "metoo" sexual harassment allegations made by her.

Justice Mukta Gupta issued notice to the Respondent and fixed the case for hearing on January 13, 2022.

The Court heard Senior Advocate's Geeta Luthra and Rajiv Nayar for the Appellant who stated that the Trial Court had erred in acquitting Ramani, even after coming to a finding that her tweets were defamatory in nature.

"My case was under Section 499 IPC and the Trial Court found that the contents are defamatory. So the minute such a finding is returned, nothing further has to be adjudicated. These observations pertaining to sexual harassment are unnecessary," Nayar argued.

The Court however told Nayar that determining whether the contents are defamatory or not is only the first step in prosecution.

"That's first step. If it is is found not defamatory, there's no need to go further. But if it's found that the contents are defamatory, then 2nd step is to determine whether the defence taken by her was right," the Court opined.

At this juncture, Nayar pointed out that the Trial Court had even rejected her defence. The Trial Court had said, "the defence of the accused regarding publication of only particular portion qua the complainant in document Ex. CW1/9 and remaining portion with respect to the other male bosses is rejected."

In this regard, the appeal states:

"On one hand, while the impugned judgement itself states that the article written by the Accused, which was subsequently linked to the Complainant, was defamatory, and simultaneously rejects the defence of the Accused that only part of the article applied to the Complainant and the remainder did not, it ultimately acquits the Accused. It would follow that the Accused, once her argument is rejected and her publication is held to be defamatory, would be convicted. However, the Ld. Trial Court, even after holding as above, has acquitted the Accused, without providing adequate reasons for such acquittal."

Senior Advocate Geeta Luthra contended that during trial, the Court left the question of admissibility of documents open, for determination at the time of Judgment. However, they were not decided. "Instead, the Court goes on to talk about Ram and Ravan..." she submitted.

A Delhi Court on February 17 acquitted Priya Ramani in the Case.

"Woman has a right to put up the grievance at any platform of her choice even after decades. Woman cannot be punished for raising voice agains sex abuse . Right to reputation cannot be protected at the cost of right to dignity", the trial Court observed while acquitting Priya Ramani in the case.
In his appeal, Akbar has said,
"Trial Court erroneously acquitted the Respondent herein for the offence of defamation, despite holding that the defence qua Ex. CW1/9, the main impugned article, was rejected...Trial Court completely departs from the facts in issue and makes general observations (on sexual harassment)."

Arguments on leave to appeal were conducted by Mr. Akbar's legal team, Senior Advocates Rajiv Nayar and Geeta Luthra, along with a team from Karanjawala & Co., led by Sandeep Kapur, Senior Partner.