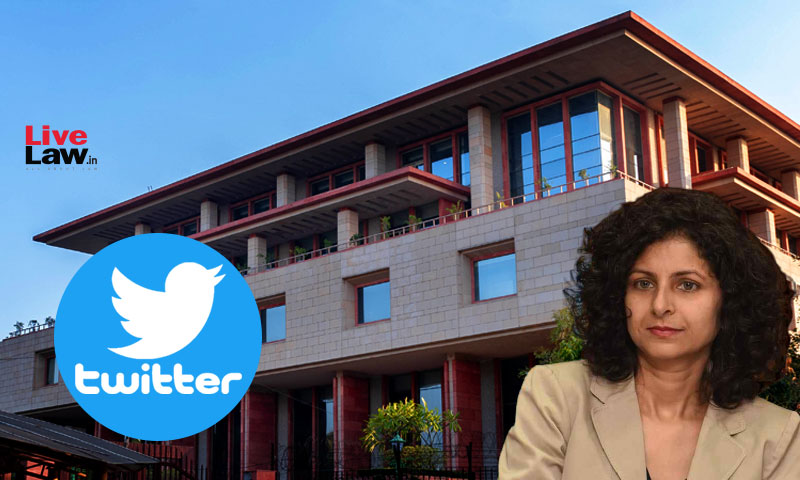 The Delhi High Court on Tuesday issued notice on the petition filed by Aarti Tikoo, journalist and Founder of 'The New Indian', challenging Twitter Inc's decision to lock her account. It is Tikoo's case that she had posted a tweet for calling out the actions of 'Kashmiri Islamists' on Twitter for threatening her cousin.Justice Rekha Palli sought response of the Centre and Twitter Inc...

The Delhi High Court on Tuesday issued notice on the petition filed by Aarti Tikoo, journalist and Founder of 'The New Indian', challenging Twitter Inc's decision to lock her account.

It is Tikoo's case that she had posted a tweet for calling out the actions of 'Kashmiri Islamists' on Twitter for threatening her cousin.

Justice Rekha Palli sought response of the Centre and Twitter Inc while granting three weeks' time for filing counter affidavit in the matter. Further two weeks' time has been granted for filing of the rejoinder.

According to the plea, on December 14, 2021, Tikoo's cousin participated in a Twitter Space discussion wherein he was called an 'Indian Agent' and other allegations were made against him.

The next day, Tikoo posted: "My brother who lives in Srinagar, being openly threatened by jihadi terrorists sitting in Kashmir-India & their handlers in Pakistan, UK & US. Is anyone watching? Are we sitting ducks waiting to be shot dead by Islamists or will you crackdown on them?"

Advocate Raghav Awasthi appearing for Tikoo apprised the Court that the petitioner is a journalist who has been working in the profession for more than 20 years now. He further told the Court that Tikoo's cousin was threatened on Twitter spaces group.

He also told the Court that the present petition was similar to the petition filed by Senior Advocate Sanjay Hegde in the case pertaining to suspension of his Twitter account.

Senior Advocate Arvind Datar who was appearing for Twitter Inc requested the Court to hear the matter along with Sanjay Hegde's petition which is listed for hearing tomorrow.

Hearing the counsels, the Court however made it clear that it was not passing any interim relief at the present stage.

"On interim, Mr. Awasthi, there is no question," Court said.

Awasthi then requested the Court to finally decide the petition on legal points.

"The only thing is, because I'm suspended, I cannot post anything on twitter effectively," Awasthi told the Court while adding that the nature of Tikoo's profession is such that she needs the microblogging site.

Accordingly, while posting the matter on March 30, the Court on the stay application ordered thus:

"Learned counsel for the petitioner does not press the present application at this stage but seeks liberty to file an application if the need so arises after completion of pleadings. Dismissed as not pressed with liberty as prayed for."

Referring to the transcripts of the threats issued to her cousin on Twitter, Tikoo has stated in the petition that Twitter's action of locking her account is violative of Articles 14, 19 and 21 inasmuch as it is an impairment of her right to free speech and is arbitrary.

"Furthermore, there is no provision under which content can be edited or modified before transmission suo-motu by an intermediary like the Respondent No.2. In other words, there is no sanction for this action under the Information Technology Act, 2000 and the latest the Information Technology (Intermediary Guidelines and Digital Media Ethics Code) Rules, 2021 made thereunder," the plea adds.

Accordingly, the plea seeks quashing of Twitter's decision of locking her account apart from deletion of the said tweet.

Obhan & Associates Act On Okinawa Autotech's Joint Venture With Tacita
Latest News
+ More
1Weekly Round-Up of Tax Cases: May 15 To May 21
2A Candidate Has No Legal Right To Insist That The Recruitment Process Set In Motion Be Carried To Its Logical End : Supreme Court
3Women Leaving Law: What Is The Way Ahead?
4While Settling Claims, Insurance Company Should Not Seek Documents Which Are Beyond The Control Of Insured To Furnish: Supreme Court
5Registrar Of The Jharkhand Cooperative Society, Who Also Is The Ex-Officio Director Of The Respondent, Jharkhand High Court Says Appointment As Arbitrator Not Barred As Parties Had Agreed Earlier
6Supreme Court Weekly Round Up: May 16- May 22,2022
7Justice L. Nageswara Rao's Six Years At The Bench - An Extensive Tenure Marked By Notable Interventions
8The Arbitrator Cannot Allow Forfeiture Of A Substantial Amount Of Consideration Without Proof Of Actual Loss Solely On The Ground That It Was Earnest Money: Delhi High Court
लाइव लॉ हिंदी
+ More
International
+ More
1Abortion Laws In The US And Other Countries
2Leaked Draft Judgment Of US Supreme Court Indicates Overruling Of Roe v.Wade Abortion Rights Decision
3The Indian Connection With Pak Decision To Live-Stream Court Proceedings
4Russian Suspension At The Human Rights Council: Band-Aid On A Bullet Wound?
Environment
+ More
1Supreme Court Permits E-Rickshaws In Matheran As Pilot Project To Check Feasibility
2In Case Of Doubt, Protection Of Environment Would've Precedence Over Economic Interest: SC Revokes Approval For Doubling Castlerock to Kulem Railway Line
3NGT Bars Auroville Foundation From Township Construction Till Environmental Clearance Is Obtained
4Ghazipur Landfill Fire: NGT Says Dump Sites In Cities Are Like 'Time Bombs', Constitutes Joint Committee Headed By Former Delhi High Court Judge