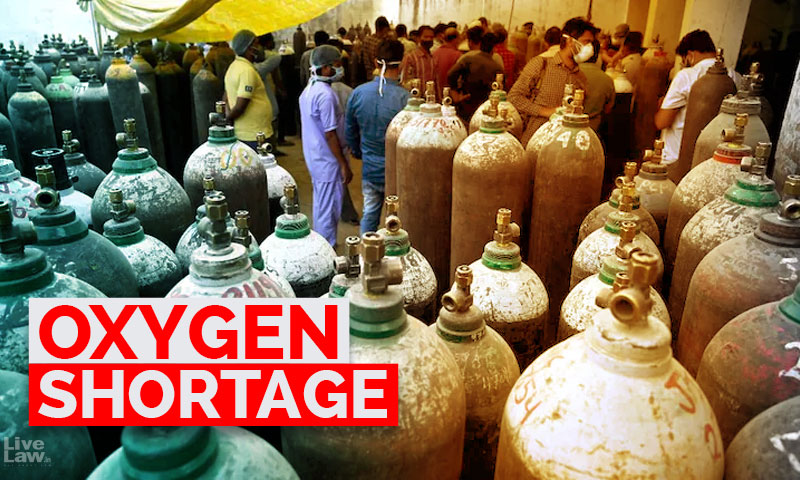 After an advocate broke down in court during the course of a hearing on oxygen shortage in Delhi in the fight against the Covid-19 pandemic, the court expressed its empathy, stating that, "State has failed in its fundamental obligation in protecting basic fundamental right i.e. right to life contained under Article 21." The bench of Justices Vipin Sanghi and Rekha Palli of the Delhi...

After an advocate broke down in court during the course of a hearing on oxygen shortage in Delhi in the fight against the Covid-19 pandemic, the court expressed its empathy, stating that, "State has failed in its fundamental obligation in protecting basic fundamental right i.e. right to life contained under Article 21."

The bench of Justices Vipin Sanghi and Rekha Palli of the Delhi High Court, was informed of the passing away of the brother-in-law of Adv. Amit Sharma, seeking help for whom he had approached the court earlier.

The court was hearing a bunch of cases on oxygen shortage in the capital's fight against Covid-19. The court passed a series of orders in the different matters.

Yesterday, the court had held that though efforts are to be on for seizing oxygen cylinders, Covid-19 medicines, etc from hoarders and black-marketers, the seizures made have to be forwarded to the Deputy Commissioner of Police for due release and/or distribution.

The Court observed while ordering release that, "Activities of black marketing and hoarding shouldn't happen. We can't make money on others desperation at this time. We must show empathy and concern and bring out our best. Hoarding of medicines, oxygen will lead to an artificial scarcity."

After hearing at length various suppliers and re-fillers who shared their problems with respect to lack of oxygen to supply to hospitals, and hospitals that shared the lack of supply, the court suggested that one way out was for the different suppliers, re-fillers and hospitals to form one WhatsApp group to ensure better communication and coordination with one another.

Suspension of 'take over' order against re-filler M/s. Seth Air

The Delhi government also submitted through its counsel, Sr. Adv. Rahul Mehra, that the re-filler M/s. Seth Air, "fortunately or unfortunately, seemed to have a magic wand and ensured (oxygen) supply whenever approached," however, it had left its operations on the Delhi government following a previous order by the Delhi High Court directing take-over of the company's operations.

Pointing out that this had resulted in major obstructions to the free-flow of oxygen supply across the city, Mehra beseeched the Court to suspend its order, stating that its officials could not handle ground-level activities, the same had to be carried out by Seth Air officials only. Upon this, the Court suspended the order noting that it is doing so as it was obstructing supply.

Seth Air had earlier in the hearing submitted before the court that due to non-payment of its dues by the Delhi government, and hospitals, it had no working capital left, major outstanding dues, and would either need urgent payments or interest-free loans to continue supply.

The counsel for Seth Air, also pointed out that coupled with non-payment, it was also faced with higher costs which it was unable to bear. After a lengthy discussion, it was agreed that it would receive supply at the lower rate, however, the counsel then submitted that he still couldn't supply as there was zilch working capital left.

The court-appointed amicus curiae in the case, Sr. Adv. Rajshekhar Rao, then submitted that, "The National Pricing Authority has capped the price of medical oxygen at about Rs.15 at the manufacturer-end, and about Rs. 25 at the re-filler's end," and that "the delta amount is coming due to transportation costs."

Seth submitted upon this that "it can't absorb the delta amount as its bills aren't being cleared by hospitals."

Both Rao and the court then pressed that despite this, "the tankers should not be held up."

The court further suggested that, "The pricing authority should do the exercise," and said that, "Ultimately the price will have to be transferred to the hospitals and then the patients."

Adv. Tyagi for Seth Air submitted that as early as yesterday, it was contacted by the Indian Army to supply 400 cylinders for affected jawans, whom it could not refuse, and this had adversely impacted Delhi's supply. He also indicated that the company was under pressure from various governments, including the Haryana, Delhi and Uttar Pradesh state governments for giving supply, and said, "The situation on ground is very harsh."

The court also asked the supplier, Air Lindae if it was possible to absorb the costs, and asked the counsel for Delhi government, Adv. Satyakam to check both the price and quantity aspects. While the government assured the court that it would, the supplier flatly refused, stating that, "The third-party tankers cost is already incurred. They can pay later but cost can't be reduced further."