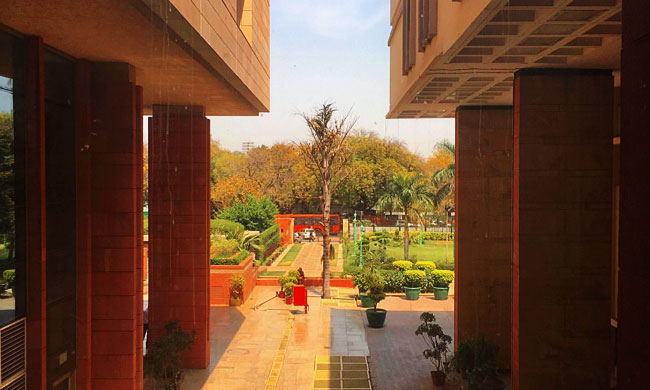 Delhi High Court has allowed Hindustan Times Media Limited's plea seeking interim injunction against a company from using domain name 'hindustan.com' and from fighting a trademark infringement suit in a New York court. While noting that the present court has jurisdiction to hear this matter as per section 134(2) of the Trademarks Act, the Single Bench of Justice Jyoti Singh...

While noting that the present court has jurisdiction to hear this matter as per section 134(2) of the Trademarks Act, the Single Bench of Justice Jyoti Singh noted that the suit instituted in New York is prima facie vexatious and oppressive to the Plaintiffs as they have not asserted trademark rights in the USA.

The present suit was filed by Hindustan Times Media Limited seeking a permanent injunction against the Defendants from using the domain name or any mark deceptively similar or identical to its registered trademark 'Hindustan' and 'Hindustan Times'.

The Plaintiff also asked for a direction restraining the Respondents from proceeding with the suit titled Brainlink International, Inc. v. HT Media Ltd. & Anr. (Civil Action No.1 20-cv-01279) before the United States District Court for the Eastern District of New York or from instituting or filing any other suit/applications/proceedings in any Court of Law in relation to the disputed domain name or any issue which forms the subject matter of the present Suit.

It was further argued by the Plaintiff that the Defendants, admittedly, have no use for the Domain name other than to profit from squatting on the same. Defendants acquired the impugned Domain name in 1996 in bad faith to ride upon the goodwill and reputation of the Plaintiffs' publications.

'Use by the Defendants, without any authorisation/license/consent from the Plaintiffs amounts to Trademark infringement under Section 29 of the Act and passive holding of the Domain name amounts to Passing Off and unfair competition of the Plaintiffs' Trademarks', the Plaintiff argued.

Plaintiff further submitted that this is a fit case for the court to restrain the proceedings of a Foreign Court, by an anti-suit injunction. Defendants, it was argued, are amenable to the personal jurisdiction of this court as the website of the Defendants can be accessed by viewers within

Delhi. Further, the Defendants are willing to sell the Domain name to the Plaintiffs, who are within the jurisdiction of this Court.

'if the injunction is declined, irreparable harm and loss would be caused to the Plaintiffs. Plaintiffs will be constrained to defend themselves before the EDNY Court, which has no jurisdiction over the Plaintiffs or the subject matter of the dispute', the Plaintiff submitted.

Therefore, in the present matter, the court had to examine that whether the Defendants are amenable to personal jurisdiction of this Court, whether injustice would be caused to the Plaintiffs if the injunction was refused and which would be the Forum Conveniens, in case there were more than one Forum available to the Plaintiffs.

While observing that the Defendants have not used to domain 'hindustan.com' since 2000, the court noted that the Defendants' only motive behind registering such a domain name was to profit from it, which is a classic case of cybersquatting, as per the judgment of the Supreme Court in Arun Jaitley v. Network Solutions Private Limited.

The bad faith of the Defendants, the court observed, is also reflected by the faith that they charged an exorbitant amount of 3 million dollars against an offer of 1 million dollars made by the Plaintiff to buy the domain.

While holding that this court has jurisdiction over the present matter, the court noted that the notice and the ensuing email correspondence between the parties wherein the Plaintiff had shown interest in buying the domain took place in Delhi and precedes the suit in New York and is hence merely a counter-blast to the Plaintiffs‟ legitimate exercise of their rights and availment of remedies. Thus, a substantial and integral part of the cause of action under Section 20 (c) CPC for the Plaintiffs to file the present suit, has arisen within the jurisdiction of this Court.

The court also granted interim injunction in favour of the Plaintiff while relying upon following facts:

On this specific ground, the court also temporarily injuncted the Defendants from proceeding further with the suit titled Brainlink International, Inc. v. HT

Media Ltd. and Another before the United States District Court for the Eastern District of New York or to institute/file any suit, applications, proceedings in any Court of Law or Authority, in relation to the impugned Domain name or in relation to any issue which forms the subject matter of the present suit.

The Defendants are further restrained from creating third party rights in the domain name 'hindustan.com'.