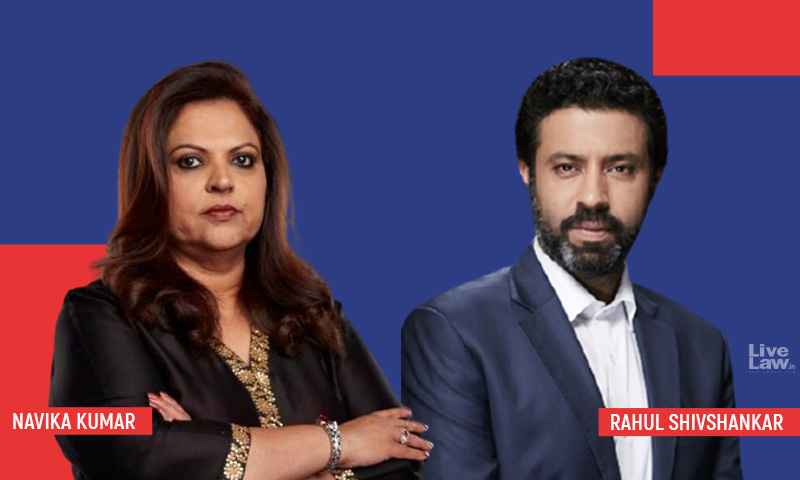 The Delhi High Court on Tuesday issued notice on a rejection of plaint application filed by Bennett Coleman & Co. and journalists Rahul Shivshankar and Navika Kumar, against a suit by The Film andTelevision Producers Guild of India and film production houses for alleged defamatory reporting by Republic TV and Times Now.A Single Bench of Justice J.R. Midha posted the case next on March...

The Delhi High Court on Tuesday issued notice on a rejection of plaint application filed by Bennett Coleman & Co. and journalists Rahul Shivshankar and Navika Kumar, against a suit by The Film andTelevision Producers Guild of India and film production houses for alleged defamatory reporting by Republic TV and Times Now.

Alleging that the Guild is acting as a "front for certain other individuals who have chosen not to approach the Court," the application argues that the suit is an "abuse of process" vide which the Guild is seeking to interfere with the fundamental right of the TV channels and journalists under Article 19(1)(a).

The application moved under Order VII Rule 11(a) and (d) of CPC claims that the court has no territorial jurisdiction to entertain the suit, that there has been improper valuation for the purposes of maintaining the suit and court fees, and that no cause of action has arisen in favour of the producers and against the TV channels and journalists as the plaint allegedly complains of "defamation of unidentifiable group of persons" and therefore no case of defamation is made out.

The application also states that there has been a misjoinder of causes of action and parties and that "no defamatory content has been published by the Defendants herein against the Plaintiffs which amounts to Defamation as alleged or otherwise or at all."

Hammering the valuation of the case for the purposes of pecuniary jurisdiction, the application states that the suit had been randomly valued at Rs.2,00,05,000/- without giving any details as to how or why the particular valuation amount had been arrived at.

34 major Bollywood production houses including the ones owned by famous bollywood stars like Amir Khan, Salman Khan, Ajay Devgan, Yashraj Films, Dharma Productions, Red Chillies Entertainment etc, jointly with four other bollywood associations had approached the High Court against the TVChannels, Republic TV and Times Now for the use of derogatory words and expressions such as "dirt" "filth" "scum" and "druggies" for Bollywood in their media coverage. "This is the dirtiest industry in the country" and "cocaine and LSD drenched Bollywood" are some of the expressions referred to in the plaint.

Senior Adv. Rajiv Nayar appearing on behalf of the production houses had pointed out excerpts from the media reporting of Arnab Goswami before the Court. Expressions like "kingpin of bollywood" "Pakistani funded nepotists" "Bollywood's rotting cabal which uses stolen scripts" were brought to notice of the Court.

He further argued that the defendant channels had started using such expressions for increasing their TRPs and in doing so, had gone 'a step further and produced whatsapp chats' on their shows.

A Single Judge Bench comprising of Justice Rajiv Shakdher of the High Court had on earlier occasion vide order dated 09.11.2020directed the defendants to comply with the rules framed under the Cable Television Network Rules, 1994. The Court also issued directions on the defendants to ensure that "no defamatory content is uploaded on the social media platforms administered by them or is displayed/broadcast on their respective news channels."