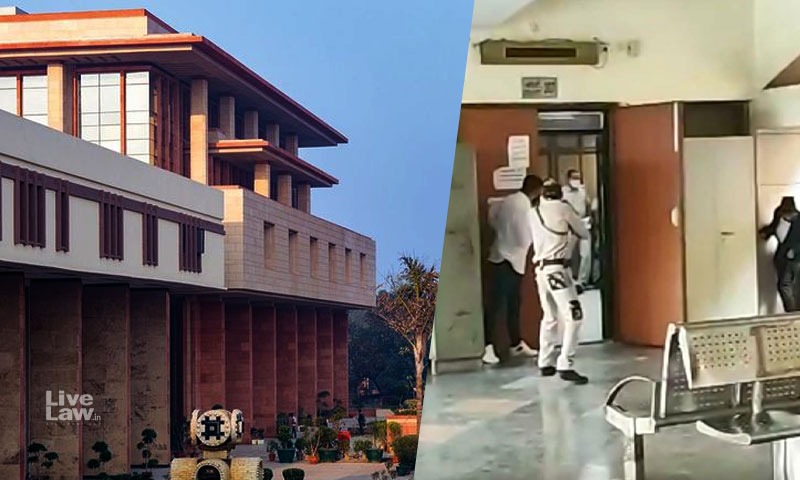 The Chief Justice led bench of the Delhi High Court has taken suo moto cognizance of the recent gun firing incident inside Delhi's Rohini Court hall."This is a grave matter and requires immediate attention," observed the Bench of Chief Justice DN Patel and Justice Jyoti Singh at the outset.It has impleaded the Commissioner of Delhi Police, Ministry of Home Affairs and the Union Law Ministry...

"This is a grave matter and requires immediate attention," observed the Bench of Chief Justice DN Patel and Justice Jyoti Singh at the outset.

All the above stakeholders have been directed to file their suggestions to enhance and strengthen the security measures at all Courts in the national capital.

In its order, the Bench stated:

All the suggestions are to be shared with the Commissioner of Delhi Police, the Court said.

The Bench also made it clear that it is not allowing separate petitions to be filed on this subject and any person interested in the matter is welcome to set forth their suggestions by filing interventions.

Earlier, Justice Rekha Palli had issued notice on a plea seeking directions on Delhi Police and Bar Council of Delhi for taking measures to ensure safety and security of Delhi District Courts, in wake of the firing incident.

Advocate Ajayinder Sangwan for the Bar Council of Delhi had claimed that security of district courts will be made at par with the Supreme Court.

A petition has also been filed before the Supreme Court, seeking directions to the Union of India and State Governments to take immediate steps and measures for security of the Subordinate Courts.

Concerned by the incident, recently, the Advocates Association of Bengaluru wrote to Chief Minister Basavaraj S Bommai seeking protection for all Courts in Karnataka and enactment of the Advocates Protection Act.

A shocking incident of gun-firing took place in a court room in Delhi's Rohini Court on Friday. As per various media reports, Gangster Jitendra Gogi was shot dead in a broad daylight shootout that took place in Rohini court today. Media portals have reported that apart from Gogi, 3 others have been killed in the shootout.

The assailants, who were dressed as lawyers, attacked Gogi when he was brought inside the court room. Witnesses told the media that the judge and the court-staff were present while the horrific incident took place. Visuals of litigants and lawyers fleeing for shelter amidst the shootout have emerged.

The Chief Justice of India has expressed deep concerns at the incident and has spoken to the Chief Justice of the Delhi High Court in this regard. It may be noted that the Supreme Court is considering another suo motu case relating to security of judicial officers and court premises, which was taken in the wake of the killing of Jharkhand Judge Uttam Anand in Dhanbad.

Case Title: Court on its own motion v. Commissioner of Police & Ors.