TV Today v. Newslaundry | Broadcaster Has Right To Fair Comment On Programmes Created By Others, Facet Of Free Speech Under Article 19: Delhi HC 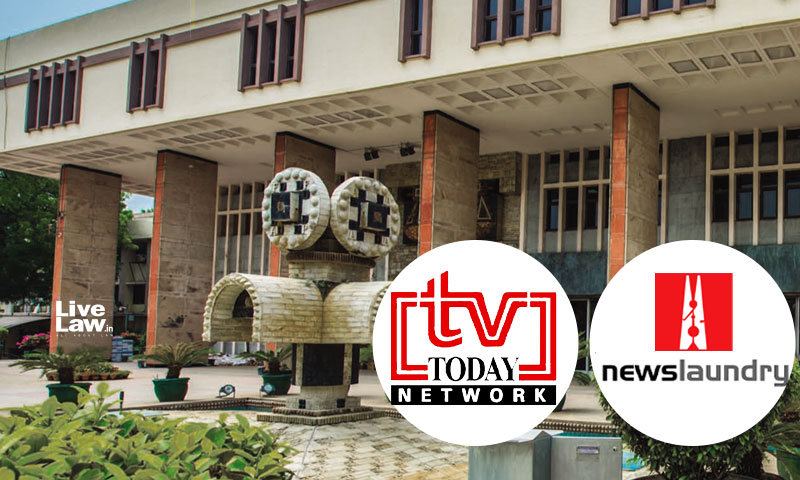 x
Whether comment is satirical or malicious would be established during trial.

While denying interim relief to TV Today Network in the defamation and copyright infringement suit filed by it against news portal Newslaundry, the Delhi High Court has observed that every broadcaster has the right of fair comment on current events and of criticism and review, including of the programmes created by others.Justice Asha Menon further observed that the right to...

While denying interim relief to TV Today Network in the defamation and copyright infringement suit filed by it against news portal Newslaundry, the Delhi High Court has observed that every broadcaster has the right of fair comment on current events and of criticism and review, including of the programmes created by others.

"The defendants No.1 to 9, in the present case, have however asserted another right and that is the unrestricted "right to comment". This right to comment on the content created by others is claimed by them as an exercise in public interest," the Court noted.

The Court was of the view that ex facie, there was no public interest in the particular programming of the content and broadcast by the defendants.

"Every media house and channel on T.V. or the social-media platforms, including that of the defendants No.1 to 9, have their own philosophy, which gets reflected in the manner of reportage and content of the programmes and that is not necessarily a bad thing," the Court observed.

The Court also accepted the argument that the right to comment on content created on social-media or on T.V. channels has also to be recognized as a facet of the right to free speech and expression under Article 19(1)(a).

"In fact, the availability of a multitude of reporting styles, prioritization and presentation of events that occur daily, would always be in public interest, since broadcast is intended to communicate to the public," the Court said.

It added "Dissemination of a spectrum of information by many players would result in a better informed society. Different priorities would result in a range of information being readily available with regard to current events. Varied presentations and discussions would result in the availability of several shades of opinion before the public, which can then come to its own conclusion. It would definitely be in the interest of the public that every broadcaster has the right of fair comment on current events and of criticism and review, including of the programmes created by others."

The suit was filed against Newslaundry, its CEO Abhinandan Sekhri and others, seeking damages of Rs. 2 crores for copyright infringement and defamation of its anchors, management and employees.

The suit alleged that Newslaundry had uploaded various videos on its website including social media platforms, infringing TV Today Network's copyright. It is also alleged that the online news portal also made "unfair, untrue and disparaging defamatory remarks" about its anchors as well as the management.

While stating that the right to privacy and reputation cannot be violated in the garb of freedom to comment, it added that the ability to express an opinion must be freely available for all who hold an opinion.

The Court also said that it is a question to be determined by the trial judge, whether or not the comments and programmes are fair comment or not and that determination can be only after the conclusion of the trial.

On the aspect of satire, the Court said:

"Satire cannot be explained or else it would lose its flavour. Satire allows the satirist to criticize in the harshest of terms and critique actions of all, particularly of those in positions of power and/or authority and leadership. The intention of the satirist is to simultaneously highlight an action and its negative fallout, so that rectificatory action could be taken. It is never intended to disparage or harm reputation and thus is completely devoid of malice."

"Sharp use of language conveys the message intended by the artists, but in a cultured and nuanced manner. Such creative genre must, without doubt, be encouraged and protected. Since the defendants No.1 to 9 claim their programme is satire, they need to explain which one of their programmes is "satire", what portion is "comment" and what justified "criticism". But whether the comment is satirical or malicious would have to be established as a fact and therefore, would require trial and a presumption either way cannot be drawn at this stage."

The Court further observed that the extent of infringement or fair use for fair comment and criticism would also be a matter of trial as each video would have to be considered to determine whether the excerpts are significant to be outright copying, or constitute fair use without infringement.

It added that the contents of the individual videos, the articles, the Facebook and Instagram posts will have to be looked into individually to determine if they contain malicious, dishonest, defamatory and disparaging statements or constitute honest and possible satirical opinion.

"The existence of a few videos with use of words listed in the written submissions of the plaintiff or articles and posts which have been in circulation for a few years now, do not, in the opinion of this Court, constitute exceptional circumstances for the issuance of directions in the nature of mandatory injunction," the Court observed.

"Reporting would, obviously, entail the coverage of current events and current affairs in a particular manner and style, in keeping with the philosophy of the T.V. channel or social-media channel. It is clear that to comment on the act of reporting itself would be covered under criticism or ―review under Section 52 and Section 39 of the Copyright Act and would be protected against allegations of infringement," the Court said.

It added "But, it would be a question of fact whether the reproduction, which is alleged to be an infringing copy, is protected under Section 39 and/or Section 52 of the Copyright Act and is actually in the nature of review and criticism."

The Court was of the view that the broadcast reproduction right would not be infringed even on account of re-broadcast with any necessary adaptations and modifications, which do not constitute infringement of copyright under sec. 52 of the Act.

"In other words, the provisions of Section 39 will need to be read along with Section 52 whereunder, ―fair dealing‖ for private or personal use, for criticism or review of that work or any other work, or reporting of current events and current affairs, have also been excluded from acts of infringement," the Court said.

It added, "Of course, there are several other provisions which exclude acts as non- infringing, but in respect of broadcasting, the additional provisions would be Section 52(1)(z)(za) and (zb), but these two have no immediate bearing on the issue involved in the present matter."

On the issue of commercial disparagement, the Court that the programmes of the defendants must not be showing the TV Today's programmes in poor light, asking viewers to stop watching their channels while claiming their own to be the best.

"This, of course, will again be a question of fact as to whether commercial disparagement has occurred or not. The ―defence of truth‖, it may be noted, would be available as an absolute defence to the plea of defamation/disparagement. This defence too is to be established during trial," the Court said.