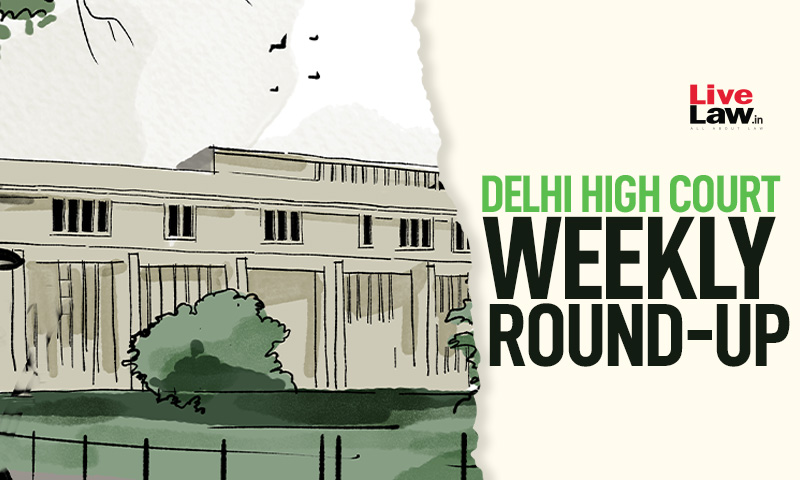 A vacation bench comprising of Justice Dinesh Kumar Sharma added that the Senior Vice President will take over the duties and responsibilities of the President and shall also perform any other tasks or functions as directed by the President, the Executive Council or the General Meeting.

"This Court considers that the functioning of Sports Federation should be above any kind of doubt. The purity in the functioning of such federations are much more important, than the individual who hold the positions," the Court observed.

The Delhi High Court has ordered suspension of the domain name as well as blocking access to the website www.myvoltascare.com in a trademark infringement suit filed by home appliance company- Voltas.

A vacation bench comprising of Justice Dinesh Kumar Sharma restrained owner of the website from using the registered and well-known trademark VOLTAS and its logo including the Website or listings on social media websites or e-commerce sites.

The Court was dealing with a suit filed by Voltas Limited seeking permanent injunction restraining one Ashok Kumar from infringing its registered trademark through the website www.myvoltascare.com.

3. "Every Day Of Freedom Matters": Delhi High Court Modifies Condition For Suspension Of Sentence To Personal Bond For Convict Unable To Furnish Surety

Granting relief to a woman convict, the Delhi High Court recently modified a suspension of sentence condition for deposit of surety bond to deposit of a personal bond instead, on account of her being unable to furnish the surety.

Observing that every day of freedom matters, Justice Jasmeet Singh was of the view that the accused cannot be made to stay in jail for the reason that she could not furnish surety.

4. 'May Cause Mental Trauma': Delhi High Court Refuses To Interfere With Child's 9 Days' Custody To Mother For Foreign Travel

The Delhi High Court has observed that in matters relating to custody of children, Court has to give paramount consideration to the welfare of the children.

A vacation bench comprising of Justice Dinesh Kumar Sharma was dealing with a plea challenging an order dated June 8, 2022 passed by the Family Court whereby the Court permitted the mother to take the child to Malaysia for a period of nine days.

The Family Court had added that the mother shall bring back the child to Delhi positively on July 3 for her to attend the school which would reopen after summer vacations. The had Court also directed both the mother and father to strictly adhere to the custody and visitation schedule in terms of its earlier judicial orders.

5. Power Under Section 9 Of The A&C Act Cannot Be Exercised For Directing Specific Performance Of The Contract: Reiterates Delhi High Court

The Delhi High Court has reiterated that power under Section 9 of the Arbitration and Conciliation Act, 1996 (A&C Act) cannot be exercised for directing specific performance of the contract itself.

The Division Bench of Justices Jyoti Singh and Anoop Kumar Mendiratta held that a direction to the opposite party to extend the contract for a further period would amount to granting specific relief of the contract, which is beyond the scope of the powers of the Court under Section 9 of the A&C Act. The Court ruled that power under Section 9 can only be exercised for preservation of the subject matter of the dispute till the decision of the Arbitral Tribunal.

The Delhi High Court has recently issued notice on a plea challenging the practice of Talaq-e-Hasan as being unconstitutional and arbitrary as well as contrary to the United Nations Conventions of Human Civil Rights.

As per Talaq-E-Hasan, a Muslim man can divorce his wife by pronouncing "talaq" once a month for three months.

A vacation bench comprising of Justice Dinesh Kumar Sharma sought response of the Delhi Police as well as a muslim man whose wife has approached Court challenging the notice of Talaq-e-Hasan received by her.

"The process of appointment over the years has become more time consuming and more uncertain. This has dissuaded many meritorious senior advocates and other advocates from giving their consent to be considered by the Collegium of High Court for recommending their names for judgeship," said Acting Chief Justice Vipin Sanghi in his farewell function organized by the Delhi High Court this week.

"In my humble view, this aspect needs to be urgently addressed if we wish to attract the best talent to the Bench," he added.

Justice Sanghi, who has now been transferred as Chief Justice of Uttarakhand High Court, was appointed as Additional Judge of the High Court of Delhi with effect from May 29, 2006 and was confirmed as a Judge on 11th February, 2008.

After having served as a Judge of Delhi High Court for over 16 years, Justice Sanghi today bid farewell with an appeal to the judges of lower as well as higher judiciary of Delhi, to give their best to achieve the objective of justice dispensation with honesty, integrity and independence.

Lieutenant Governor Vinai Kumar Saxena administered the oath to Justice Sharma at Raj Niwas, which is the secretariat of LG.

Justice Sharma was previously serving as the Chief Justice of the Telangana High Court. His transfer was notified by the Central Government on June 19, 2022.

The Delhi High Court has ordered status quo on the Delhi Development Authority's proposal to demolish jhuggi clusters in city's Gyaspur area in Hazrat Nizamuddin. A vacation bench of Justice Neena Bansal Krishna granted the interim relief in a plea moved by the residents.

"Considering the long possession of the parties and their assertions that it is a Jhuggi cluster having more than 32 jhuggis, the respondents are directed to maintain status quo till 11th July, 2022", the bench ordered.

The Court ordered status quo till July 11, the next date of hearing.

The Delhi High Court this week issued notice on the plea filed by Alt News Co-Founder Mohammed Zubair challenging his four days police custody remand granted by a Trial Court here. He was arrested earlier this week by the Delhi Police for allegedly hurting religious sentiments and promoting enmity over a tweet made in 2018.

Justice Sanjeev Narula observed that the remand order was for a period of four days, ending tomorrow, and that he will be produced before the concerned court on July 2. During the hearing, the Judge orally remarked that the matter has a very limited "shelf life" since the remand will end on Saturday.