Delhi Riots- "CCTV Footage In Itself Not Sufficient To Prolong Incarceration": Delhi HC Grants Bail To Man In Jail For 17 Months 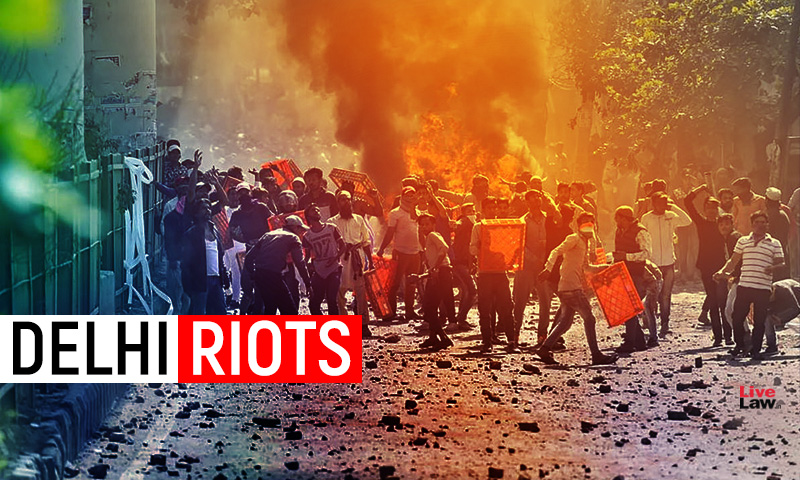 The Delhi High Court today granted bail to a man in the Head Constable Ratan Lal Murder Case (during the Delhi Riots) underscoring that he had been in jail for 17 months and that it is against the principles enshrined in the Constitution to allow an accused to remain languishing behind bars during the pendency of the trial.The Bench of Justice Subramonium Prasad granted bail to one Mohd....

The Delhi High Court today granted bail to a man in the Head Constable Ratan Lal Murder Case (during the Delhi Riots) underscoring that he had been in jail for 17 months and that it is against the principles enshrined in the Constitution to allow an accused to remain languishing behind bars during the pendency of the trial.

The Bench of Justice Subramonium Prasad granted bail to one Mohd. Saleem Khan in connection with the murder of Head Constable Ratan Lal and causing head injuries to a DCP during the North-East Delhi riots that rocked the national capital last year. (FIR 60/2020 PS DayalPur).

Allegations against the accused

As per the charge sheet, the Petitioner is a socially active person, and that messages had been circulated in the Muslim community that the Citizenship (Amendment) Act, 2019, was promulgated in order to strip off Muslims of their Indian citizenship.

During the protest, DS Bindra, an advocate, started a community kitchen due to which a crowd would assemble, and that this crowd included the Petitioner, along with Salman Siddiqui, Dr. Rizwan, Salim Munna, and others.

The charge sheet states that Bindra instigated the Petitioner and others to oppose the Act and stressed that people should take to the streets to show their dissent and as a consequence, the Petitioner and his associates got tents, banners, etc.

It is stated in the charge sheet that on the day of the alleged incident, the Petitioner and his associates planned to block the road and to assault the police in case they attempted to intervene.

A perusal of the video footage on record revealed that the Petitioner herein, who was wearing a white shirt, black coat, and black pants, was identified on a camera wherein he was seen turning away the CCTV camera with the aid of a wiper. The Petitioner was further identified on another where he was seen inciting and provoking the public to join the protest.

In the instant case, the Court noted, the issue was whether a case for criminal conspiracy for an allegation of murder, i.e. Section 120B IPC read with Section 302, was made out against the Petitioner. Therefore, the Court analyzed the facts of the case to discern as to whether ingredients were available to establish that there was indeed a conspiracy in place to which the petitioner was a party.

"While the Petitioner has clearly been identified in both Camera...wherein he is seen dislocating a CCTV camera and inciting the crowd, respectively. The fact that the petitioner was part of the conspiracy or not can be ascertained only after evidence is led. Even though Section 120-B IPC is prima facie applicable in the instant case and the usage of a wiper to turn away the CCTV camera implies that the Petitioner may have been in the know-how of the impending riots, the extent to which the charge can be added against the Petitioner cannot be deconstructed by this Court at this point and is a matter of trial. This Court is of the opinion that this footage in itself is not sufficient to prolong the incarceration of the Petitioner," the Court observed

Importantly, regarding the grant of bail, the Court noted thus:

"It is the Constitutional duty of the Court to ensure that there is no arbitrary deprivation of personal liberty in the face of excess of State power. Bail is the rule and jail is the exception, and Courts must exercise their jurisdiction to uphold the tenets of personal liberty, subject to rightful regulation of the same by validly enacted legislation. The Supreme Court has time and again held that Courts need to be alive to both ends of the spectrum, i.e. the duty of the Courts to ensure proper enforcement of criminal law, and the duty of the Courts to ensure that the law does not become a tool for targeted harassment."

Therefore, noting that no video recordings or audio recordings have been placed on record can verify the contention that the Petitioner was embroiled in disseminating hate speech, the Court opined that the Petitioner cannot be made to languish behind bars for a longer period of time, and that the veracity of the allegations leveled against him can be tested during trial.

Hence, he was granted bail on furnishing a personal bond in the sum of ₹35,000/- with one surety of the like amount to the satisfaction of the Trial Court/Duty Magistrate.

FIR 60/2020 was registered on the statement of a Constable stating that on 24th February last year, he was on the law and order arrangement duty with other staff members at Chand Bagh area.

It was stated that around 1 PM protesters carrying danda, lathies, baseball bats, iron rods and stones started gathering at the main Wazirabad road and did not pay heed to the directions of senior officers thereby became violent.

It was further stated that after repeated warnings to the protestors, mild force and gas shells were used to disperse the crowd. According to the Constable, violent protesters started beating people as well as police personnel, due to which he himself sustained injury on his right elbow and hand.

He also stated that the protestors attacked DCP Shahdara, ACP Gokulpuri, and Head Constable Rattan Lal due to which they fell on the road and sustained grievous injuries. All the injured persons were taken to hospital, where it was found that HC Rattan Lal had already died due to injuries sustained and DCP Shahdara was unconscious and had sustained head injuries.

In related news, while denying bail to Mohd. Ibrahim in Head Constable Ratan Lal Murder Case, the Delhi High Court has observed that the riots which took place in North East Delhi in February 2020 did not take place in a "spur of the moment" and was a "calculated attempt to dislocate the functioning of the Government as well as to disrupt the normal life".