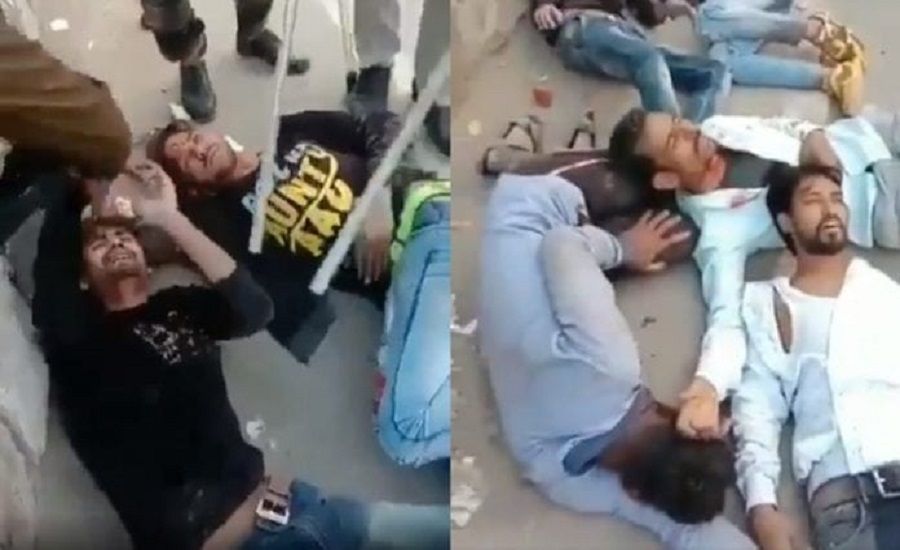 The Delhi High Court on Tuesday questioned the the city Police over its investigation into an incident where a man, 23 year old Faizan, was forced to sing the national anthem during the Delhi riots that erupted in the year 2020.The incident relates to a video that had gone viral wherein Faizan could be seen allegedly being beaten by the police while being forced to sing the national anthem...

The Delhi High Court on Tuesday questioned the the city Police over its investigation into an incident where a man, 23 year old Faizan, was forced to sing the national anthem during the Delhi riots that erupted in the year 2020.

The incident relates to a video that had gone viral wherein Faizan could be seen allegedly being beaten by the police while being forced to sing the national anthem and 'Vande Mataram'.

Remarking that the status report filed by the Delhi Police was neither here nor there, Justice Mukta Gupta quizzed the police over confusion and discrepancies with regards to increase in the number of injuries in the MLC which was prepared prior to the deceased's detention in police custody and the post mortem report.

The Court questioned the Police that while the MLC recorded only three injuries, the same were increased to a number of twenty injuries in the post mortem report.

The Court was dealing with a plea filed by Kismatun, Faizan's mother, seeking a SIT probe into her son's death, who along with four other Muslim men, was seen in the video. Kismatun claims in her plea that the police had illegally detained her son and denied him critical health care as a result of which he succumbed to injuries on February 26, 2020.

During the course of hearing today, Advocate Vrinda Grover appearing for the petitioner submitted that vide order dated January 11, 2022, the Police was directed to file a comprehensive detailed status report as evasive replies were continued to be filed by the it in the matter.

At the outset, the Delhi Police apprised the Court that it had filed a status report in sealed cover.

Taking the Court through the facts of the case, Grover argued that the case pertained to a hate crime wherein a young 23 year old boy was beaten mercilessly and later died.

"I am a little surprised with this sealed cover. I am mother of the deceased victim here. If it was not for my petition, there would have been no investigation whatsoever. Today, it is being filed in a sealed cover," she added.

To this, Delhi Police apprised the Court that the reason for filing the report in a sealed cover was that the accused persons were identified and details of investigation have been provided in the same. The Police also said that the report contained details of the persons involved and that the identification process has been done in the matter.

"You have done your level best. These were five children. One has died, four are still surviving. Have you got it identified from them? You are doing everything in the world, in any case, the police will start investigation of the case from an eye witness. It is an offence of murder, right. In this case you will not take help of the eye witness but you will investigation all over the world."

"If these were the four eye witnesses, till date you've not bothered to take statements. What is the kind of investigation you have taken?" she remarked, further asking if the Police had conducted any Test Identification Parade (TIP) in the matter.

She added "Why don't you get their statements recorded before the Magistrate, so that there is some authenticity?"

Thereafter, Grover also took the Court through the two phases regarding the condition of the deceased victim. She submitted:

"When we have repeatedly asked for those documents to be sealed, the last supplementary status report uses a very peculiar and at least to my understanding, a new phraseology which says data relating to these registers has been preserved."

"In a trial, what is data if I don't have the document? The document is in their control. They don't seize those documents. They file evasive replies. They put us on a wild goose chase. There is no investigation into Jyoti Nagar police station at all."

"I am beaten by the police and I will ask the police to put me into custody!! Let me for a moment take this completely facetious plea of theirs. I am beaten black to blue. I am returning with them from GTB hospital. They do not provide me medical treatment. I die after I am released."

On the asking of the Court as to what was the medical treatment provided to the deceased at GTB hospital, the Delhi Police apprised the Court that there were two wounds which were present at the time when MLC was conducted and that treatment happened thereafter.

"In the post mortem report these two wounds are there," the Police added.

Accordingly, while directing Grover to peruse the status report in the court on the next date of hearing, the Court posted the matter for further hearing on March 15.

The Petitioner was represented by Advocates Vrinda Grover and Soutik Banerjee.

Earlier, the Court had questioned the delay in investigating by the Delhi Police in the matter after which it had sought a detailed status report in the probe under the signature of the concerned Deputy Commissioner of Police.

Previously, the court had directed the police to file an affidavit with information about the CCTV cameras' functioning in the relevant month and about the preservation of relevant documents.

The Police had also told the court that they had failed to establish the identity of the officers in the video footage as they were wearing helmets and did not have name plates.