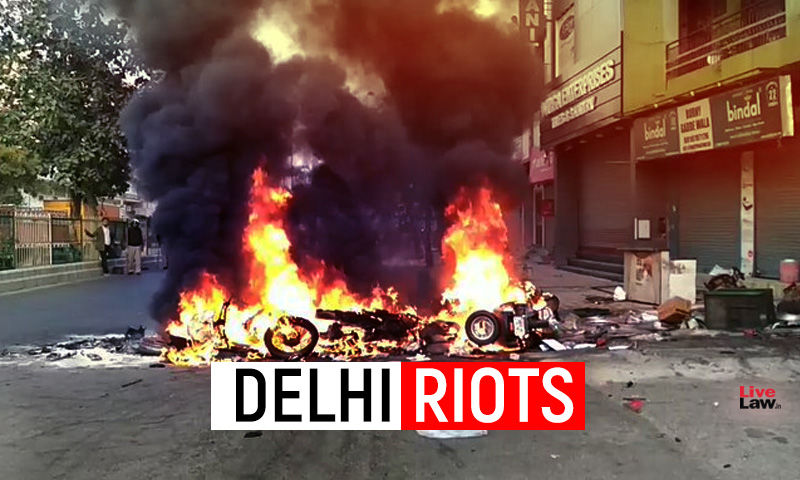 The Delhi High Court on Tuesday issued fresh notices on the applications seeking impleadment of various political leaders to be added as party respondents in the pleas seeking registration of FIRs against politicians for alleged hate speeches during 2020 Delhi riots.A division bench comprising of Justice Siddharth Mridul and Justice Rajnish Bhatnagar issued fresh notice on the...

The Delhi High Court on Tuesday issued fresh notices on the applications seeking impleadment of various political leaders to be added as party respondents in the pleas seeking registration of FIRs against politicians for alleged hate speeches during 2020 Delhi riots.

The development came after the Court noted that the earlier notices could not be served upon the proposed respondents owing to the non payment of process fees by the petitioners.

At the outset, the Court noted that the NGO lawyers voice was unable to serve notices to 9 of the proposed respondents due to non availability of addresses.

"On the petitioner taking steps of filing process fee as well as furnishing addresses qua proposed respondents no. 15-23 both within two days from today, let notice issue to said proposed respondents," the Court ordered in the impleadment application moved by Lawyers Voice.

During the course of hearing today, the Court expressed its displeasure over the manner in which the petitioners' counsel were pursuing the matter as also non-payment of process fee. The Court also remarked that it seemed like there was no solemnity attached to the petitions.

"This is that matter where the Supreme Court at your instance directed this to be disposed of within specific time period. And you don't take the step of paying process fee," Justice Mridul orally told counsel appearing for petitioner Shaikh Mujtaba.

Justice Mridul further emphasized that till the time the impleadment applications are not decided and appropriate parties (if any) amongst the proposed respondents are not before the Court, the petitions will not be heard on merits.

"You are making allegations against certain individuals and now they are not before us as you did not file process fees and notice is not issued to them. We need all material of service on record before we proceed. You don't seem to be in a hurry to go ahead with the matter," the Court remarked at the outset.

Justice Mridul added "The thing is if this goes on for too long, you will then again file an application before Supreme Court saying that High Court is taking too long."

Accordingly, the Court posted the impleadment applications as well as other linked petitions for further consideration on April 29.

The Court was hearing bunch of pleas seeking independent SIT investigation into the North East Delhi Riots of 2020. The pleas also seek registration of FIRs against politicians for alleged hate speeches and action to be taken against errant police officials.

The development came after the Court on one of the previous dates of hearing granted liberty to two of the petitioners namely Lawyers Voice and Shaikh Mujtaba Farooq to implead proper and necessary parties in their pleas with regards to the specific allegations of hate speeches by various political figures.

One of the petitions filed by Jamiat Ulama-e-hind seeks an impartial investigation into the cases by a Special Investigation Team, headed by a retired Supreme Court or Delhi High Court judge. It is demanded that members of the Delhi Police shall be excluded from this SIT.

In addition to the SIT, the petition also seeks a separate and 'especially empowered body' to enquire into all aspects of planning, preparation and causing of the riots.

The petition moved by Ajay Gautam has asked for National Investigation Agency to investigate the funding and sponsoring of protests against the Citizenship Amendment Act.

Petitioner had also claimed that these protests are allegedly funded by PFI, which as per him is an anti-national organization, and the same are supported by political parties such as Congress and Aam Aadmi Party.

In addition to these claims, the Petitioner had also asked for FIR to be registered against political leaders such as Waris Pathan, Asaduddin Owaisi and Salman Khurshid, for allegedly making inflammatory and hate speeches.

The petition filed by Brinda Karat seeks independent investigation into the complaints alleging acts, offences and atrocities by members of the police, RAF or state functionaries in relation to the riots.

In December last year, the Supreme Court had asked the Delhi High Court to decide expeditiously, preferably within three month one of the petitions seeking FIR and investigation against politicians.