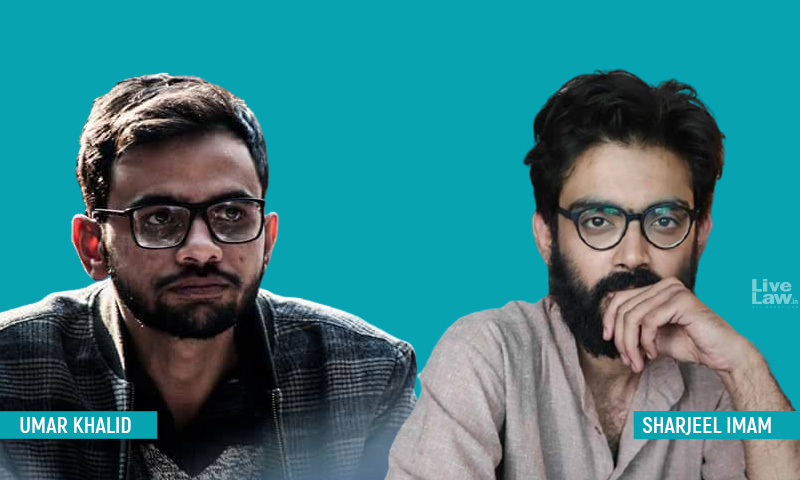 A division bench comprising of Justice Siddharth Mridul and Justice Rajnish Bhatnagar will now be hearing bail pleas of Umar Khalid and Sharjeel Imam on May 19 and 24, respectively.

"In the meantime, parties are at liberty to place on record all docs as may be relevant for adjudication of the appeal within one week from today with advance copy to other side."

The bench also adjourned hearing in the plea filed by Sharjeel Imam, seeking bail in a case relating to the alleged inflammatory speeches made by him in Aligarh Muslim University and Jamia area in Delhi against the Citizenship Amendment Act (FIR 22/2020).

The matter will now be heard on May 26, along with Sharjeel's challenge to the Trial Court order framing charges against him the the concerned FIR.

During the course of hearing today, Advocate Tanveer Ahmed Mir appearing for Sharjeel placed reliance on an order passed by single judge of Allahabad High Court granting bail to Imam in a case concerning one of the speeches forming part of the FIR in question.

Accordingly, the Bench asked Mir to place on record both the FIRs (registered in Aligarh and New Delhi) and relevant chargesheets on record for the perusal of the Court.

Earlier, Justice Rajnish Bhatnagar had asked Pais if it was proper to use the word 'jumla' against the Prime Minister of India.

"This word jumla is used against the Prime Minister of India. Is it proper?", Justice Bhatnagar had orally asked. Pais had responded that it is not illegal to be critical of the government or polices of the government.

On the previous occasion, the bench, after reading the transcript of the speech, had observed that the speech was prima facie "obnoxious" and "offensive".

Opposing the appeal, the prosecution had earlier told the Court that the "narratives" sought to be created by Khalid cannot be looked into as his defence at the stage of bail.

In the short reply filed, the prosecution had further said that to view Khalid's role in isolation in the case of conspiracy will be impermissible in law.

The prosecution also referred to the trial court orders dismissing bail pleas of co-accused namely Shifa-ur-Rehman and Khalid Saifi to argue that the same would clearly demonstrate the length and breadth of the conspiracy, role played by different entities, WhatsApp Groups and individuals in pursuance to the said conspiracy.

Accordingly, the prosecution had submitted that the appeal raises no good grounds for consideration by the High Court and thus, must be dismissed.

Read summary of their arguments before the trial court here.