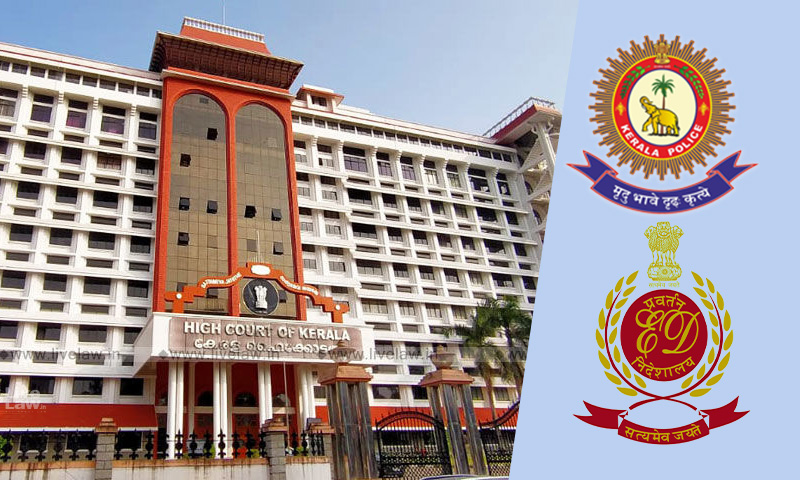 The Kerala High Court today extended its interim order restraining coercive action against officials of the Enforcement Directorate (ED) in the cases lodged against the agency by the Kerala Police. The writ petitions against FIRs registered by the Kerala Police were taken up before a Bench of Justice VG Arun today, saw submissions by Senior Advocate Harin Raval on behalf of the...

The Kerala High Court today extended its interim order restraining coercive action against officials of the Enforcement Directorate (ED) in the cases lodged against the agency by the Kerala Police.

The writ petitions against FIRs registered by the Kerala Police were taken up before a Bench of Justice VG Arun today, saw submissions by Senior Advocate Harin Raval on behalf of the Kerala Police.

The petitions filed by P Radhakrishnan, Deputy Director of ED (Kochi Zone) challenge FIRs lodged against officials of the ED for allegedly coercing gold smuggling accused Swapna Suresh and Sandeep Nair to make false statements against the Chief Minister and other State Ministers.

Rebutting the contentions made by the Solicitor General Tushar Mehta, Additional Solicitors General SV Raju and KM Nataraj on the last occasion, Senior Advocate Harin P Raval continued submissions advanced at the previous hearing. In the course of his arguments today, he sought to bring into question the maintainability and entertainability of the writ petition at a nascent stage of investigation and the existence of alternative remedies as and when there were apprehensions of coercive action against the petitioner.

Drawing from the Solicitor General's assertion that the FIRs disturbed cooperative federalism, he averred that the officials of central agencies on the other hand had to place more faith in the integrity of the state's officers, who were investigating the cases at hand.

He emphasized that framing evidence or coercing an accused were outside the scope of duties of an officer and could be investigated.

Contending that an attempt was made at creating a smokescreen that the State was investigating the Central Agency, he averred that all that was being investigated was the audio clip supposedly containing Swapna Suresh's voice.

"What is done? There was an audio clip...ED itself asked us to investigate the audio clip! In the course of investigation we filed FIR"

He additionally posited that the submissions that the FIRs were filed on mala fides could not be countenanced since the investigation is at a nascent stage.

If the petitioner had an apprehension that he would be arrested or coercive action would be taken out against him, he can approach the Court at the appropriate stage seeking a stay, Senior Advocate Raval pointed out.

As to the second FIR, Senior Advocate Raval vehemently contended that the said FIR arose out of an independent set of facts, namely, a letter written by gold smuggling accused Sandeep Nair alleging he was coerced. After this letter was brought to the notice of the crime Branch, the FIR was registered, he stated.

"Accused's statement is shocking, I will produce it in a sealed cover", he additionally informed the Court.

The Senior Advocate informed the Court that the jurisdictional magistrate was yet to record Nair's Section 164 Statement and only after that the further course of action in the case would be decided.

Contending that the Deputy Director was approaching the Court to cover up involvement in the case, the Senior Advocate underscored that the FIRs did not name any official and that the investigation was still at a nascent stage.

Does my Lord want to conduct a mini-trial at this stage?, he posed to the Court.

After the Court expressed that the case hearing could be continued on Friday, the counsel assented.

The remainder of the hearing, along with Senior Advocate Harin Raval's concluding submissions will be heard tomorrow, that is on Friday, April 9, 2021.