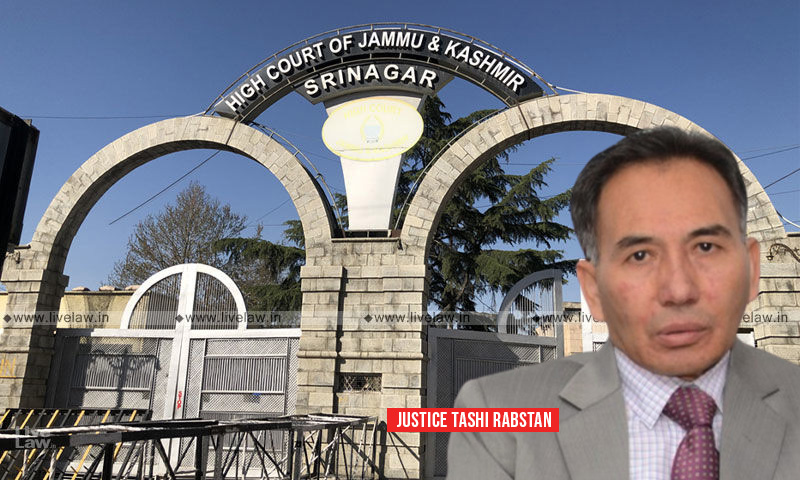 While upholding the detention of one Muntazir Ahmad Bhat, an alleged worker of Jaish-e-Mohammad (JeM), under the J&K Public Safety Act, 1978, the Jammu & Kashmir And Ladakh High Court on Friday observed that extremism, radicalism, terrorism have become the most worrying features of the contemporary life.The Bench of Justice Tashi Rabstan further observed that the basic edifices of...

While upholding the detention of one Muntazir Ahmad Bhat, an alleged worker of Jaish-e-Mohammad (JeM), under the J&K Public Safety Act, 1978, the Jammu & Kashmir And Ladakh High Court on Friday observed that extremism, radicalism, terrorism have become the most worrying features of the contemporary life.

The Bench of Justice Tashi Rabstan further observed that the basic edifices of a modern State, like democracy, State security, public order, rule of law, sovereignty and integrity, basic human rights, etcetera, are under attack of such extreme, radical, and terror acts.

The District Magistrate Pulwama on July 12, 2021, placed one Muntazir Ahmad Bhat, detenue/present petitioner under preventive detention with a view to preventing him from acting in any manner prejudicial to the security of the State.

As per the ground of detention, the detenu met with various terrorists of Jaish-e-Mohammad (JeM) under whose influence the detenu developed radical ideology and he got motivated to work for their unlawful organization and extend all possible logistic support to the terrorists enabling them to carry out the terrorist attack in the area successfully.

Allegedly, he is also an associate of an active terrorist namely Yasir Ahmad Parray and on the instruction of a Pakistani Terrorist, they loaded a Maruti car with IED and exploded it on the road, which resulted in the martyrdom of 1 army person and injuries to various army personnel.

Pursuant to that, a case was registered against him under Sections 302, 307-RPC, 7/27 Arms Act, and 4/2015 Expl. Sub. Act, however, later on, he was released on bail, and thereafter, he continued to carry out subversive activities in the area.

In another case, 1 HE-36 hand grenade was recovered from the compound of his house and for that, a case under Sections 7/25 of Arms Act and 23 UA(P) Act was registered against him, however, since he was again granted bail, he was placed under detention.

Challenging his detention, the father of the detenu moved to the High Court seeking quashing of the detention order. It was argued that he was put under detention on false and flimsy grounds and that the grounds of detention are vague and mere assertions of the detaining authority.

Further, the Court observed that the court need not go into the questions whether the facts mentioned in the grounds of detention are correct or false because to decide that, the Court added, evidence may have to be taken by the courts and that it is not the policy of the law of preventive detention as that matter lies within the competence of the advisory board.

Significantly, observing that the contemporary extremism, radicalism, terrorism in their full incarnation have obtained a different character and poses extraordinary threats to the civilized world, the Court further observed thus:

"The threat that we are facing is now on an unprecedented global scale. Terrorism has become a global threat with global effects. It has become a challenge to the whole community of civilized nations. Terrorist activities in one country may take on a transnational character, carrying out attacks across one border, receiving funding from private parties or a government across another, and procuring arms from multiple sources."

Further, stressing that Terrorism in a single country can readily become a threat to regional peace and security owing to its spillover ramifications, the Court added thus:

"It is, therefore, difficult in the present context to draw sharp distinctions between domestic and international terrorism. Many happenings in the recent past caused the international community to focus on the issue of terrorism with renewed intensity. Anti-fanatism, anti-extremism, antiterrorism activities in the global level are mainly carried out through bilateral and multilateral cooperation among nations. It has, in such circumstances, become our collective obligation to save and protect the State and its subjects from uncertainty, melancholy and turmoil."

Lastly, opining that the petition was shorn of any merit, the Court, while dismissing the plea, observed that Preventive detention is devised to afford protection to society.

"The authorities on the subject have consistently taken the view that preventive detention is devised to afford protection to society. The object is not to punish a man for having done something but to intercept before he does it, and to prevent him from doing so," the Court added.