x
The sanctioning authority as well as the State are expected to scrupulously stick to the time frame, particularly in view of the very stringent provisions of the Act.

In a notable judgment, the High Court of Kerala has discharged alleged Maoist leader Roopesh of charges under Unlawful Activities Prevention Act and sedition under Section 124A of the Indian Penal Code on the ground of irregularities in the order granting sanction for prosecution.The Court was considering three revision petitions filed by Roopesh challenging the orders of the Sessions...

In a notable judgment, the High Court of Kerala has discharged alleged Maoist leader Roopesh of charges under Unlawful Activities Prevention Act and sedition under Section 124A of the Indian Penal Code on the ground of irregularities in the order granting sanction for prosecution.

The Court was considering three revision petitions filed by Roopesh challenging the orders of the Sessions Court Kozhikode that dismissed his applications seeking discharge funder Section 227 of the Code of Criminal Procedure.

The single bench of Justice Raja Vijayaraghavan found that the time limit prescribed under Section 45(2) of the UAPA read with Rules (3) and (4) of the Recommendation Rules 2008 were not followed by the sanctioning authority while granting sanction to prosecute Roopesh in three cases.

As per these provisions, the Investigating Officer should submit its report of recommendation to the State Government within seven working days of the receipt of evidence gathered by and that the State Government should, under sub-section (2) of Section 45 of the Act, take a decision regarding sanction for prosecution within seven working days after receipt of recommendations of the Authority.

The counsel for the petitioner Advocate K S Madhusoodhanan pointed out that the sanction orders were issued by the State Government several months after the State Police Chief submitted the recommendations.

The prosecution submitted that the delay occurred as the Chairman of the Review Authority under UAPA, Justice(Retd) P S Gopinathan, was preoccupied with with Puttingal Temple  Tragedy Enquiry Commission.

Since the UAPA has stringent provisions, the procedure prescribed under it has to be followed strictly, the Court held. The word 'shall' in Section 45 has to be construed as mandatory.When the Act prescribes a procedure substantially departing from the prevalent ordinary procedural law, the provisions cannot be considered in a liberal manner to the detriment of the accused, the Court said.  It observed that the failure of the authorities to comply with the procedure resulted in "failure of justice" especially when the petitioner was undergoing imprisonment since December 2015.

"When the penalty provided is extremely stringent and the procedure for trial prescribed is compendious, the sanctioning process mentioned under Section 45 of the Act and under the Recommendation Rules, 2008 must have to be adopted very seriously and exhaustively than the sanction contemplated in other penal statutes, as has been held by the Apex Court in Rambhai Nathabhai Gadhvi and Ors. vs. State of Gujarat .

The explanation offered for non compliance with the stringent statutory provisions is that the Chairman of the authority was pre-occupied with other matters. This is totally unacceptable, particularly in view of the fact that the petitioner has been undergoing incarceration in a very serious offence from December, 2015 onwards. I have no doubt in my mind that the failure of the respondents to scrupulously comply with the statutory stipulations has resulted in failure of justice."

The sanctioning authority as well as the State are expected to scrupulously stick to the time frame, particularly in view of the very stringent provisions of the Act, added the Court.

One of the cases was registered in 2013 and others in 2014. The allegation was that Roopesh, along with members of the banned Maoist organization, distributed pamphlets containing "seditious writings" in tribal colonies in Wayanad district. It was further alleged that they had threatened the members of colony and entered some of the houses demanding food.  Apart from sedition and UAPA offences, they were booked for offences of unlawful assembly and criminal intimidation (Sections 143, 147, 148, 506(ii) r/w. Section 149 of the IPC) and Section 25(1A) of the Arms Act. 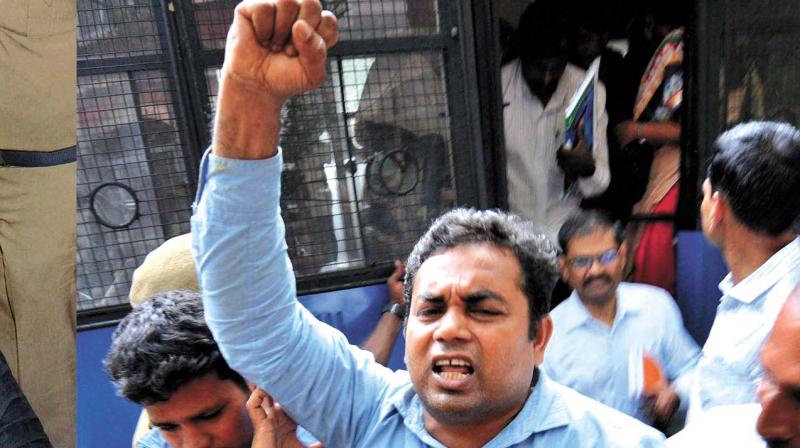 Roopesh, when produced before trial Court (2016)

No application of mind in sanction order for sedition charge

The Court discharged the petitioner of sedition charge on the finding that there was no application of mind in the sanctioning order regarding the applicability of Section 124A IPC.

The three sanction orders were composite orders for charges under UAPA and Section 124A IPC. They did not expressly refer to Section 124A IPC, and merely said sanction was granted "also for the relevant sections of the Indian Penal Code".

As per the Court, this "casual expression", showed lack of independent application of mind.

Prosecution for sedition can be launched only on the basis of sanction from the competent authority as per Section 196 of the Code of Criminal Procedure.

"The order itself states that it has been issued in exercise of the powers under Section 45(2) of the UAP Act and no reference is made to Section 124A of the IPC or of the requirement under Section 196(1) of the Cr.P.C. A casual mention that sanction is accorded for the relevant provisions of the IPC may not suffice, in view of the serious incidents of Section 124A of the IPC and the procedural requirement under section 196(1) of the Cr.P.C. Since grant of sanction is not a mere formality, the provisions must be observed with utmost strictness keeping in mind the public interest and the protection available to the accused against whom the sanction is sought. Consideration of the material implies application of mind.

Therefore, the order of sanction must ex facie disclose that the sanctioning authority had considered the evidence and other materials placed before it."

Based on the above findings, the Court held that the sanction granted to prosecute the petitioner was "vitiated or non compliance with the mandatory provisions in the Act and Rules and, therefore, the taking of cognizance by the court below for the offences under Sections 20 and 38 of the UAP Act is vitiated."

It was added that  Sessions Judge had no jurisdiction to take cognizance of the offence under Section 124A of the IPC without a valid sanction order under Section 196(1) of the Cr.P.C