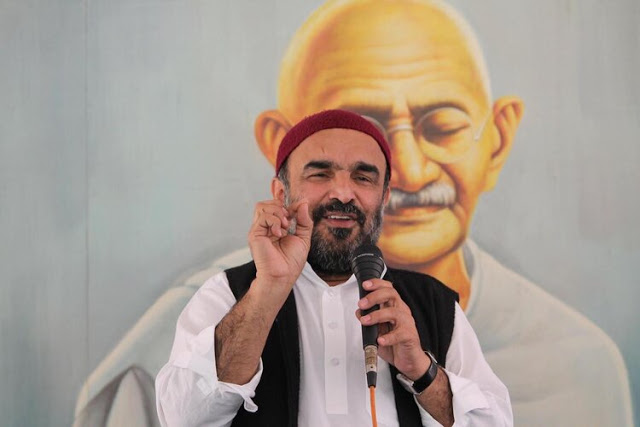 x
"Didn't enter into the sanctum sanctorum of Temple, performed Namaz with the permission of priest of Temple", Khan argued.

Peace Activist Faisal Khan, who was arrested for offering Namaz inside the premises of the Nand Baba temple in Mathura (Uttar Pradesh) has been granted bail by the Allahabad High Court on Friday (18th December). The Bench of Justice Siddharth gave this order while hearing the bail application of Faisal Khan praying that he be release on bail in Case Crime No. 390 of 2020, under...

Peace Activist Faisal Khan, who was arrested for offering Namaz inside the premises of the Nand Baba temple in Mathura (Uttar Pradesh) has been granted bail by the Allahabad High Court on Friday (18th December).

As averred by the Bail Applicant, the incident is of Thursday (29th October) while applicant was concluding his four day bicycle rally "Brij 84 Kosi Parikrama" aimed at spreading the message of inter-faith dialogue , love, empathy and religious tolerance.

A video recording of the said incident was recorded and uploaded on Facebook by one Goswami Shubham Kant Ji (associated with running the temple).

He also offered Namaz in the backyard of Nand Baba Mandir as a gesture of communal harmony as he wanted to spread the message of peace.

On the other hand, as per the FIR, allegation against him is that he, along with co-accused, Chand Mohammad performed Namaz inside the temple without consent of priest and its photographs were made it viral. The news was shown on the television.

Thereafter, a first information report was lodged on the allegation that this act of the applicant and co-accused shows disrespect for the religious feeling of other community and there is possibility of deterioration in the communal harmony.

It has also been suspected that the applicants are receiving foreign funds.

Bail application rejected by the Courts below

Thereafter, he approached ADJ-02, Mathura District Court. However, this application too, was rejected by the Court vide its order dated Tuesday (24th November)

Arguments put forth by the Applicant's Counsel

The counsel for the applicant submitted that applicant is a renowned social activist who has revived Khudai Khidmatgar movement of India and is working for maintaining communal harmony for the last 25 years.

In this connection, he undertook yatra for visiting temples and that he was offered prasad and lunch by Chief Priest of the temple and he also bestowed blessings on him as clear from photographs in dispute.

He further submitted that applicant was falsely implicated in this case.

He argued that only on the basis of photographs which went viral the applicant cannot be said to have intention to disturb the communal harmony of the society.

Further, he said that

"He did not enter into the sanctum sanctorum of the temple rather he performed Namaz outside of the temple with the permission of the priest of the temple as clear from the viral photographs. The allegation of receiving foreign funds is without basis."

Having considered the material on record, larger mandate of the Article 21 of the Constitution of India and the Apex Court's ruling in the case of Dataram Singh Vs. State of U.P. and another, reported in (2018) 3 SCC 22 and without expressing any opinion on the merits of the case, the Court directed,

"Let the applicant involved in the aforesaid crime be released on bail on his furnishing a personal bond and two sureties each in the like amount to the satisfaction of the court concerned."

Importantly, he has been asked to not use social media for any such purposes till the conclusion of trial.