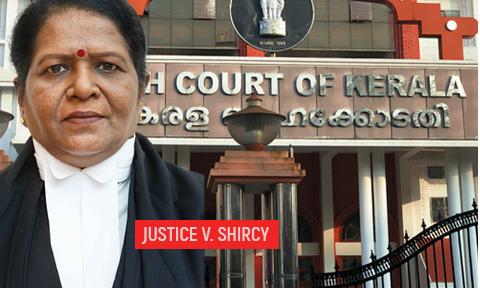 The Kerala High Court while denying pre-arrest bail to Sessy Xavier who practised in the State as an Advocate for over two years without enrolment, observed that she had not merely deceived the Bar Association or the general public, but the entire Judicial system.The Court also observed that it is advisable that Bar Associations verify with the Bar Council before admitting new...

The Kerala High Court while denying pre-arrest bail to Sessy Xavier who practised in the State as an Advocate for over two years without enrolment, observed that she had not merely deceived the Bar Association or the general public, but the entire Judicial system.

The Court also observed that it is advisable that Bar Associations verify with the Bar Council before admitting new members.

"The illegal activities adopted by her that too before the court of law has to be dealt with an iron hand. If leniency is taken, just considering the fact that she is a young lady, it will be a shame for the whole Judicial system and would shake the confidence of the public in the judicial system."

"More so the law applies to everyone equally. She has to surrender before the investigating officer forthwith or else she has to be arrested to proceed with the investigation of the case."

The Alappuzha Bar Association received an anonymous letter alleging that the petitioner, who is not a graduate in law and not enrolled as an Advocate before the Bar Council of Kerala, has been practising in the Courts in the District for the last two and a half years.

She had even contested in the election held by the Association and was elected as an office-bearer, as the librarian of the Bar Association.

It was then found that she had fraudulently approached the Bar Association with an enrolment number that belongs to an advocate practising in Thrivanathapuram and secured membership.

The Bar Association without delay decided in setting the law into motion by lodging a complaint.

Pursuant to the complaint forwarded by the Bar Association, the incident was registered by the North Police Station against the petitioner for having committed offences punishable under Sections 417, 419 and 420 of the Indian Penal Code.

Apprehending arrest in connection with the said crime, the petitioner approached the Court with an anticipatory bail application under Section 438 of the Code of Criminal Procedure.

Advocate Roy Chacko appearing for the petitioner put in black and white that she is not a law graduate.

He submitted that as she failed in some papers in the examination, and due to her poor financial circumstances at home, she could not successfully complete her LLB.

Thereafter, she joined as a law intern in the office of an Advocate at Alappuzha and attended courts regularly, but he submitted that it was without wearing the attire of an Advocate.

She contended that the petitioner without even completing her law graduation had committed cheating by impersonation by producing documents with the enrolment number of another Advocate, fraudulently obtained membership in the Association and thereafter started the profession of an Advocate as if she was enrolled before the Bar Council of Kerala.

According to the prosecution, she has deceived the District Judiciary, Advocates, as well as the entire public and therefore the offences alleged against her, are no doubt grave and serious in nature.

It was further submitted that the prosecution has to probe into the details so as to collect the entire materials to proceed with the investigation of the case with her in custody. As such, granting of pre-arrest bail was vigorously opposed by the learned public prosecutor

Advocate P.K. Vijayakumar was impleaded as the third respondent in the matter and was represented by Advocate B Pramod.

He also opposed the application with all vigour contending that the petitioner has tricked the entire legal fraternity by appearing before various courts with the enrolment number of another Advocate of Thiruvananthapuram.

It was further pointed out that she used to appear before the courts in the prescribed uniform of a lawyer and that the submission of the petitioner that she never used the white bands and Advocates' gown is absolutely incorrect.

The main question that falls for determination is whether the petitioner is entitled to get an order of pre-arrest bail in the case.

The petitioner is a young lady aged 27 years. It is an admitted fact that she has not even completed her course in LL.B, though she was a student at Law Academy Law College at Thiruvananthapuram for a short period.

The definite case of the petitioner is that she never appeared as an Advocate or attended the courts as an Advocate wearing the uniform prescribed for a  lawyer.

However, the Court noted that the materials on record as produced by the prosecution including news reports and photographs prove otherwise.

"Advocates are permitted to represent or even appear before a court of law only in uniform. Her case that she had only joined the office of a Senior Advocate as law intern appears to be a false statement as revealed from the records made available before this court."

The Bench thereafter referred to certain provisions of The Advocates Act, 1961.

Section 24 (1) (c) says that a person who has obtained a degree in law is qualified to be admitted as an Advocate if he/she fulfils the conditions narrated therein.

"Therefore, only a person holding a Law Degree is entitled to get his name enrolled in the roll as an Advocate and only after enrolment as an Advocate, one could practise the profession of law as an Advocate."

Similarly, going by the provisions contained in Sections 29 and 30, only the members of the Bar Association can contest an election. Nevertheless, the petitioner contested the election and was successful in her attempt.

The counsel for the petitioner had pointed out that she is a member of a poor family, out of her immaturity and lack of wisdom appeared in the courts and contested the election of the Bar Association as her nomination was accepted by the Association.

However, such arguments were not found to be justifiable reasons or grounds to exercise the discretion of the Court under Section 438 of the Code of Criminal Procedure in her favour.

The Bench noted that it was well settled that while considering an application for bail the court has to take into consideration the nature and gravity of the accusation levelled against the accused, the larger interest of the public, reasonable apprehension of tampering with the evidence, likelihood of absconding etc.

"In the instant case, prima facie, the petitioner has not only cheated the Bar Association, Alappuzha, the District judiciary of Alappuzha, the general public, but also the entire Judicial system."

The Bench also opined that there was no doubt that the gravity of the offences alleged against her was grave and serious in nature.

"Offences alleged are all the more grave as she committed fraud on the Courts and Judicial system."

It was further observed that the allegations levelled against her were highly serious and sensitive having grave repercussions in society.

"The illegal activities adopted by her that too before the court of law has to be dealt with an iron hand. If leniency is taken, just considering the fact that she is a young lady, it will be a shame for the whole Judicial system and would shake the confidence of the public in the judicial system."

To probe into the details of the matter, the Court found that custodial interrogation of the petitioner appears to be essential and inevitable. It was also noted that if she is granted bail, the possibility to abscond also cannot be ruled out.

The Bench added that it is always advisable that the Bar Associations before admitting a new member to cross-check and verify with the Bar Council so that such incidents can be prevented in future.

While dismissing the application, the Bench also noted that the lawyers' profession is considered to be one of the noblest professions and that misrepresenting as an Advocate before a client and obtaining her brief as if she is an Advocate, itself would amount to cheating the public.