Permanent Court of Arbitration Launches Book Titled 'International Arbitration and the Rule of Law' In Honour Of Fali S. Nariman 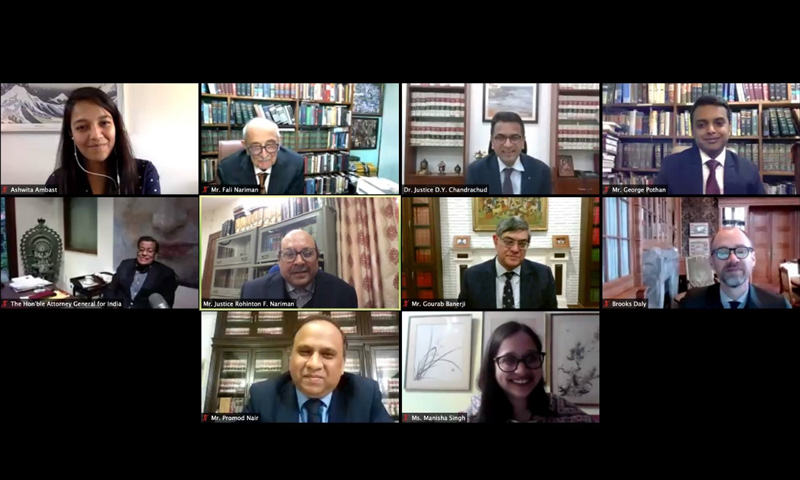 The Permanent Court of Arbitration (PCA) recently launched a festschrift titled 'International Arbitration and the Rule of Law', in the honour of Indian jurist, Mr. Fali S. Nariman. The Book, a collection of essays by judges, leading international law and arbitration practitioners and academics from various jurisdictions, was released in a virtual event organised by the PCA...

The Permanent Court of Arbitration (PCA) recently launched a festschrift titled 'International Arbitration and the Rule of Law', in the honour of Indian jurist, Mr. Fali S. Nariman.

The Book, a collection of essays by judges, leading international law and arbitration practitioners and academics from various jurisdictions, was released in a virtual event organised by the PCA on 23rd January 2021.

It was released by Supreme Court Judges, Justice Rohinton Nariman and Justice DY Chandrachud, Attorney General for India Mr. KK Venugopal, and the Deputy Secretary General of the PCA Mr. Brooks Daly in the presence of Mr. Fali Nariman. The session was moderated by Supreme Court Advocate Manisha Singh.

The book launch event also included a free-flowing discussion with the moderator, editors and the panellists:

Mr. Gourab Banerji began the session by giving a brief overview of the book's contents and the various authors and also spoke fondly about his interactions with Mr. Nariman.

Mr. Brooks Daly described the high pedestal that Mr. Nariman occupies in the international arbitration community. He narrated an incident from an investment treaty arbitration in which Mr. Nariman, as the Presiding Arbitrator deftly handled belligerent parties with great poise and tact.

The Attorney General spoke of his long-standing friendship with Mr. Nariman and his family. He described various instances where he had come across Mr. Nariman on the professional front and described Mr. Nariman's unique ability to paint a picture with words— terming it the 'Bombay Magic'.

Justice Chandrachud recalled meeting Mr. Nariman for the first time as a kid and spoke at length of Nariman's contributions in shaping Indian law as an ardent defender of constitutional liberties (making particular references to the ­Indian Express v. Union of India 1986 AIR 515 judgment and the Bijoe Emmanuel v. State of Kerala 1986 SCR (3) 518). He also highlighted the common-sense approach to commercial arbitration that Mr. Nariman espoused and concluded by declaring that Mr. Nariman truly is a 'living legend of the bar'.

Mr. Nariman began his speech by remarking that he envied the PCA for not only being older than him, but unlike him PCA is getting stronger with age - like good wine! He stated that he was touched by the 'preposterous' idea of having book of essays in his honour. He ended his speech by expressing his gratitude for everyone who had helped put together the event.

Ms. Ashwita Ambast, on behalf of the editorial team thanked all the contributors and briefly spoke about the book and the articles in the book.

Mr. George Pothan engaged in a discussion with Mr. Nariman on the lessons learnt and the way forward in investment treaty arbitration. Here, Mr. Nariman spoke of the need for a change in the way Investor Treaty Arbitrations are handled by India especially noting that systemic delays in the judiciary adversely affected India's position before Investment Treaty Arbitration tribunals.

Mr. George Pothan then asked Mr. Nariman if he could share with the audience regarding the various personal conversations they had about ways of improving investment treaty arbitration and bringing about more accountability among the arbitrators. To this Mr. Nariman said that it is important that each arbitrator in an investment treaty arbitration should give his reasons for the award and not just concur with the award as the hard task is reasoning the awards. He also said that there is a need to have a Permanent World Investment Court which would maintain records and bring more consistency and accountability to the process.

Mr. Promod, while delivering the closing remarks, spoke of the genesis of the idea of the festschrift, and remarked that Mr. Nariman is truly a national treasure.

Copies of the book may be ordered via the PCA's website (under the head "other publications")- https://pca-cpa.org/en/resources/publications/