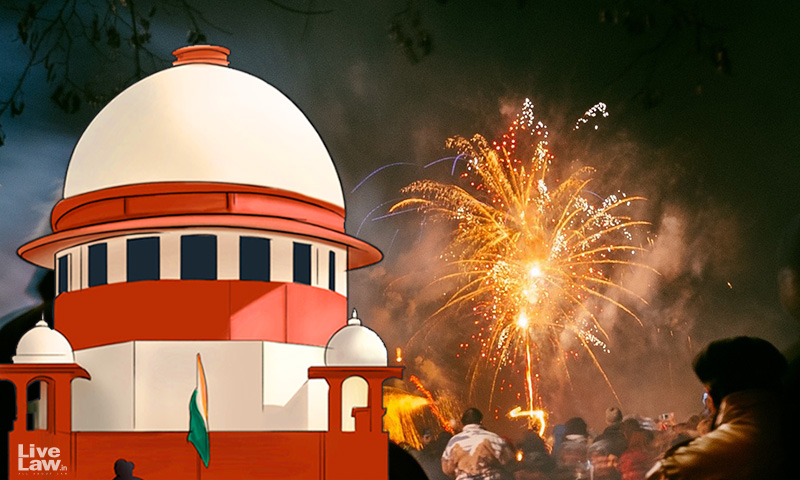 The Supreme Court on Wednesday observed that the CBI's preliminary enquiry against six firecracker manufacturers based in Tamil Nadu have revealed that they have been using barium and barium salts in the making of firecrackers in violation of the ban imposed by the Court on the use of such chemicals."Considering the report submitted by the CBI, it prima facie appears that the Court's...

The Supreme Court on Wednesday observed that the CBI's preliminary enquiry against six firecracker manufacturers based in Tamil Nadu have revealed that they have been using barium and barium salts in the making of firecrackers in violation of the ban imposed by the Court on the use of such chemicals.

"Considering the report submitted by the CBI, it prima facie appears that the Court's earlier orders on use of barium/barium salts as well as orders passed by the Court on labelling of fireworks have been violated", the Court recorded in its order.

The bench was hearing an application alleging violation of the order dated February 10, 2017 banning the use of certain chemicals that were dangerous & beyond safety limits in the fireworks by the manufacturers.

"The preliminary inquiry report of the CBI is serious. It is revealed that huge quantity of barium was purchased in last one year. If it is banned, how it was purchased? This is a very serious thing", Justice MR Shah, the presiding judge of the bench, orally said, after perusing the report submitted by Joint Director of CBI at Chennai.

On March 3, 2020, the Apex Court had issued directions to the Joint Director, CBI, Chennai, to make a detailed investigation report regarding the alleged violation of this Court's earlier orders by the respondent manufacturers by using the ingredients which have been banned and by mislabeling their products contrary to the directions of this Court as stated in the instant application and accordingly submit a report to the Court within a period of six weeks from the date of receipt of copy of the order.

Pursuant to a perusal of the preliminary inquiry report submitted by the CBI, the Bench noted that there had been a 'flagrant violation' of the Court's earlier orders by the manufacturing companies. It was found that the respondent manufacturers had used banned chemicals such as barium and barium salts while manufacturing the firecrackers.

The Bench noted that the preliminary inquiry report had been prepared on the basis of chemical analysis reports submitted by government laboratories and thus there was no need to doubt its veracity.

By an order dated October 23, 2018, the Apex Court had banned the use of barium salts in manufacturing firecrackers and had also advocated for the use of reduced emission firecrackers.

"Various samples of finished, semi-finished and raw material samples were collected from manufacturing factories which were sent for chemical analysis. It has been found that in many firecrackers barium and barium salts have been used by the manufacturers", the Bench observed.

The Court also observed with dismay that it has also been found that many of the respondent manufacturers had purchased huge quantities of barium and barium salts despite such chemicals being banned by the Court vide its earlier orders.

"It has also been found that labels of finished fireworks collected from the factories did not contain chemical composition of fireworks and date of manufacturing. This violates the Explosive Rules, 2008 and orders of the Court with respect to labelling of fireworks", the Bench observed further.

On Wednesday, the Bench also reiterated as to why FIRs and criminal proceedings must not be lodged against the manufactures on the basis of the CBI's preliminary report.

However, the Bench opined that 'one more opportunity' is being given to the respondent manufacturers to put forward their case. Accordingly, ASG Aishwarya Bhati appearing for Ministry of Environment, Forests and Climate Change was directed to serve a copy of the preliminary inquiry report of the CBI by tomorrow to all the concerned counsels of the respondent manufacturers as well as senior advocate Gopal Sankaranarayan appearing for the petitioner.

The Court also granted leave to the concerned manufactures against whom allegations had been made to file a counter-affidavit before the next date of hearing. The matter is slated to be heard next on October 6.