Fundamental Duties Yet To Be Enforced In Real Spirit; Govt Must Come Out With A System With Enforceability Of Citizens' Duties : Madras High Court 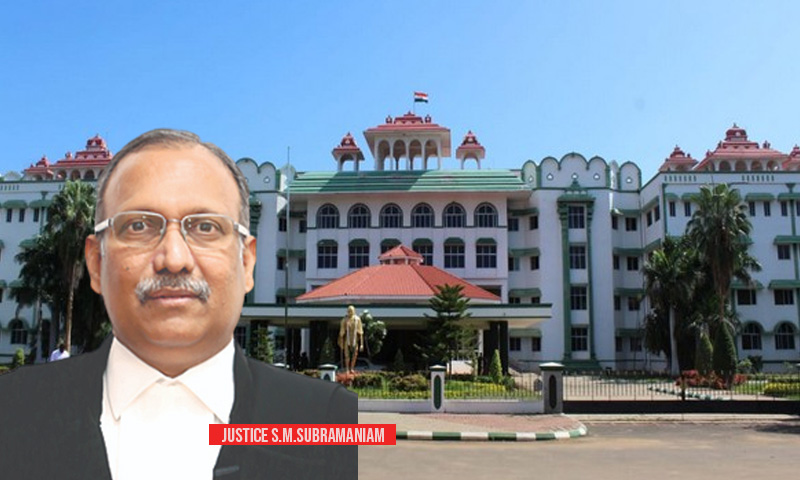 x
Government also should come out with a clear system with enforceability of duties and citizen in general also must be insisted for performance of their duties towards the public at large: Madras High Court

In a significant observation, the Madras High Court has recently said that it is time for the Constitutional Courts to ensure that the rights and duties are enforced in an equal manner. The Court also stressed that the Government should come out with a clear system with the enforceability of duties.This assertion came from the Bench of Justice S. M. Subramaniam as it held that if a public...

In a significant observation, the Madras High Court has recently said that it is time for the Constitutional Courts to ensure that the rights and duties are enforced in an equal manner. The Court also stressed that the Government should come out with a clear system with the enforceability of duties.

This assertion came from the Bench of Justice S. M. Subramaniam as it held that if a public servant contracted a second marriage during the lifetime of the first wife, then the second wife is not entitled to any service benefits, as the second marriage is void in the eye of law.

In its order, the Court also underscored that enforcement of duty is an integral part of the Constitution of India and that if performance of duties won't be insisted then an imbalance would be created and which would affect the democratic principles.

"A democracy can flourish only if rights and duties are equally balanced. The rights of the citizen are being protected, but the duties are yet to be enforced effectively...Rights and duties being corresponding, people cannot fight only for rights, but also to enforce the duties. There is much slackness in the performance of the duties in the Governmental Organizations. Therefore, a balancing approach in between the rights and duties are to be adopted by the Constitutional Courts so as to ensure that the democratic principles are protected in consonance with the constitutional philosophy and ethos," the Court observed.

"No right is absolute under the Indian Constitution. Every right, including the fundamental right, is subject to restrictions. Article51A of the Constitution of India contemplates fundamental duties, but it is yet to be enforced in it's real spirit. Thus, it is the time for the Constitutional Courts to ensure that the rights and duties are enforced in an equal manner. Large number of dereliction of duties and lapses are noticed on account of the non-enforceability of duties in a manner contemplated. Therefore, the Government also should come out with a clear system with enforceability of duties and citizen in general also must be insisted for performance of their duties towards the public at large".

It may be noted that recently, a PIL was filed in the Supreme Court seeking to enforce fundamental duties, in which the Court sought the assistance of the Attorney General for India.

Essentially, one M. Muthumadasamy retired from government service in August 2013 and he made a request before the Accountant General of Tamil Nadu to include the name of his second wife as a nominee in the service records for the purpose of family pension, however, when his request was rejected, he moved the High Court with his writ plea challenging the decision of the Accountant General of Tamil Nadu.

The impugned order of the Accountant General of the state averred that the writ petitioner had contracted second marriage when his wife is alive and thus, his second wife's name cannot be incorporated as a family pension beneficiary, as per the Tamil Nadu Pension Rules, 1978.

The Court also referred to Sub-Rule (2) to Rule 19, which stipulates that no Government servant involve himself in any act involving moral turpitude on his part including any unlawful act, which may cause embarrassment or which may bring discredit to Government

In this regard, the Court noted that the petitioner, who retired from service in August 2013, had married for the first time in the year 1985, and admittedly, he married for the second time in May 1994, when he was very much in service and therefore, the Court concluded, he had committed misconduct under the Conduct Rules.

Against this backdrop, the Court stressed that public servant is expected to maintain good conduct and utmost integrity both in-office and outside, and it further remarked thus:

"It is not as if a government servant has to maintain good conduct, only in the office during office hours. He is duty bound to maintain good conduct, even in the Society, outside the office and in all circumstances. Public servants are enjoying a special status in society. By virtue of the special status, then gain respect from the people. Therefore, the maintenance of integrity, good conduct, honesty and devotion of duty are the integral parts of the Conduct Rules and Tamil Nadu Civil Services (Discipline and Appeal) Rules, 1955, and also other related service rules."

Further, the Court also discarded the contention raised by the counsel for the petitioner who sought to argue that the petitioner had married for the second time after taking the consent of his first wife. In reply to this submission, the Court observed thus:

Significantly, underscoring that the Courts cannot encourage in cases where the public servants committed an act of misconduct and claiming benefits, the Court remarked thus:

"...in the event of considering such claims, the very purpose and object of the Conduct Rules are defeated and therefore, the Courts are bound to exercise restraint in such matters in granting relief in favor of the second wife merely on misplaced sympathy or considering any other factors which cannot play any role so as to compromise the good conduct, the devotion of duty, integrity to be maintained by the public servants."

In view of this, the Court held that the second marriage of the petitioner was a void marriage in the eye of law and therefore, his second wife won't be entitled to a family pension under the Pension Rules.

The Court also called it 'unfortunate' that suitable actions were not taken when the petitioner was in service, despite the fact that he contracted the second marriage, while he was in service.

Case title - M.Muthumadasamy v. The Accountant General and another