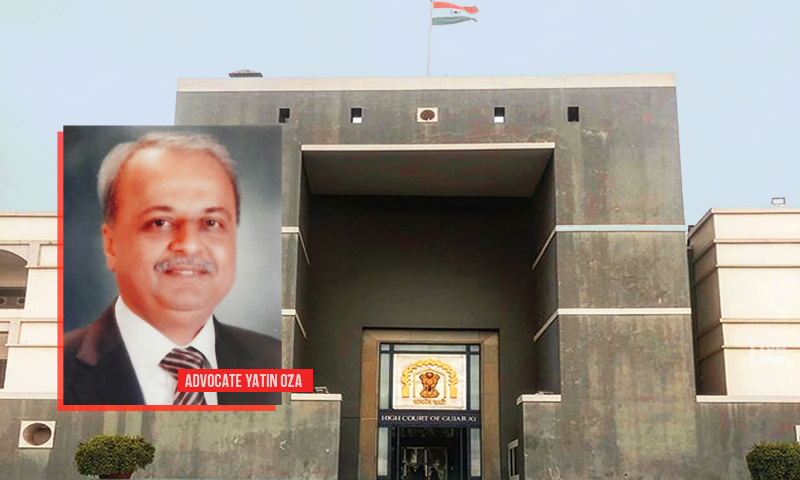 The Gujarat High Court on Tuesday issued criminal contempt notice against Senior Advocate and the President of the Gujarat High Court Advocates' Association, Yatin Oza, for making "scurrilous remarks" against High Court and its Registry, during a live press conference on Facebook. Taking suo moto cognizance of the incident, the bench comprised by Justice Sonia Gokani and Justice NV...

During his live conference on Facebook, attended by various journalists, Oza levelled the following allegations against the High Court and its Registry:

He highlighted that while some Advocates were struggling to get their matter listed since over a month, there were few others whose matters were being heard and were obtaining contemplated orders, in a jiffy.

He claimed to be in receipt of over 100 messages from advocates where matters filed several weeks and even months previously had not seen the light of the day.

Taking strong exception to such "irresponsible, sensational and intemperate" remarks, the bench observed that Oza had, with frivolous grounds and unverified facts, targeted the HC Registry and had questioned the very credibility of High Court Administration.

The High Court acknowledged that the system of virtual courts was not finding favour at some quarters and while the genuine grievances were being examined on administrative side by the High Court, the president of the Bar Association behaved in the most reckless manner.

"He leveled false and contemptuous allegations of corruption, malpractices against the administration of the High Court…which is working day and night against all odds, risking their lives and lives of their family members in present crisis and is also attempting to adopt to the new system of filing through emails in absence of availability of module of e filing and adjusting to remote hearing of cases," the court said.

Emphasizing on the productivity so far, the bench intimated that over 5,000 cases and over 3,000 Civil applications had been filed before the High, during the Lockdown period. Out of these, 8182 matters had been listed and 4057 were disposed of, where majority of them were of those who were having extremely meagre means.

In such circumstances the court remarked,

"Without caring for the truth, riding on the wave of populism, he appears to have crossed all limits by condemning recklessly the Institution. Being fully aware that his actions and above referred utterances are scandalous and capable of initiating proceedings of Contempt, he gave an open challenge to the authority of this Court in the very interview which is even worse than the very action."

The court said that the present is not the time where the Bench-and the Bar could afford to divert their energy in any kind of "bickering" and, in fact, both the branches were duty bound to work together and discharge their respective obligations in a "positive atmosphere".

The court further observed that Oza had indirectly raised fingers at some of the HC Judges, while claiming that few Advocates were being successful in getting their matters circulated in three courts and also getting contemplated orders.

Condemning such action on part of a Senior Advocate of the Bar the court said,

"The President in his complete consciousness and with total responsibility as declared by him in his interview called this August Institution a 'Gambling den' and an Institute which caters only to the litigants with means and money power, smugglers and those who are traitors. He also, for spreading sensationalism declared by his scandalous utterances that those who are not belonging to the Big industrial houses or construction Industry or having innumerable means, the High Court would kick them away. These scurrilous remarks appear to have been made without any substantive basis and without any intent to know the truth as also without approaching the Honourable the Chief Justice for any inquiry as the Head of the Institution."

The Court has thus put the matter before the Chief Justice for consideration at the hands of the full Court whether to divest Oza's stature under contempt, of designation of a senior Counsel.

In the passing, the bench also recalled that Oza had once faced contempt charges before the Supreme Court. Thereby, the Top Court had accepted Oza's unconditional apology while hoping that he will be incarnate with regret.

However, the bench remarked that it was pained to see that nothing had changed.

Oza has long been demanding normal functioning of courts, for the benefit of Advocates. A month ago, he had written to the High Court Chief Justice stating that there is "no logic" to restrict working of courts only to hear urgent matters.

Thereafter, following differences with the Office bearers of the Association regarding re-opening of the court, he had resigned from the office of President and had sought a fresh mandate on the issue as to "whether the court should function physical or virtual'. However, he withdrew the resignation after the GHCAA passed a resolution rejecting the letter of resignation.

He also recently addressed another letter to the CJ, asking him to call for the details from the Registry to confirm that four or five advocates have filed more than 40 to 70 matters during this lockdown and their matters have been placed not beyond three courts.