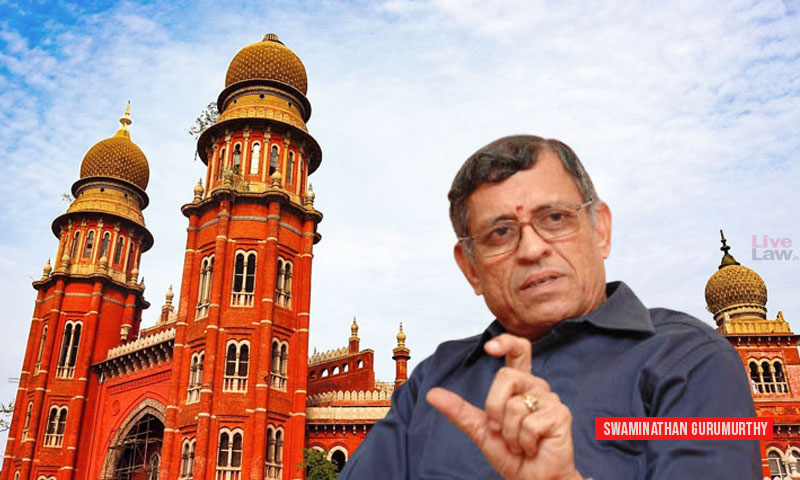 Advocate General of Tamil Nadu, Vijay Narayan, has issued notices on two applications filed before him seeking consent for initiation of contempt proceedings against Swaminathan Gurumurthy, the editor of the weekly 'Thuglak' magazine, for making scandalizing remarks against the judiciary. Gurumurthy has been asked to appear before the AG, either in person or through Counsel, on...

Advocate General of Tamil Nadu, Vijay Narayan, has issued notices on two applications filed before him seeking consent for initiation of contempt proceedings against Swaminathan Gurumurthy, the editor of the weekly 'Thuglak' magazine, for making scandalizing remarks against the judiciary.

Gurumurthy has been asked to appear before the AG, either in person or through Counsel, on February 16, 2021.

Notices have been issued on the applications filed by Advocates P. Pugalenthi and S. Doraisamy, alleging that Guruswamy's remarks have scandalized the Courts and lowered public confidence in the Judiciary.

During an annual event of the magazine on January 14, Gurumurthy had allegedly said that "most of the Judges are dishonest and meritless and obtained the post of the High Court Judge by falling in the legs of politicians".

Advocate P. Pugalenthi moved the High Court stating that a bare look at Gurumurthy's speech would reveal his intention to lower the esteem of the judiciary in the minds of the public.

"The respondent unhesitatingly says during his speech that many of the judges got their appointments by prostrating at the feet of the politicians and therefore they would be sympathetic to the corrupt politicians. Thus, the respondent has minced no words in announcing to the whole world that there would not be justice at the hands of the judges who were appointed by the politicians. The words used by the respondent would make the people lose faith in the judiciary and would ultimately result in destruction of rule of law," Pugalenthi said.

Reliance was placed on SK Sarkar v. Vinay Chandra Misra, AIR 1981 SC 723, where the Supreme Court held that the Court may, in its discretion, take suo moto cognizance of the matter on the basis of the information supplied to it in a contempt petition filed without consent of the AG.

Meanwhile, Advocate S. Doraisamy had written to Advocate General Vijay Narayan seeking his consent under Section 15(b) of the Contempt of Courts Act, 1971 for initiation of contempt.

In his letter, Doraisamy stated that the false, scandalizing and dishonest speech of Gurumurthy has undermined people's confidence in administration of justice and has brought the High Court into disrepute and disrespect, which amounts to criminal contempt.

He further went on to discard the allegations levelled by Gurumurthy as follows:

"According to the contemnor, most of the High Court Judges are meritless and were appointed as a judge by illegal method. It is a false and frivolous statement against the Judges. Almost all the judges of the Madras High Court are appointed considering their own merit only. Their names were chosen by the collegium of the Madras High Court and it is forwarded to the Supreme Court Collegium and then their names are forwarded to the Law Ministry. The Law Ministry forward the name to the Intelligent Bureau, then the Intelligent Bureau make a thorough investigation into the honesty and merits of each candidates and if in the report it is found that a candidate is not meritless, his name will be returned to the Supreme Court Collegiums."

"After the collegiums system had come in, the constitutional requirement of "in consultation with the Government has given a go buy" and the consultation is only a formal. Thus there is no chance for any politician to interfere with the appointment of the High Court Judges and only meritorious persons with the integrity are chosen as High Court Judges."

Significantly, Gurumurthy has already expressed regret and has clarified that his remarks were absolutely unintended, and were made in the course of an extempore reply to a provocative question.

This is not the first time that Gurumurthy is in news for making scandalous remarks. Two years ago, he faced contempt proceedings before the Delhi High Court for his tweets against Justice S Muralidhar. He was however let off after rendering an unconditional apology before a Division Bench.