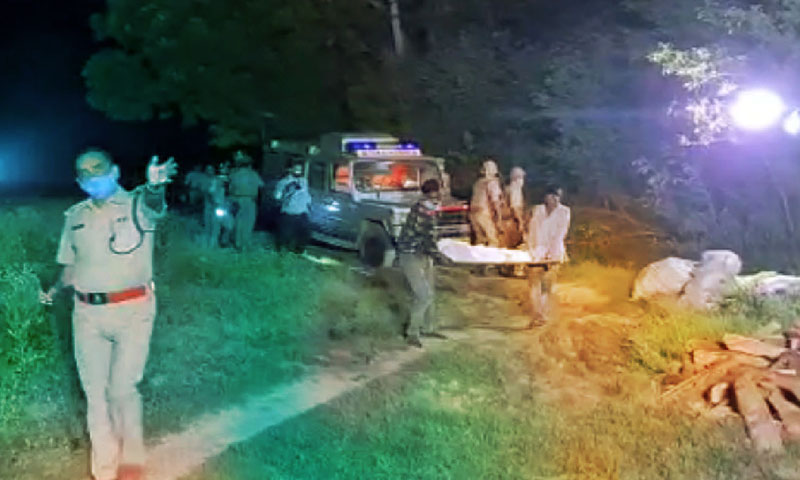 In Hathras rape and Murder case, Uttar Pradesh Government submitted before the Allahabad High Court that it has decided not to transfer the District Magistrate. Before the Bench of Justice Pankaj Mithal and Justice Rajan Roy, the Senior Counsel appearing for the State Government, S.V. Raju also attempted to justify the cremation of the victim in the night & he contended that...

In Hathras rape and Murder case, Uttar Pradesh Government submitted before the Allahabad High Court that it has decided not to transfer the District Magistrate.

Before the Bench of Justice Pankaj Mithal and Justice Rajan Roy, the Senior Counsel appearing for the State Government, S.V. Raju also attempted to justify the cremation of the victim in the night & he contended that the District Magistrate did not commit any wrong in this regard.

It may be noted that on the last hearing, the Bench had asked Senior Advocate Shri S. V. Raju as to whether it was fair and reasonable to allow the District Magistrate to continue at Hathras during pendency of the investigation as also these proceedings before it regarding illegal cremation etc. when he was in the thick of things?

Notably, dissatisfied with the reasons given by the UP administration for hasty cremation of the body the Dalit woman, the Allahabad High Court had on Tuesday (13th October) expressed its displeasure on the entire incident and deprecated the local authorities for violating the victim and her family's human and fundamental rights.

On the last hearing, the Allahabad High Court had called for a status report from the CBI on the status of its investigation into the Hathras gang-rape, also inquiring as to how much time would be required to complete the probe.

The Court directed that the same be put back in a sealed cover.

Further, the Counsel informed the Court that investigation by Central Bureau of Investigation (C.B.I.) "is expected to be completed by 10.12.2020."

To this, the Court directed the Counsel for the State to ascertain the facts in this regard and assist the Court accordingly on the next date.

Further, the Counsel for the Victim's Family placed before the Court, a letter of the District Magistrate dated 23.10.2020 wherein the statement of one of the family member of the victim allegedly made before this Court finds mention that the family did not want the compensation announced by the State Government and seeking its opinion in this regard, has been referred.

In response to this, she said that the family never declined to accept the compensation, but it was only in an emotional moment that one of the family members, who had been referred in the earlier order as 'BW' stated that "once we have lost the girl no amount of money can compensate her loss".

The Counsel told the Court that the Statement did not imply refusal to accept the compensation, yet such recitals have been made in the letter of the District Magistrate.

On the last hearing, the Bench had asked Senior Advocate Shri S. V. Raju - would it not be appropriate to shift him elsewhere during the pendency of these proceedings without there being any stigma attached to such action only to ensure fairness and transparency in the matter?

It may be noted that on Monday (02nd November) the Allahabad High Court had expressed its concern regarding the fact that Uttar Pradesh government was not taking any action against District Magistrate Pravin Kumar for fairness of the probe.

The state government had assured the court of a decision in this regard by November 25.

Now, on Wednesday (25th November), when the Court asked Advocate Raju, Senior Counsel appearing for the State as to what are his instructions with regard to continuance of the District Magistrate at Hathras, the Counsel submitted that after pondering over the issue Government has decided not to transfer the District Magistrate.

Stating reasons for the same he submitted before the Court:-

Firstly, that a political game is being played and the transfer of District Magistrate has been made a political issue by political parties with oblique motive so as to exert political pressure.

Secondly, he submitted that there is no question of the District Magistrate tampering with the evidence relevant to the investigation.

Thirdly, security of the family is now in the hands of the C.R.P.F. with which the State Government and its authorities have no concern.

Fourthly, the investigation itself is being conducted by the Central Bureau of Investigation and here also the State Government does not have any role.