HC Directs Govt. To Finalize a Location for Construction of Permanent Campus For NIT, Uttarakhand, Within Four Months[Read Judgment] 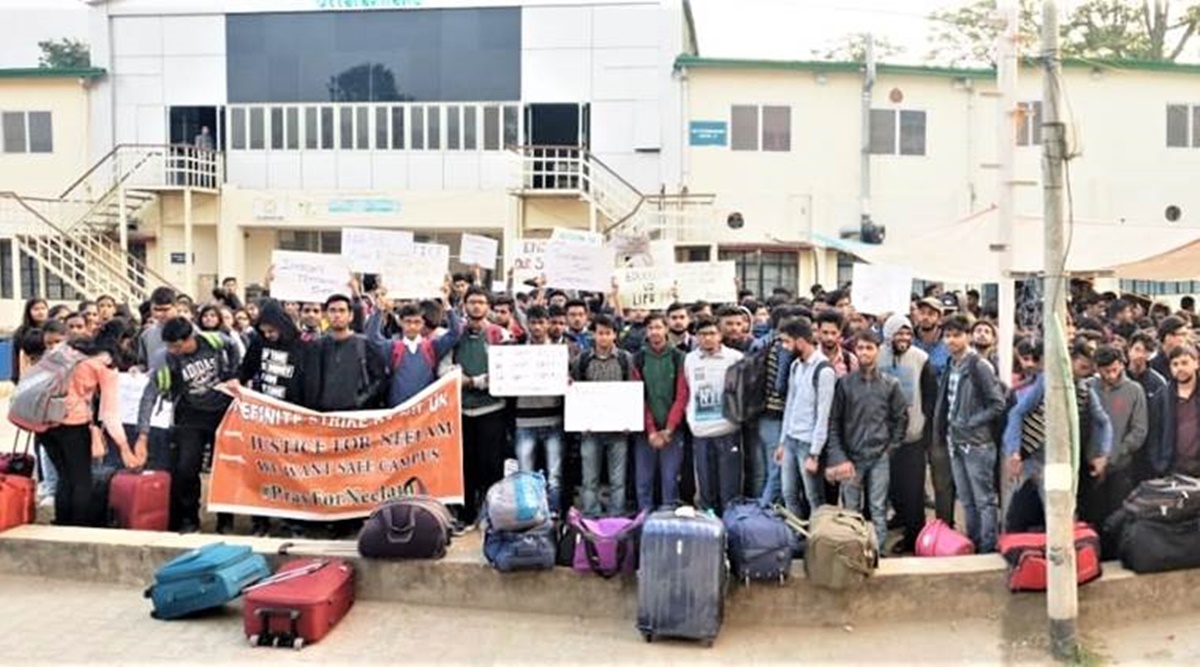 Resolving a decade long deadlock between the Central Government and the State Government, the Uttarakhand High Court on Monday issued directions for identification of a suitable location and construction of permanent campus of NIT, Uttarakhand.

The judgment, passed by a division bench led by Chief Justice Ramesh Ranganathan, who is set to retire today, comes as a big relief to the students of NIT, Uttarakhand, who have been the ultimate victims of "bureaucratic apathy" and "indifference".

The bench, also comprised of Justice Ramesh Chandra Khulbe has ordered the Central Government to seek expert opinion and finalize a location for construction of permanent campus of NIT, Uttarakhand, within four months.

In the meanwhile, it has been directed to consider the detailed project report submitted by team of architects and engineers of IIT Roorkee, regarding provision of infrastructural facilities at the temporary campus of NIT, Uttarakhand at Srinagar, and release the funds required for implementation thereof.

A piece of land that was allotted by the State of Uttarakhand in 2013 in Sumari region of the State for the NIT campus was later rejected by MHRD, Government of India in 2016, based on expert reports that the region was not fit to build a permanent campus for institutions of higher learning, as it was prone to landslides and earthquakes.

Despite high level letter exchanges between the Central and the State Government, the deadlock continued and even the temporary campus facilities for the students at Srinagar suffered. This led to filing of the present PIL in the year 2018, by an alumnus of NIT, Uttarakhand.

During the pendency of the writ petition, students studying at the temporary campus of NIT at Srinagar, in the first, second and third year of their B.Tech course, were shifted to the Jaipur Campus of the NIT in Rajasthan. Later, the Union of India decided on Sumari as the permanent campus of NIT, Uttarakhand, with a view "to end the impasse".

In its judgment, the division bench has examined the scope of its powers under Article 226 of the Constitution to interfere with the expert reports and policy decisions of the Government, vis-à-vis welfare of students.

"While it is not open to the High Court, in the exercise of its powers of judicial review, to substitute its views for that of the Central Government, the Court can, on being satisfied that the decision, to locate the permanent campus at Sumari, "only to end the impasse", is irrational and arbitrary, direct the Government of India to re-examine the matter from the safety angle, seek expert opinion in this regard, and then take a conscious decision on whether Sumari, as the location for the permanent campus of NIT, Uttarakhand, satisfies the minimum safety norms required to house the students and the faculty of NIT," the bench has held.

Ordinarily, the Courts refrain from interfering with the policy decisions taken by the Government. In the present case however, the division bench noted that the decision to build permanent campus in Samurai area was irrational inasmuch as the safety of students and faculty, for whose benefit the Institution is primarily established, had been completely ignored.

It noted that the geo-technical survey carried out by the Geological Survey of India did not indicate the safety of students and staff having been taken into consideration in making its recommendations that the land at Sumari is suitable.

While earlier the MHRD had informed the Chief Secretary Government of Uttarakhand that the land at Sumari was found unsuitable as it was prone to landslides; and the safety of students and staff would be a constraint concern, the GoI had suddenly agreed on the same location merely "to end the impasse."

In view of these circumstances the Court held,

"Decisions, even those falling within the realm of executive policy, cannot be taken in such a casual manner. Ending an impasse between the Centre and the State is no ground for the Government of India to agree for the permanent campus of the NIT, Uttarakhand to be located at Sumari. Such a decision smacks of irrationality, and suffers from manifest arbitrariness falling foul of Article 14 of the Constitution of India."

Need for Courts to defer to expert opinion

The bench was alive of the fact that findings of expert bodies, in technical and scientific matters, cannot ordinarily be interfered with by Courts in the exercise of their jurisdiction under Article 226 of the Constitution.

"Defer to the reports, of these expert bodies, we must," the bench remarked.

However, it proceeded to observe that deference does not mean that the plight of the students and the staff of NIT should be ignored by Courts, "for even policy decisions must not fall foul of the provisions of Part III of the Constitution," it held.

"If the decision taken, on the basis of the expert opinion, is ex-facie irrational, unreasonable and arbitrary, violating Article 14 of the Constitution of India, it is the obligation of Constitutional Courts to interfere, notwithstanding that it would, ordinarily, defer to expert opinion," the Court observed.

Exercise of discretion must also satisfy the test of reasonableness

The choice of location of the permanent campus falls within the discretion of the Executive, and do not ordinarily warrant judicial interference. However, this exercise of discretion must be directed properly in law.

The bench held that a person entrusted with a discretion must call his own attention to the matters which he is bound to consider and must exclude from his consideration matters which are irrelevant.

In the instant case, the Court held that the Government failed to consider the relevant matters viz. safety of students and staff and considered extraneous matters viz. ending an impasse.

"It is only if the Central Government had exercised its discretion taking into consideration relevant factors, and eschewing those which are irrelevant, would exercise of judicial restraint have been in order. The relevant fact, which the Central Government failed to take into consideration, was the safety of the students and the staff for whose benefit, primarily, the permanent campus of the NIT is established. The admission by the Central Government that the decision to locate the permanent campus at Sumari, is "only with a view to end the impasse", is an irrelevant factor which weighed with it in exercising its discretion to locate the permanent campus of the NIT, Uttarakhand at Sumari. Such exercise of discretion is not immune from judicial review within the narrow parameters of "illegality" and "irrationality"," the bench thus concluded.

It Is Not Necessary To Examine, Application Of The "Hard Look Doctrine"

The Petitioner had contended that the Government's decision to build the permanent NIT campus at Samurai should be examined by applying the "Hard-Look doctrine" which requires agencies to give detailed explanations for their decisions; justify departures from past practices; allow participation in the regulatory processes by a wide range of affected groups; and to consider reasonable alternatives, explaining why they were rejected.

However, having found the Government decision to be irrational and arbitrary, the Court held that there was no need to indulge into "newly propounded doctrines."

"In the light of what we have observed hereinabove, we hold that the decision of the Government of India, to locate the permanent campus of NIT, Uttarakhand at Sumari, "only with a view to end the impasse", is irrational, unreasonable, arbitrary and in violation of Article 14 of the Constitution of India, as it is a decision which is outrageous in its defiance of logic, and no reasonable person, who had applied his mind to the question to be decided, could have arrived at such a conclusion.

As we are satisfied that the decision of the respondents, to locate the permanent campus of NIT, Uttarakhand, at Sumari suffers from the vice of irrationality and unreasonableness, falling foul of Article 14 of the Constitution of India, it is unnecessary for us to take in aid the newly propounded doctrines," it was held.

Near fatal accident suffered by two students of NIT, Srinagar

Before parting, the Court expressed sympathy with two girl-students of NIT, Srinagar who were hit by an over-speeding vehicle while walking down the National Highway from their hostel, to attend the laboratory classes (as both these sites are not internally interconnected and the only mode of commutation is by travelling on the National Highway).

Unfortunately, one of the girls in the incident broke her backbone and the lower part of her body became completely paralyzed.

"The future of a young bright under-graduate student, of a reputed Institution like the NIT, has been completely destroyed as a result of the hit and run accident. The young girl continues to suffer the agony of a broken spine, and the lower part of her body being completely paralyzed. The dreams she would have had, of a bright future as an Engineer, lie completely shattered," the Court sympathized.

While the Court was of the opinion that the respondents cannot be held directly responsible for this hit and run accident, it observed that the accident could have been easily avoided if an internal pathway for students to commute from one segment of the campus to another was constructed.

The bench therefore directed the Central Government to provide necessary funds to NIT, Uttarakhand to enable the latter to reimburse the victim, the entire expenditure incurred by her for the continuous medical treatment of her spinal cord injury and associated paralysis of her lower limbs.

"The aforesaid benefit of reimbursement of medical expenses shall be extended by NIT, Uttarakhand throughout Ms. Neelam Meena's life time. In addition to the compensation of Rs. 25 lacs which has already been paid, both the Government of India and NIT, Uttarakhand shall pay Ms. Neelam Meena, in addition, another sum of Rs. 25.00 lacs as compensation for the trauma she is undergoing as a result of the near fatal injuries she has suffered," the bench added.