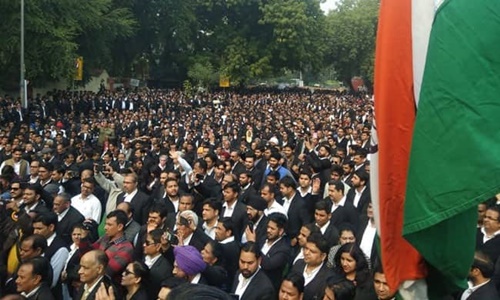 The Karnataka High Court by an order passed on June 4, dismissed a petition filed by 'The legal Attorneys & Barristers', seeking directions to the government to pass an Ordinance Bill, ensuring safety security to advocates and also protect advocates from arrest, detention and remand of police custody for the offence purported to be committed during the discharge of professional duty.

The petition which was decided by a division bench of Chief Justice Abhay Oka and Justice P S Dinesh Kumar had also sought a direction that mandatory sanction from the Secretary, Bar Council of India and Karnataka State Bar Council be obtained, prior to lodging of prosecution against any advocate.

Further, it sought that a Special court be constituted by Registrar General of the High Court, in case of an eventuality of prosecution against and advocate to try the case. The petition also sought directions to provide round the clock security to judicial officers, of trial and sessions court, so as to enable them to deliver free and fair justice.

The bench after going through the prayers in the petition noted that "The petitioner is seeking a writ of mandamus directing the legislature to legislate in a particular manner. The law on this aspect is very clear. In case of Union of India vs Prakash P Hinduja and other, the apex court has held that no court can direct a legislature to enact a particular law."

It added "As regards the litigants and members of the Bar, if any of them have any threat perception they can always apply to the police for grant of security. We are sure that if such applications are made the concerned authority will take action in accordance with law in the interest of administration of justice."