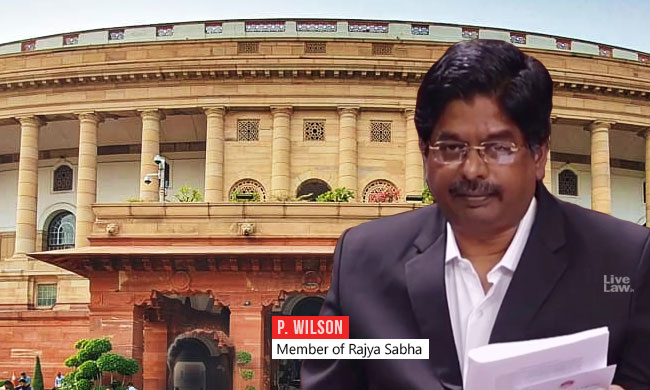 Senior Advocate and Rajya Sabha MP P Wilson on Tuesday raised the issue of mounting judicial vacancies in High Courts during a Zero Hour discussion.Talking about the pressing need to fill up high court judges' vacancies, the DMK MP from Tamil Nadu requested the Central government to finalize a Memorandum of Procedure for appointment of judges and to employ a mandatory time frame in the MoP...

Talking about the pressing need to fill up high court judges' vacancies, the DMK MP from Tamil Nadu requested the Central government to finalize a Memorandum of Procedure for appointment of judges and to employ a mandatory time frame in the MoP for each stage of the appointment process.

An "alarming emergency" prevails in the appointment of high court judges, he said. He pointed out that as 213 recommendations made by the Supreme Court Collegium were pending with the Centre, high courts continued to function in acute shortage of judges.

"Out of 1079 sanctioned posts of high court judges in 25 high courts, there are 401 vacancies. Nearly 1/3rd of sanctioned strength is allowed to lay vacant and the casualty is citizens of this country. The time has come for the Parliament to resolve the standoff between the Executive and the Judiciary in the deadlock in appointment of high court judges to various high courts within the time limit. Most high courts are functioning with only 50% of sanctioned strength. Shockingly, it has recently come to light that there are about 230 names recommended for appointment by the Collegium of the Supreme Court but the govt. is simply sitting over these recommendations without getting approval of the Hon'ble President for months for reasons best known to them. Such an inordinate delay in processing of the names recommended by the Supreme Court Collegium directly affects administration of justice which is a sovereign function," Wilson said.

Last year, a division bench of the Supreme Court comprising Justices Sanjay Kishan Kaul and K M Joseph had also expressed alarm over the increase in vacancies of High Court judges- nearly 40%. Later, the same bench ordered in December 2019 that the Government must appoint the recommendees approved by SC collegium within six months.

Wilson asserted that after the NJAC cases, the number of judges appointed to the high courts had been "steadily decreasing".

He said that this decline in the appointment of judges was at the behest of the central government which did not forward the Collegium recommendations and instead, unreasonably sat over those recommendations.

Likewise, the recommendations sent by Supreme Court Collegium are not sent for approval and processed by the Central government for president approval." he said.

He asserted that this situation does not align with the national interest and if it continues, the functioning of the high courts throughout the country will be "crippled".

Thus he urged the Prime Minister, the Union Law Minister and the Cabinet Ministers to take a decision on the 230 recommendations cleared by the Supreme Court Collegium within a reasonable time period, and to ensure that the processing of such recommendations in the future course happens within a clear mandatory time frame.

"Access to justice is an inalienable fundamental right of citizens. This right is defeated if the higher judiciary is crippled due to vacancies. People shouldn't lose faith in judiciary and adopt extra constitutional methods due to delay in disposal of cases," he remarked.

In October, 2015, Justices J S Khehar, MB Lokur, Kurian Joseph and Adarsh Kumar Goel had declared the 99th Amendment and NJAC Act unconstitutional, by 4:1 majority. However, the Court admitted that there was a need to improve the Memorandum of Procedure for appointment of judges to bring in more transparency and efficiency.

This MoP is expected to entail a fixed timeline for appointment of judges at each stage, starting from recommendation made by the high court Collegium, through recommendation of the Supreme Court up till, approval of the President.

In its absence the Centre, which was not receptive of the Supreme Court's decision, has time and again been accused of delaying the process by simply sitting over the recommendations.

In the latest, the controversy related to elevation of Justice Akil Kureshi as a Chief Justice of the high court did rounds. It was alleged that the Central Government had been purposely blocking his elevation due to extraneous considerations.

During his speech, Wilson had also pointed out that as the retirement and elevation of judges continue, the existing gap only widens.

Notably, retirement and elevation of judges shouldn't be a problem since by convention recommendations for prospective vacancies are to be sent six months in advance so that there is enough time for processing the names from the recommendation stage till appointment.

However, since the government does not forward the names in time, the entire exercise becomes futile. In this regard, the Supreme Court had last year remarked,

"sending names six months in advance would be meaningful only if the process till appointment is complete within six months which is a work the Government must attend to."

Read an account of the dealings in finalization of the MoP here:

4 Years Of NJAC Judgment : Where Is The MoP For Judges Appointment?