Hindus Professing 'Sanatana Dharma' Not A Religious Denomination As Such For The Purposes Of Article 26 : Uttarakhand HC [Read Judgment] 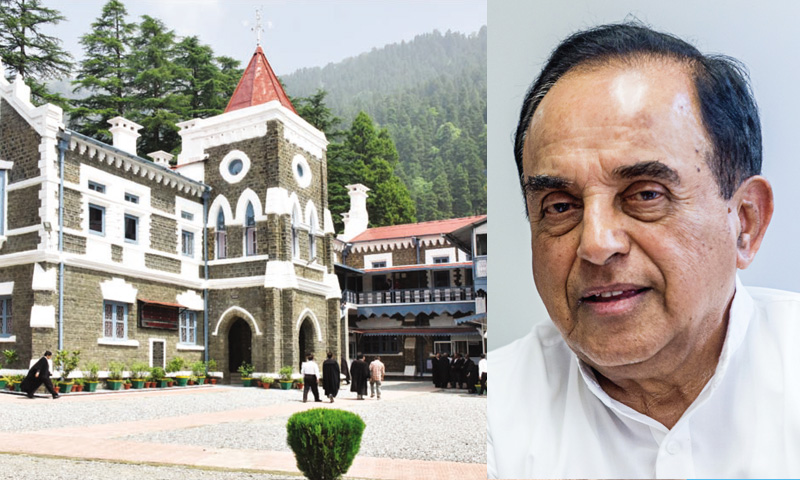 x
"Hindus as such are not a denomination/section/sect; nor as Hindus, professing and having faith in Sanatana Dharma, one such."
Your free access to Live Law has expired
To read the article, get a premium account.

The Uttarakhand High Court in its judgment which turned down a challenge against Constitutional validity of the Uttarakhand Char Dham Devasthanam Management Act,2019, has made a detailed exposition of Article 26 of the Constitution of India.

The bench comprising of the Chief Justice Ramesh Ranganathan and Justice R.C. Khulbe today dismissed a PIL filed by BJP leader Dr. Subramaniam Swamy challenging the constitutional validity of  Act. The Court, however, read down Section 22 of the Act.

Article 26 of the Constitution confers freedom to manage religious affairs and, thereunder, subject to public order, morality and health. It provides that every religious denomination or any section thereof shall have the right :-

(a) to establish and maintain institutions for religious and charitable purposes;

(b) to manage its own affairs in matters of religion;

(c) to own and acquire movable and immovable property; and

(d) to administer such property in accordance with law.

The State contended that Hindus professing Sanatana Dharma cannot be called a religious denomination; the mere fact that the temple is a Hindu temple would not bring it within the ambit of Article 26 of the Constitution. "Hindu Dharma" and "Sanatana Dharma" are synonyms, submitted the State.

According to it, to complain of violation of their fundamental right under Article 26, the following conditions must be satisfied:

(i) the person claiming the right under Article 26 must be a religious denomination or a section thereof;

(ii) the said religious denomination should have established the religious institution of which it claims a right to maintain;

(iii) the said denomination must be managing its own affairs with respect to religion;

(iv) such management must be by a denomination, and not by an individual;

(v) only then would the said denomination have the right to acquire moveable and immovable properties;

(vi) the right of the religious denomination to administer its property can be regulated by law;

(viii) these facts must be specifically pleaded in the Writ Petition; and in the absence of any such plea, no contention regarding violation of Article 26 can be examined.

The court, referring to various Supreme Court judgments in this regard, concluded that, while any sect or sub-sect, professing certain religious cult having a common faith and common spiritual organisation, may be termed a religious denomination, no caste, sub-caste or sect of the Hindu religion, who worship mainly a particular deity or god, can be termed as such. It said:

Believers of a particular religion are to be distinguished from denominational worshippers. Thus, Hindu believers, in general, including those of the Shaivite and Vaishnavite form of worship, are not denominational worshippers, but form part of the general Hindu religious form of worship. (Indian Young Lawyers Association[55]). As the believers of the Shaiva form (or the Vaishnavite form) of worship are not a denominational sect or a section thereof, but are Hindus as such, they are entitled to the protection under Articles 25 and 26 of the Constitution, but not to the protection, in particular of Clauses (b) and (d) of Article 26, as a religious denomination in the matter of management, administration and governance of the temples under the Act. (Sri Adi Visheshwara [5]). We find no merit, therefore, in the submission that Hindus, professing and having faith in Sanatana Dharma, constitute a religious denomination, or that the definition clauses in the 2019 Act (where this terms finds place) is a legislative acknowledgement that they constitute a religious denomination. (Para 87)

While any sect or sub-sect, professing certain religious cult having a common faith and common spiritual organisation, may be termed a religious denomination, no caste, sub-caste or sect of the Hindu religion, who worship mainly a particular deity or god, can be termed as such. Hindus as such are not a denomination/section/sect; nor as Hindus, professing and having faith in Sanatana Dharma, one such. (Para 89)

The Court also explains the concept of 'Hinduism' and 'Sanathana Dharma' in its judgment. It further observed:

Even if this contention, that these Chaar Dhaam Temples are being managed by a religious denomination of Hindus, professing and having faith in Sanatana Dharma, is presumed to have some force, a bare reading of Sections 3(1) and (2) of the Act would show that it is only persons, who follow Hindu Religion, (which is defined in Section 2(l) to mean such sect of Hindus professing Santhana Dharma or having faith in it), who can be nominated as the Chairman and members of the Board, to manage the secular affairs of the Chaar Dhaams and other temples referred to in the 2019 Act. (Para 90)

The Court also made the following observations regarding the scope of Article 26.