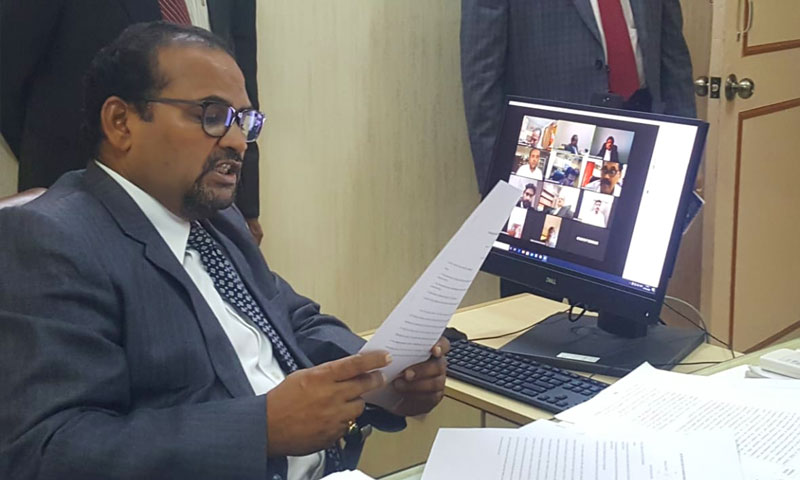 So far as disposal of extremely urgent cases in the High Court is concerned, the High Court has taken a decision to dispose the cases only through Web-hearing, i.e. through Video-Conferencing in view of the need so occurred. The Chief Justice and the Registry have planned for the hearing of cases by using ZOOM MEETING APPLICATION, which is an open-source software.

High Court has decided to install the software in the desktop/i-pad/mobile of the Hon'ble Judges. The learned Advocate General, Public Prosecutor, Asst. Solicitor General and other learned Advocates have been requested to download the said APPLICATION in their respective devices.

Advocates and parties who appear in person before the High Court have been requested to submit the soft copies of their cases to the Registrar (Judicial) to his official e-mail.

Prior to the meeting, the Registry will log into the APPLICATION from the official residence of the Chief Justice and invite the companion Judge, learned Advocate General, Asst. Solicitor General, Public Prosecutor and respective counsel who will be sitting in their respective houses, to the VC, by sharing the meeting ID and password to their mobiles.

Learned Advocate General, learned Asst. Solicitor General, learned Govt. Pleaders of different Department, learned public Prosecutor, Advocates, who are appearing for their clients in the respective cases would be sitting at their respective houses in order to participate in the Video-Conferencing.

The cases are being taken up as per the cause list and the counsel concerned will be advancing arguments from their end and the Chief Justice and the companion Judge will be hearing the cases through Video-Conferencing.

Through this mode, the Chief Justice, the companion Judge and the respective counsel are able to participate in the web hearing through Video Conferencing by sitting at their respective residences, duly complying with the lock-down advisory issued by the Govt. of India as well as the State Government, which is a unique feature.

The orders are immediately uploaded in the official website of the High Court.