The Kerala High Court on Friday stayed the order of the National Company Law Tribunal (NCLT) Kochi bench which held that the March 24 notification raising the threshold limit for insolvency proceedings as Rupees One Crore will apply only prospectively.In the case M/s Tharakan Web Innovations Pvt Ltd vs Cyriac Njavally, the NCLT held that the March 24 Notification which enhanced the...

The Kerala High Court on Friday stayed the order of the National Company Law Tribunal (NCLT) Kochi bench which held that the March 24 notification raising the threshold limit for insolvency proceedings as Rupees One Crore will apply only prospectively.

In the case M/s Tharakan Web Innovations Pvt Ltd vs Cyriac Njavally, the NCLT held that the March 24 Notification which enhanced the minimum threshold for insolvency proceedings in the wake of COVID-19 pandemic does not save a Corporate Debtor when the default has taken place before the pandemic.

After hearing the submissions of Senior Advocate Joseph Kodianthara,  a single bench of Justice PV Asha issued notice on the petition and stayed the insolvency proceedings against the petitioner in the NCLT.

The insolvency proceedings were initiated by Cyriac Njavally with respect to an alleged default of Rs 31 lakhs.  The corporate debtor filed an application before the NCLT objecting to the maintainability of the proceedings in view of the March 24 notification. It was contended that the application stated to have been filed on March 7 was incomplete and that it was actually filed only on September 25. The date of proper filing should be regarded as the 'initiation date' for the the insolvency proceedings.

However, the NCLT rejected the objection by holding that the March 24 notification will not affect proceedings if the cause of action has arisen before the said date.

"On a perusal of the documents placed on record, it is seen that the Notification dated 24.03.2020 does not save the Applicant/ Corporate Debtor from the initiation of insolvency especially in cases where defaults towards creditors have taken place before the pandemic and the resultant financial crisis. Such an interpretation would be contrary to the intention of the executive in exercise of its power of delegated legislation.

If the intention was to provide for a blanket protection to Corporate Debtors from being dragged to the NCLT irrespective of when or what extent a default has taken place, it would necessarily require a legislative amendment, and that a mere issuance of the notification would not suffice.", the NCLT stated.

The Tribunal relied on the order passed by the National Company Law Appellate Tribunal on October 12 in the case Madhusudhan Tantia VS. Amit Choraria and Anr which held that the March 24 notification has no retrospective effect.

"Suffice it for this Tribunal to point out that from the tenor, spirit and the plain words employed in the notification dated 24.03.2020 of the Ministry of Corporate Affairs, Government of India, one cannot infer an intention to make or make it retrospective...", the NCLAT had held.

"In the instant application filed under Section 9 of IBC, the debt has become due on 06.07.2019. That on 25.02.2020, the Demand Notice in Form 3 under Rule 5 of the Insolvency and Bankruptcy Code, 2016 demanding payment of Rs. 31,33,595/- (Rupees Thirty-One Lakhs Thirty-Three Thousand Five Hundred and Ninety-Five Only) was sent to the Corporate Debtor at its Registered Office through speed post. However, no reply raising any dispute has been received by the Respondent/Operational Creditor within the stipulated period of ten days from 25.02.2020."

Read the stay order passed by the High Court : 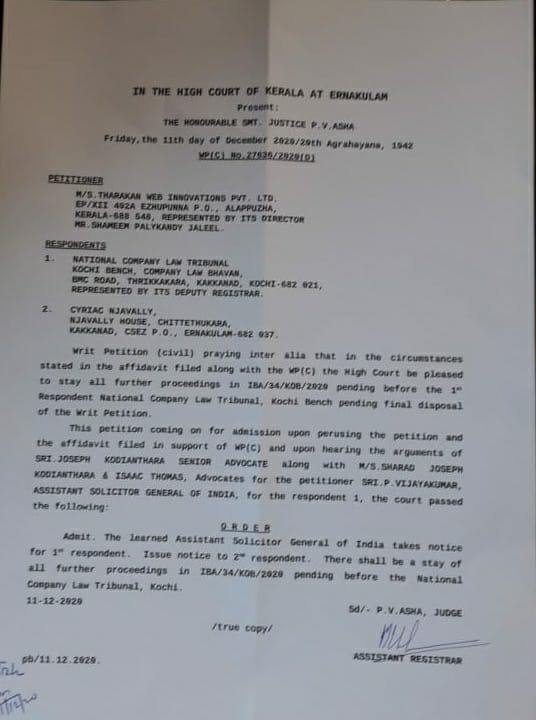