In Democracy, If Atrocity Committed By Police Against An Advocate, What Would Be Fate Of General Citizen: Asks AP HC [Read Order] 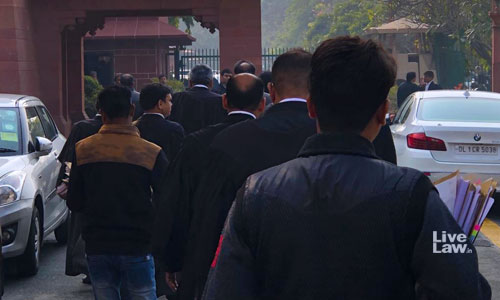 "In a democratic state, if such an atrocity is committed by a government functionary against an advocate, who is an officer of the court, it is difficult to perceive the fate of the general citizen", observed the Andhra Pradesh High Court on Monday.

The bench of Justices Rakesh Kumar and K Suresh Reddy was hearing a habeas corpus plea against the illegal detention of an advocate by the police.

The division bench expressed that it is "really shocking" that the "wife of an advocate" has approached this court for "issuance of habeas corpus" for her husband.

The Court took note of the "serious allegation" that in the mid night at 1 AM, her advocate husband namely Pyla Subhas Chandra Bose, while sleeping in his house with all the family members, was taken away by police officials, who had forcibly entered into the house without following any norms.

"It has been alleged that on being asked, the only answer given by the police is that the reason will be informed in the police station", the bench expressed its consternation.

The Court recorded that there is even no information with the petitioner as to where her husband has been confined.

"It has been indicated that her husband was regularly being threatened by one Sub-Inspector of Police against whom a complaint was made to the National Human Rights Commission on 14th July", reads the order. The Court further noted that it has been alleged that this occurrence has taken place on account of "some political reason".

In such a situation, the Court felt "constrained" to direct the concerned Superintendent of Police to produce the husband of the petitioner physically in the court.

The bench also required the police to file an explanation as to under what circumstances, without following any norms and contrary to statutory provisions, in the night at 1 AM police officials intruded inside the dwelling house of the petitioner's family without any authorisation.

The court took judicial note of the fact that on an earlier occasion, in a case of such illegal detention, the Director General of Police himself was summoned by this court and he had given assurance regarding non-repetition of such type of incidents.