Can One Inflict So Much Cruelty On Minor Girl To Pacify One's Lustful Hunger?: UP Court Awards Death Sentence In Minor's Rape-Murder Case 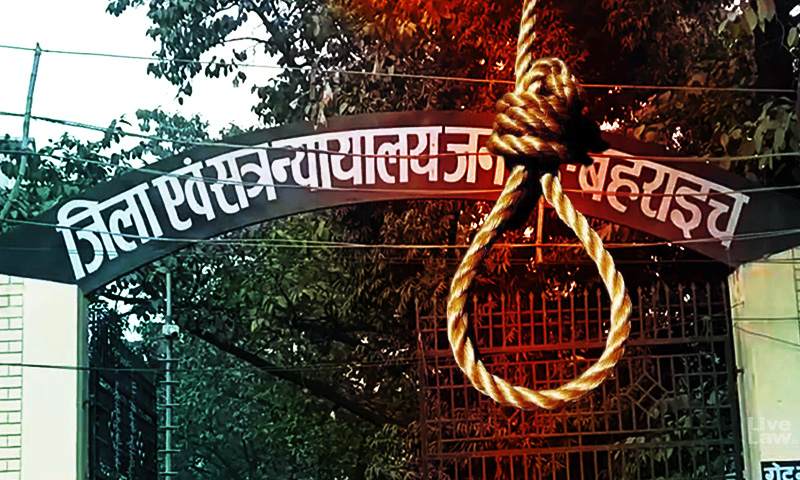 An Uttar Pradesh Court (Bahraich District Court) earlier this month awarded the Death Penalty to a tractor driver (Phoolchand) in connection with the rape and brutal murder of a 14-year-old girl as the Court wondered -can a man inflict so much cruelty on a minor girl just to pacify his lustful hunger? Finding that the case fell in the rarest of rare category, the Additional...

An Uttar Pradesh Court (Bahraich District Court) earlier this month awarded the Death Penalty to a tractor driver (Phoolchand) in connection with the rape and brutal murder of a 14-year-old girl as the Court wondered -can a man inflict so much cruelty on a minor girl just to pacify his lustful hunger?

Finding that the case fell in the rarest of rare category, the Additional District and Session Judge/Rape and POCSO Court Judge, Nitin Pandey also imposed a fine of Rs 40,000 on the main accused in the 122-page judgment.

The court also awarded 20-year rigorous imprisonment to the co-accused (Roshan Lal) in the case for Kidnapping and raping the minor, however, the Court acquitted him of the murder charge after he was found not to be involved in the killing of the minor.

"Phoolchand inflicted almost fourteen injuries to Aparajita (Changed name) during the crime. While assaulting Aparajita, she tore her vagina. Her private parts were found besmeared with blood. Social harmony is adversely affected by such incidents and such incidents shake-up the society. Neighbors also stop trusting their counterparts. Children and women start looking at men with suspicion," the Court observed while finding Phoolchand, a tractor driver who worked as a daily wage laborer at the girl's house.

The Court found him guilty of charges of kidnapping, rape, murder under IPC and under the provisions of the POCSO Act.

As per the prosecution's case, in April this year, the 13-year-old victim went to her father's shop in the evening to bring some goods but did not return. Following this, her family and neighbors started looking for her and finally found her dead body in a nearby nullah.

The villager saw two local residents (Convicts/Phoolchand and Roshan Lal) running away from the spot and so they alerted the police. The police reached the site and took possession of the body and found other materials belonging to the convicts.

In the autopsy report, it came on record that she was raped and strangulation of the girl too had taken place.

The Court noted that Phoolchand (Convict) was working at the victim's family as a tractor driver and must have been a trustworthy person, still, the Court added, he betrayed her by raping her.

The Court also said that the victim was less than fifteen years old, and therefore, she was not able to resist much and because of her faith in the convict, and that she could not anticipate as to what he was going to do with her?

The Court further took into account the injuries on Victim's body, as it opined that the injuries on her private parts and the discovery of her dead body in a completely naked state go on to prove that with what brutality the crime had been committed by him.

Wondering as to what her father would have felt and will continue to feel for the rest of his life when he first saw the dead body of her daughter in a naked state, the Court observed thus:

"…it is expected from the society, the government, and the judiciary that the person who executes such a heinous crime should be given the harshest punishment…it is clear from the above discussion that the Convict will affect the society due to the crime committed by Phoolchand."

Further, the Court also noted in its 122-page judgment that it had come on record that the Victim's genitals and the inner side of her private parts were torn and that the motive behind the crime was that the Convict wanted to fulfill his sexual desires.

"Aparajita was abducted and brutally raped. After this, she was strangled to death by this man. About fourteen injuries were found on Aparajita's body. She was found in a naked dead state soon after the incident. Phoolchand had the knowledge of Aparajita's age and knew that she was a minor and whose body would not have developed for sexual intercourse," the Court observed as it awarded the death penalty to him.

In accordance with the principle established in the cases of Bachan Singh, Machi Singh, and Mukesh & Anr vs State For Nct Of Delhi & Ors (Nirbhaya Case), the Court, in the instant case, did a comparative analysis of the Mitigating and Aggravating circumstances.

In the present case, the Court observed, there are no such mitigating circumstances that can bring the conduct of the Convict out of the purview of the rarest of the rare case category.

"The crime committed by the convict continuously and the effect it has had on the victim and the society, brings the crime committed by the conviction in the purview of rarest of rare...In this case, Aparajita was brutally raped and murdered by Phoolchand. A minor girl was killed by this Phoolchand before she could enjoy the pleasure of this earth. Phoolchand also deprived a mother and father of their daughter's love/affection and by his act, he made such an adverse effect on the society and the victim side which will never be removed from their mind," the Court added.

With this, the Court found him guilty for all the offences charged and awarded him the death penalty by observing thus:

"Convict Phoolchand Kanaujiya be hanged by neck till he is dead"

Court's order as to the guilt of accused

Having considered the circumstantial evidence, medical evidence, witness' testimony, the Court found that it was proved beyond doubt by the prosecution that the accused Phoolchand had kidnapped the victim, who was a minor girl and had raped while committing a penetrative sexual assault upon her.

"Thereafter, she was injured to such an extent that Aparajita would be in danger of being murdered, and in reality also, she was strangled to death by this accused to cover up her crime," the Court noted while noting the guilt of the Accused.

As far as co-accused, Roshan Lal is concerned, the Court said it was not proved that he himself caused the rape and murder of Aparajita.

During the appreciation of the evidence, it was found by the Court that his intention was only to rape Aparajita in pursuance of the conspiracy and his intention of killing Aparajita was not proved. However, he was found guilty of abetment of rape.

Last week, the same Court had awarded Death Penalty to a person after finding him guilty for raping his own 14-year-old daughter for two consecutive years, after noting that the act was contrary to all the norms established by law, religion, and humanity and is going to destroy the institution of the family.