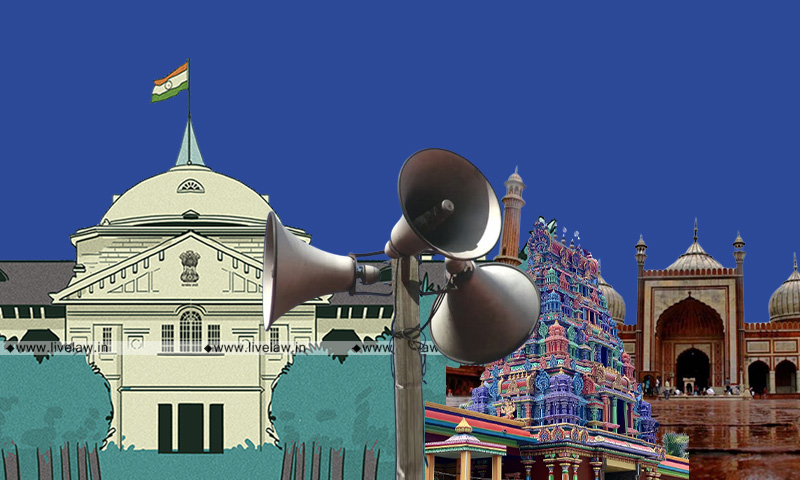 The Allahabad High Court recently deprecated the conduct of an advocate who tried to influence the Court by using such language so as to invoke religious sentiments. The Bench of Justice Saral Srivastava further remarked that such conduct is not good for the temple of justice.

Essentially, the Court was dealing with a contempt plea filed by one Jahur Hasan who alleged non-compliance and violation of the order of the High Court dated September 9, 2013, in Writ-C No.48093 of 2013.

In that order, the Court had directed the State Government to frame policy with respect to the use of amplifiers in Temples and Mosques, however, the instant contempt plea alleged that no such policy had been framed by the state.

At the outset, the Court noted that the said matter [Writ-C No.48093 of 2013] is pending consideration before the High Court and further opined that the order dated September 9, 2013, was interim in nature and the matter is yet to be adjudicated by the Writ Court and outcome of the decision of the Writ Court is still awaited.

In this view of the matter, the Court observed this is not a stage at which the contempt application should be filed and since the matter is still pending, therefore, no contempt was made out.

Even otherwise, the Court added, the pleading of the contempt application does not disclose that any case for contempt is made out.

Further, the Court disapproved of the conduct of the lawyer who cast aspersions upon the Court that he was not being heard by the Court.

Significantly, the Court, in its order, noted that the Counsel made a remark in the Court that State Government was acting arbitrarily as under the garb of the order passed by the High Court and it was removing only illegal mosque and not removing temples.

"This Court finds the said argument unacceptable as a lawyer is expected to argue within the framework of law and this kind of argument should not be placed before the Court. It is also expected that counsel for the applicant should come prepared in the case and at least come with minimum essential book which is relating to the case i.e. bare act of the case. The Court has consistently requested the counsel for the applicant to demonstrate from the pleading as to how the case of contempt is made out but instead he has cast aspersion upon the Court that he is not being heard despite the fact that the Court has heard him for about half an hour," the Court remarked.

Further, taking excepting to his act to cast aspersions upon the Court, the Court said that this kind of practice will erode the faith of the public in the judicial system of the country and the same will be detrimental to the democratic setup as well as harmony among the communities living in the country with love and dignity.

In related news, the Court recently dismissed a contempt plea filed against the State Government for its failure to confine the use of loudspeakers in Temples and Mosques within the permissible limit of decibels across the State.

Read more about the case here: "Charges Not Specific": Allahabad HC Dismisses Contempt Plea Over Use Of Loudspeakers In Temples, Mosques Across UP

In February 2022, the Allahabad High Court had dismissed a contempt plea filed regarding the usage of loudspeakers in the Temple as well as Mosque and observed that the same was a sponsored litigation so as to affect the communal harmony of the State keeping in mind the State Elections.

On May 4, 2022, the Allahabad High Court observed that the law has now been settled that the use of loudspeakers from mosques is not a fundamental right. The Bench of Justice Vivek Kumar Birla and Justice Vikas Budhwar said this while dealing with a writ plea filed by one Irfan.

Essentially, Irfan had moved to the High Court feeling aggrieved by an order passed by SDM Tehsil Bisauli, District Budaun rejecting his application seeking permission for playing loudspeaker/mike in a village Mosque at the time of azan.