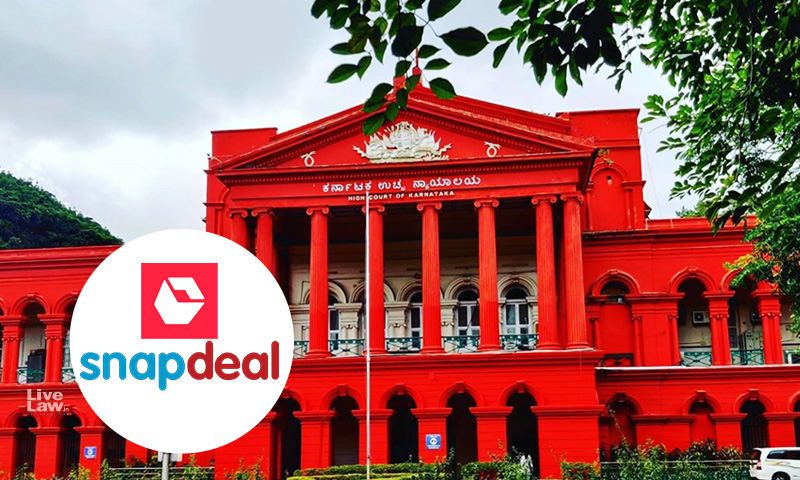 The Karnataka High Court has ruled that an intermediary as defined under the Information Technology Act or its directors/officers would not be liable for any action or inaction on part of a vendor/seller making use of the facilities provided by the intermediary in terms of a website or a marketplace. A single bench of Justice Suraj Govindaraj in its order dated January 7, said :"The...

The Karnataka High Court has ruled that an intermediary as defined under the Information Technology Act or its directors/officers would not be liable for any action or inaction on part of a vendor/seller making use of the facilities provided by the intermediary in terms of a website or a marketplace.

A single bench of Justice Suraj Govindaraj in its order dated January 7, said :

"The only liability of an intermediary under Section 79(3)(b) of the IT Act is to take down third-party content upon receipt of either a court order or a notice by an appropriate government authority and not otherwise."

The court while quashing a complaint against online market place Snapdeal and its directors Kunal Bahl and Rohit Kumar Bansal also held :

"An intermediary would not be responsible and/or liable for sale of any item not complying with the requirements under the Drugs and Cosmetics Act, 1949 on its platform, since the essential ingredients of Section 18 (1)(c) of the Act, not having been fulfilled."

The company and the directors had moved the court seeking to quash an order dated 8.6.2020 and further proceedings pending before the Prl. Senior Civil Judge and CMM, Mysuru in an alleged offence registered for violation of section 18(c) of the Drugs and Cosmetics Act.

The Drug Inspector has filed the Complaint on the basis of information allegedly received by the Deputy Drugs Controller, Mysore on 20/11/2014. It was alleged that in October 2014, M/s Adept Biocare, a proprietary concern of one Mr. Amandeep Chawla, created a seller account on Accused No. 2s' online marketplace for listing and selling his own products namely--SUHAGRA-100 Tablets (Sildenafil Citrate Tablets 100 mg). During the period between 13.10.2014 and 16.12.2014, Snapdeal warned Accused No.1 not to sell the said tablets on the Website.

On 10/1l/2014, one Mr. Manjunath placed an online order and the same was delivered to him on 20/11/2014. It is alleged that Snapdeal has exhibited SUHAGRA-100 mg Tablets for sale and provided a platform to Seller and purchaser. On the basis of the above it is alleged that there is a violation under Section 18(c) of the Act, which is punishable under Section 27(b)(ii) of the Act.

Arguments on behalf of company and directors.

Senior Advocate C V Nagesh appearing for the petitioners submitted that "An order taking Cognisance is required to be done by way of a speaking order and the said order requires to be passed after due application of mind.  The sine qua non for taking cognisance of an offence is the application of mind by the Magistrate and his satisfaction that the allegations, if proved, would constitute an offence, in the present case, a mere perusal of the Impugned Order makes it abundantly clear that the same does not disclose application of mind".

Further he also argued that "In the order issuing Summons, the learned Magistrate has not recorded his satisfaction about the prima facie case as against Respondents 2 to 7 and the role played by them in the capacity of Managing Director, Company Secretary or Directors which is sine qua non for initiating criminal action against them".

It was also said that the concept of 'vicarious liability' is unknown to criminal law.There is no specific allegation made against any person but the members of the Board and senior executives are joined as the persons looking after the management and business of the appellant Company.

The counsel also said that in the present case, a mere perusal of the impugned order, makes it apparent that the same does not disclose any application of mind for the purpose of coming to the conclusion as to why each of the accused including the Petitioner herein, are required to be proceeded against. When there are multiple accused, the order is required to disclose the application of mind by the Magistrate as regards each accused.

Finally he pointed out that there was a delay in filing Complaint of nearly six years, though the transaction occurred in the year 2014. No explanation or justification has been afforded for the unreasonable delay caused by the Respondent, and as such the same is fatal.

Advocate C.Nageshwarappa, submitted that the fact that the Petitioner owns marketplace Snapdeal is sufficient to prosecute him for any offence or violation committed by any seller on the platform. The order of cognisance dated 8.6.2020 passed by the Magistrate is proper and correct. The Magistrate cannot be expected to write a detailed order. His prima facie satisfaction is sufficient for the purpose of taking cognizance, as also for issuance of summons. The order dated 8.6.2020 satisfies both the requirements and therefore, is not required to be interfered with.

It was also submitted that e-commerce transactions since the transaction occurs across the country, it cannot be expected for a purchaser of a product in one part of the country to proceed against the e-commerce website only where it is registered and therefore, the Mysore Court where the item was ordered and delivered could exercise jurisdiction.

It was also said that "Irrespective of whether accused No.2 is considered as an intermediary or not, there could be no product which could have been advertised for sale contrary to the prohibitions under the Drugs and Cosmetics Act. Accused No.2 being the entity which provided a platform and permitted advertisement for sale of the said prohibited item, accused No.2 and in turn accused Nos.3 and 4 being its directors are liable to be prosecuted".

The court on considering the facts of the case and the order passed by the trial court held that "The order of cognisance dated 8.6.2020 is not in compliance with the requirement of Section 191(1)(a) of the Cr.P.C and further does not indicate the procedure under Section 204 of Cr.P.C having been followed."

The court also held that when the accused is having an office, branch office, corporate office, sales office or the like within the Jurisdiction, the Magistrate where the offence has been committed and or continues to be committed, there would be no requirement for any enquiry under Section 202 of Cr.P.C. It would, however, be required for the Magistrate to in the order of issuance of summons/process record as to why the enquiry under Section 202 of Cr.P.C is not being held.

Similarly, no inquiry is needed to be conducted in the event of the accused being an individual, who has a temporary residence within the Jurisdiction of the Magistrate. However, when the accused has no presence within the Jurisdiction of the Magistrate where the offence has been committed, then it would be mandatory for an enquiry under Section 202 of the Cr.P.C to be held.

This process is required because if the accused being aggrieved by the issuance of summons, the said accused can move petition under section 482 CrPC. "If there is any delay, in such challenge and/or if challenge has not been made within reasonable time, the accused would not be entitled to raise the grievance that the procedure under Section 202 of Cr.P.C. has not been followed on account of delay and latches."

Justice Govindaraj also held that "Only a Court in which the accused has a presence, like registered office, branch office, corporate office or the like could exercise Jurisdiction as regards an offence relating to an e-commerce transaction. However, this would not apply to a Cyber Crime, which comes under global jurisdiction according to the IT Act, 2000. This means that any cyber-crime complaint can be registered with any of the cyber cells in India, irrespective of where the crime was originally committed.