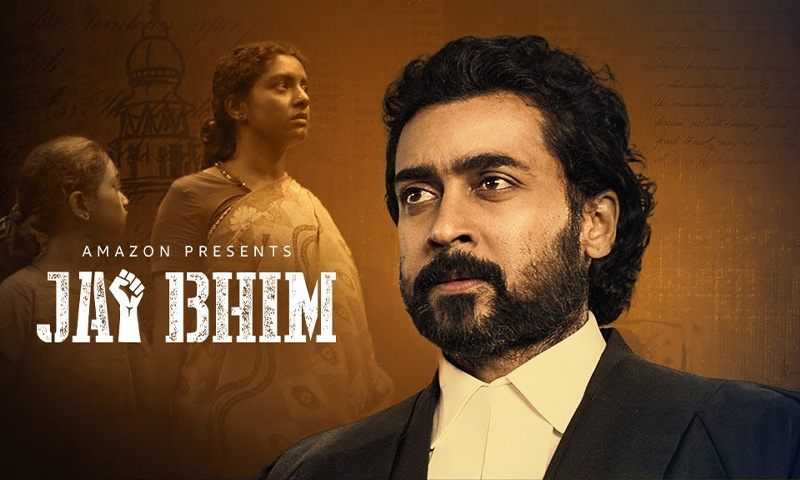 In the controversy surrounding 'Jai Bhim' movie, the President of Vanniyar Sangam has filed a defamation complaint against its makers for allegedly insulting the Vanniyars by falsely portraying their community. The complaint also alleges that the misleading depiction of a community that has fought for social empowerment of the marginalized sections of society has incited discord and...

In the controversy surrounding 'Jai Bhim' movie, the President of Vanniyar Sangam has filed a defamation complaint against its makers for allegedly insulting the Vanniyars by falsely portraying their community.

The complaint also alleges that the misleading depiction of a community that has fought for social empowerment of the marginalized sections of society has incited discord and disharmony between communities.

The complaint has been filed before Judicial Magistrate II, Chidambaram, requesting the court to take cognizance and try the accused for offences under Sections 153 (Wantonly giving provocation with intent to cause riot), 153A(1) (Promoting enmity between different groups on grounds of religion, etc.), 499 (Defamation), 500 (Punishment for defamation), 503 (Criminal intimidation), 504 (Intentional insult with intent to provoke breach of the peace) and 505 (Statements conducing to public mischief) of the Indian Penal Code.

Previously, Chidambaram Police had refused to register the complaint and thereafter, the complaint preferred to the Superintendent of Police, Cuddalore, was also not acted upon, it is stated.

This development comes ten days after a legal notice was issued to the makers of film, seeking rupees five crores as compensation.

In the complaint, Vanniyar Sangam adds that the reply to the defamation notice was a clear indication that the creators weren't remorseful of portraying the community in a bad light. They also refused to tender an unconditional apology as demanded in the legal notice, says the complaint.

The complaint also lists out the allegedly problematic aspects of the film that has been viewed by several lakhs of people, released through OTT Platform Amazon, arraigned as the fifth accused.

The complainant states that 'Agni Kundam' is a sacred symbol of the Vanniyar Community for many centuries. In one of the scenes involving the antagonist Police Inspector who commits a custodial murder, 'Agni Kundam' symbol is displayed in a calendar above him as a culpable imputation of the community as a whole, the complaint explains.

"The accused have deliberately got printed a calendar of the year 1995 with the symbol of Agni Kundam with the caption of "Kshatriya Kula Manadu, Villupuram" in which clearly exhibited the intention of accused persons, having malafide intention of defaming the members of Vanniyar sangam and damaging the image and reputation of entire vanniyar community", states the complaint.

The complainant's version is that the accused deliberately named the antagonist Inspector as 'Guru', drawing a resemblance between one of the prominent leaders of Vaanniyar Sangam, Late. J. Guru, who was a former Sangam President and a former MLA. This should be seen in the background that as far as other characters are concerned, their reel names were consistent with their real names. Even though the real life story has Anthonysamy, a Christian, as the sub-inspector who committed custodial torture, the makers of the film deliberately opted out that detail and chose a name that has significance to the Vanniyar community, says the complainant.

"The accused have projected the said wicked person, a wrong doer, as if he belonged to vanniyar community thereby imputing that the members of the Vanniyar community are prone to commit wrong and illegal things while in real life said Sub Inspector does not belong to Vanniyar Community", contends the complainant.

The complainant states that the accused cannot defame Vanniyar community by distorting facts for the sole purpose of sensationalizing the issue and earning substantial revenue even when the accused assert that it's a depiction of a real-life incident.

"The symbolic representations in various sequences in the movie Jai Bhim" is per se defamatory and intentional act and targeted to defame and cause greater disrepute to the complainant community", explains the complainant.

The complainant has also said that Kanmani Gunasekaran, who has given local language words in Jai Bhim, stated that original facts have been suppressed and Vanniyar community has been defamed in the movie. Parvathy, the wife of Late Rajakannu (victim of custodial torture), has also confessed that her consent has not been obtained by the accused persons before releasing the offending movie, submits the Vanniyar Sangam President.

Suriya Sivakumar had recently made a statement as a reply to PMK Leader Dr Anbumani Ramadoss' criticism of the movie's depiction of the Vanniyar community.

Suriya clarified that the picture only intended to show the real-life struggle waged by Justice K. Chandru. He also noted that none of them had any intentions to insult any community and that a few mistakes pointed out in the scenes were corrected immediately.

Recently, the Bar Council Of Tamil Nadu & Puducherry Chairman P.S Amalraj wrote to TJ Gnanavel, heartily congratulating the makers for depicting a real-life incident revolving around a poor victim and her struggle for justice without deviating from its truthfulness.