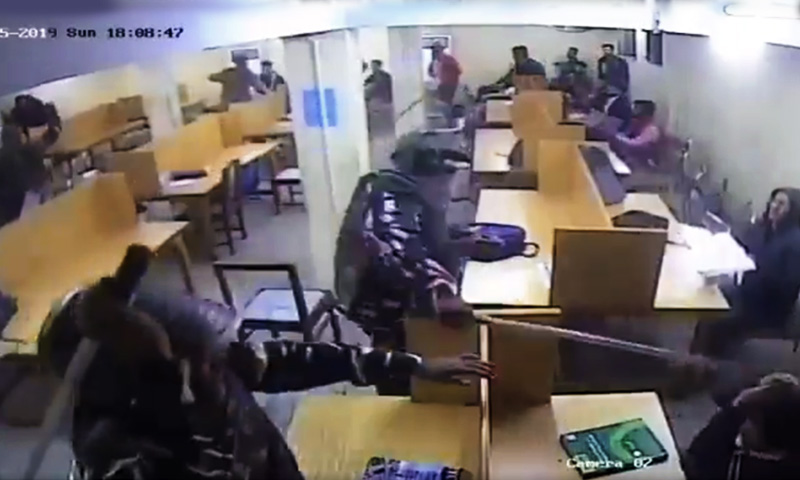 x
""Though it could be argued that while so acting, the police/ respondents had allegedly exceeded their jurisdiction and used more force than necessary in some instances, it cannot be said, by any stretch of imagination, that the said acts allegedly committed by the respondents were wholly unconnected to their official duty."

The Saket Courts (Delhi) has dismissed an application filed by Jamia Millia Islamia under Section 156 (3) CrPC seeking registration of FIR against Delhi Police Officials for allegedly committing various atrocities in December 2019 within the University Campus following anti-CAA protests. The Metropolitan Magistrate Rajat Goyal was hearing the Application by University alleging that...

The Metropolitan Magistrate Rajat Goyal was hearing the Application by University alleging that Delhi Police committed various atrocities including vandalizing public/ University property and unnecessary use of force against hapless students who were only exercising their democratic right to protest peacefully.

Facts as alleged by the University

The University alleged that in pursuit of clearing the crowd, police officials broke into the University Campus without seeking any sanction and used excessive and arbitrary force and thrashed several security guards of the University and also University Students.

It was also alleged that the said police officials caused destruction of University property and fired tear gas shells and conducted lathi charge. That they also hurt religious sentiments of locals of the area by entering into the University Mosque.

That complainant gave a complaint o the SHO PS Jamia Nagar and concerned ACP and DCP in this regard but no action was taken on the said complaints.

The Question before the Court

Since all the alleged acts were said to have been committed by serving public servants, the Court primary focused on the question as to whether the matter fell within the ambit of Section 197 Cr.P.C.

It may be noted that as per Section 197 of the Criminal Procedure Code (Cr.PC), no court can take cognisance of criminal charges against a public servant (for an offence alleged to have been committed by him while acting or purporting to act in the discharge of his official duty), unless previous sanction to prosecute him has been received from a competent authority.

At the outset, the Court observed that if in doing his official duty, a public servant acts in excess of his duty, but there is a reasonable connection between the act and the performance of the official duty, the excess will not be a sufficient ground to deprive the public servant of the protection.

Regarding Section 197 of CrPC, the Court said,

"In order to bring a case under the provisions of section 197 Cr.P.C., it must be seen that discharge of official duty is not merely a cloak for committing the act in question and that there is reasonable nexus between the alleged act and official duties of the public servant concerned. If there exists such a reasonable nexus, then even the fact that the alleged act might have been in excess of or in derogation of prescribed scope of duties will not take out the case from within the ambit of section 197 Cr.P.C. and protection afforded by section 197 Cr.P.C. will be available to the public servant in such cases."

Coming to the facts of the Case, the Court noted that in the instant case, all the respondents were acting in order to control law and order situation which had emerged in relation to the Citizenship (Amendment) Act, 2019.

The Court also observed that the said protests had taken a violent turn in many parts of the country and that law and order situation had become tense.

Importantly, the Court took not of the fact that some of the protests had become violent and that police, including the respondents, were acting to control the said protests at the relevant point of time, so as to prevent violence and prevent law and order situation from further deteriorating.

Regarding the role of Delhi Police in controlling the protest, the Court remarked,

"Though it could be argued that while so acting, the police/ respondents had allegedly exceeded their jurisdiction and used more force than necessary in some instances, it cannot be said, by any stretch of imagination, that the said acts allegedly committed by the respondents were wholly unconnected to their official duty."

"It could also be argued that the situation perhaps could have been handled by the respondents in a better way and that some restraint should have been shown by the police/ respondents in order to differentiate between peaceful student protesters and anti­social elements who had attempted to hijack the entire movement. However, the lack of such restraint exhibited by the police/ respondents and excesses committed in trying to control the situation are very much related to official duties of the respondents."

Noting that respondents had broken into the University Campus for clearing the crowd which had gathered there to protest against Citizenship (Amendment) Act, 2019, the Court said,

"Actions of respondents in doing so are clearly connected to their official duties, though some of the said actions might be questionable."

"This court has no hesitation in holding that acts allegedly committed by the respondents fall within the purview of section 197 Cr.P.C., being acts committed in discharge of official duties."

In view of the above discussion, the application u/s 156(3) Cr.P.C. and accompanying complaint were thereby dismissed.