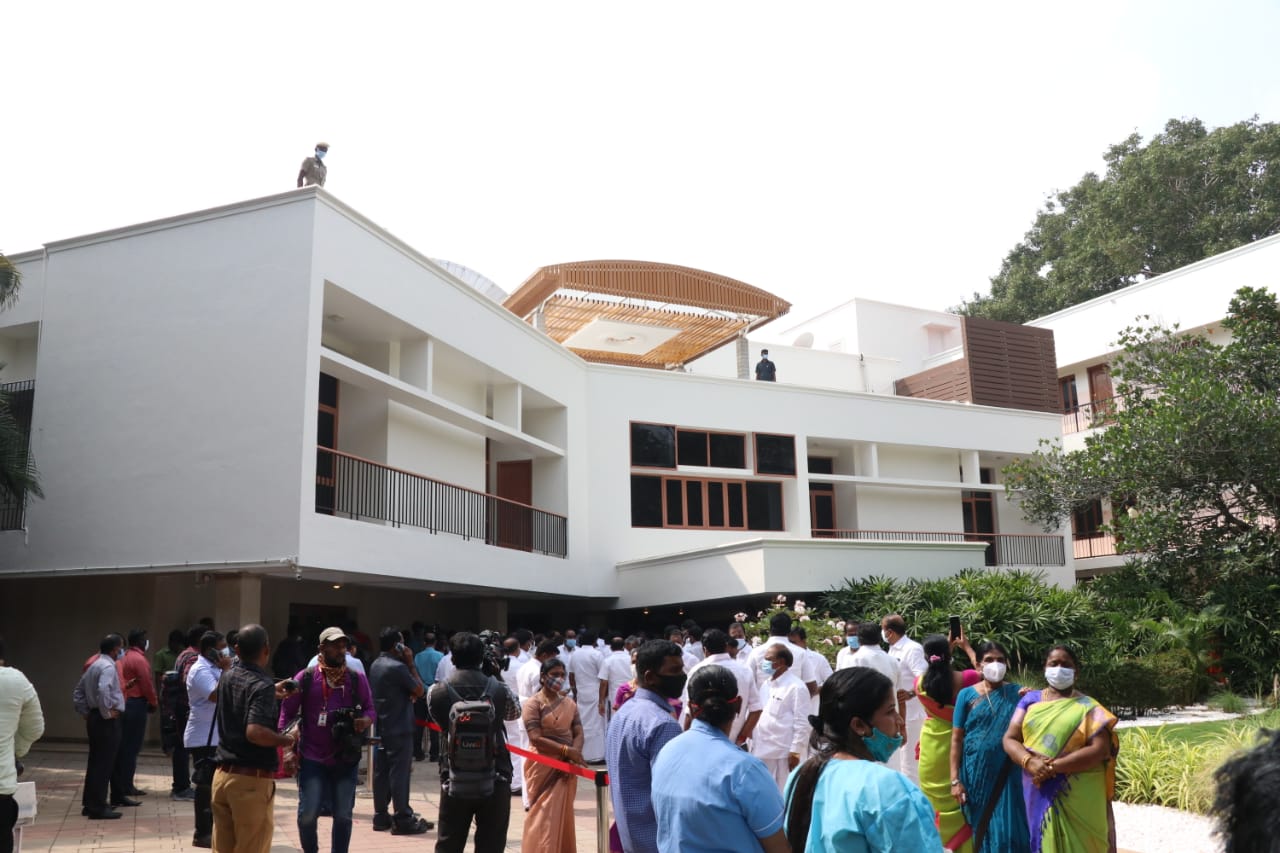 x
It may not be appropriate for the Government to present the Court with a fait accompli, and to rush to declare open a memorial, when the owners thereof are clueless as to the actual value of the movables that they are entitled to in law: Madras High Court

The Madras High Court on Wednesday (27th January) allowed the State Government to move ahead with the inauguration event (which took place today) of late Tamil Nadu Chief Minister J. Jayalalithaa's residence 'Veda Nilayam' as a memorial. The Bench of Justice N. Seshasayee, however, noted that the Government should have refrained from opening the memorial and prohibited the public...

The Bench of Justice N. Seshasayee, however, noted that the Government should have refrained from opening the memorial and prohibited the public entry into the memorial until further hearings in the case.

The petitioners, Deepak and Deepa, preferred separate writ petitions challenging the notification for acquisition of the residence (named "Veda Nilayam") of the former Chief Minister of the State, Late. J. Jayalalitha into a memorial, or the award passed by the Land Acquisition Officer.

It may be noted that 'Veda Nilayam' was owned by Ms. J. Jayalalitha. While so, on 05th December 2016 she died intestate.

Both the petitioners, Deepak and Deepa, being the children of the brother of Jayalalitha, are the nephew and niece of the former Chief Minister.

While the petitions were pending for hearing, the Government notified its intent to declare open the aforesaid residence of the former Chief Minister as a memorial in a function (the function took place today i.e., on 28th January).

In this backdrop, the Petitioners challenged the Government's decision to inaugurate the Memorial.

On 05th October 2017, the Tamil Nadu Government came up with G.O. (Ms) No. 180 (Tamil Nadu Development and Information (Memorials) Department), granting administrative sanction for acquiring 'Veda Nilayam' to constitute it as a memorial for the late Chief Minister.

Soon thereafter, the TN Government went ahead with the acquisition proceedings of Veda Nilayam' (the proposed site of the memorial) under The Right To Fair Compensation And Transparency In Land Acquisition, Rehabilitation And Resettlement Act, 2013 [RFCTLARR Act, 2013].

Whether the respondents should be permitted to declare open the residence of the former Chief Minister as the memorial as scheduled?

The Court noted that the RFCTLARR Act, 2013 does not permit the acquisition of a building to dedicate it as a memorial, for the same does not fall within the ambit of the definition of public purpose within the meaning of Sec.3 read with 2(1) of the Act.

In this backdrop, the Court took cognizance of the fact that converting the residential house of late Ms. Jayalalitha will not fall within the definition of public purpose within the meaning of Sec. 2(1) of the Act.

The Court further noted that the Government consciously maneuvered the proceedings to deny the petitioner, a right of hearing under the stage of Section 11 & Section 12 of the Act, when it knew that Deepak and Deepa are claiming themselves to be the heirs of late Ms. Jayalalitha.

"So far as movable properties of late Ms.J.Jayalalitha are concerned, they are not even valued, and it is unfair and impermissible for the Government to declare open 'Veda Nilayam' as a memorial when the entire acquisition proceedings is not yet complete."

"It may have to be underscored here that the petitioners have been relentless in their pursuit to inform the officials at all levels that they are the Class II heirs of late J. Jayalalithaa. Whether ignoring the same and proceeding with the acquisition process, which might have denied the petitioners personal notices under Sec.11 and 12, is appropriate, or how it impacts the acquisition proceedings itself, may have to be assessed only during the final hearing of these cases, but the facts as are now made available before the Court do establish that the petitioners have a strong prima facie case, and an arguable case in that."

Further, noting that so far as the movable properties of late Chief Minister are concerned, no inventory has been made yet, the Court said,

"An inventory of these articles therefore has to be taken only in the presence of the parties who are likely to be affected by it. Necessarily, when the Claim Commissioner constituted under the Act, values these articles, he ought to grant the petitioners a right of hearing. Here, this Court finds no provision in the said Act enabling the Government to appropriate the movables belonging to late Chief Minister without awarding compensation to the parties to who they belong."

"It may not be appropriate for the Government to present the Court with a fait accompli, and to rush to declare open a memorial, when the owners thereof are clueless as to the actual value of the movables that they are entitled to in law."

Lastly, noting that arrangements for holding the function has been made, and any stay of the function might create considerable difficulties for the Government, the Court passed the following Order:

The matter has now been posted for final hearing 24th February 2021.