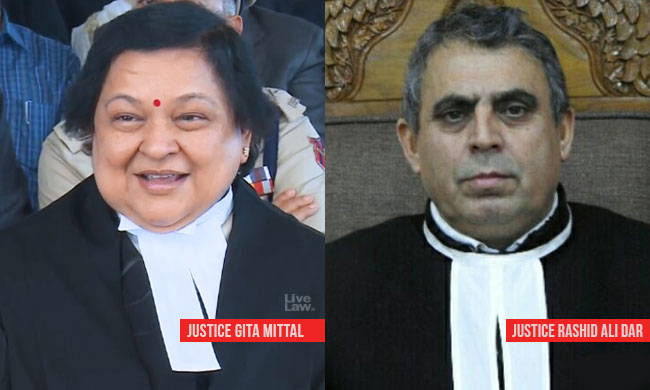 The order was passed by the division bench of Chief Justice Gita Mittal and Justice Rashid Ali Dar, in a petition filed by one, Syed Tassadque Hussain, who asserted that no access to legal aid was made available to poor and financially unstable detenus who were detained under the recent orders of detention in the State.

In this regard, the court said,

"The respondents shall ensure that legal assistance is made available to all the detenus. In this regard, if necessary, assistance of the Member, Secretary, Jammu and Kashmir State Legal Service Authority may be taken by the respondents for ensuring legal aid which could be arranged through video conferencing as well."

The Petition was filed complaining that the amendments made to Article 22 of the Constitution had not been brought into force in Jammu and Kashmir.

Article 22 of the Constitution was amended by the 44th Constitutional Amendment Act whereby clause 4 was substituted with the following words:

"No law providing for preventive detention shall authorize the detention of a person for a longer period than two months unless an Advisory Board constituted in accordance with the recommendations of the Chief Justice of the appropriate High Court has reported before the expiration of the said period of two months that there is in its opinion sufficient cause for such detention."

He had also contended that the delegation of powers in Divisional Commissioners or District Magistrates, to detain the persons under Sections 8 and 16 of the PSA Act, was illegal and arbitrary. He further contended that Section 10 of the Act was also contrary to law.

Section 8 of the Act empowers the government to hold individuals (amongst other grounds, such as timber smuggling), on the basis of an official apprehension that they constitute a danger to security of state or public order. This means that there is no requirement for a complaint or suspicion of a crime having been committed by them, no police investigations and for that matter, no charges.

The State opposed the petition, stating that the same was not maintainable in view of the provisions of the J&K Reorganization Act, 2019.

Passing the aforementioned orders regarding access to legal aid, the court posted the matter for November 6 for further directions on merits.

The Petitioner is being represented by Senior Advocate S. T. Hussain with Advocate Nida Nazir and the Respondents by Advocate General D. C. Raina with GA Sajad Ashraf and Advocate T. M. Shamsi.