Justice For All Must Ensure That Justice Reaches The Remotest Corners Of The Country: CJI Gogoi At NALSA Meet 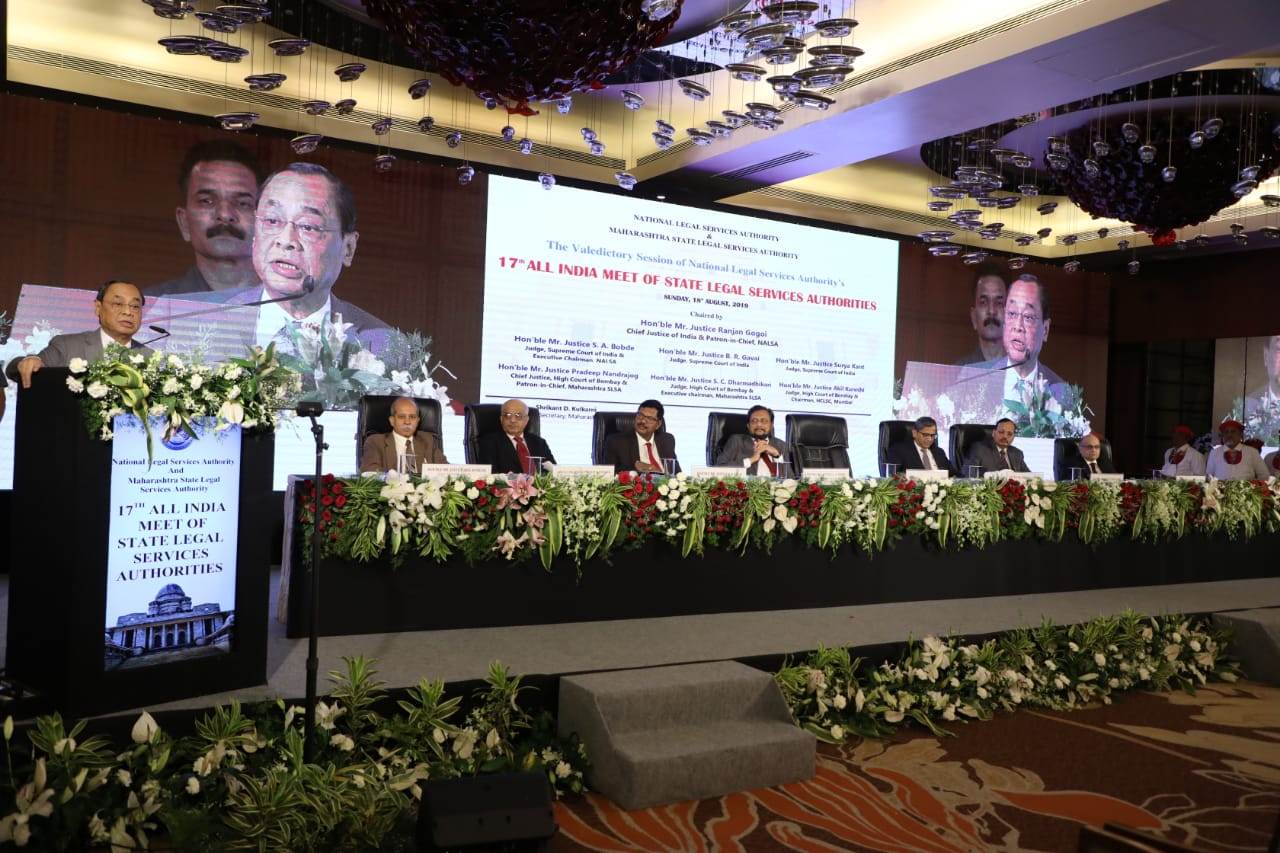 It was put forth during the meet that NALSA had utilised all its funds in the past three years and disposed off over 24 lakh cases in both pre-litigation and litigation stages. It provided legal aid to over 14 lakh people since last year and conducted over 1.7 lakh legal awareness programs.

Chief Justice of Bombay High Court, Justice Pradeep Nandrajog said that the agenda of the meet revolved around importing innovation, technology and public defenders system amongst others, in the services delivery mechanism and the same would earmark the agendas for the next meet. He also said that the exercise of introspection and reformulation of methods of delivering legal aid was a significant process which would serve the country in a longer run.

Chief Justice of India, Justice Ranjan Gogoi also addressed the gathering where he appreciated the idea of contemplating a futuristic approach in the legal aid delivery mechanism. He emphasized that legal education must be imparted in schools apart from spreading rudimentary awareness to ensure broader access to justice. 'NALSA and SLSAs are crucial vehicle for discharging a constitutional mandate - justice for all and must ensure that justice reaches the remotest corners of the country and to the last person', he said.

He went on to highlight the significance of "leveraging technology for better and timely access" to justice. He suggested the development of an App in regional languages for better access across the country. However, he said, the emphasis must not be laid on the quantity of legal services but rather, on its quality.

"Quality of legal services must be a focus rather than just quantity and batted for a rigorous selection process and better terms of service and incentives for panel lawyers", he said. He also advised the legal services authorities to break the wall beyond awareness campaigns and engage students to act as representatives in "the mission of access to justice".

Executive Chairman of NALSA and sitting Supreme Court judge, Justice S.A. Bobde, presided over the meet and recapitulated the discussions held over two days. He said the meet was a stepping stone in bringing about a revolutionary change in the approach of SLSAs. He stated that implementation of Legal Aid Defence Counsel System in selected states from each zone would facilitate availability of legal aid for the poor and marginalized by seasoned lawyers.

The members agreed that proper documentation of activities was vital to ensure enhanced sensitivity, accountability and responsiveness to the clients. Representatives from the states also discussed the challenges faced by them and best practices adopted in imparting legal services. The need for pre camp activities, chalking out vulnerabilities, post camp feedback, effective use of Para Legal Volunteers and coordination with NGOs and government departments was also acknowledged by the members.

Lastly, Justice Bobde suggested the determination of the frequency of camps held and a number of people benefiting therein to incentivise legal service authorities and stimulate a competitive spirit among them.