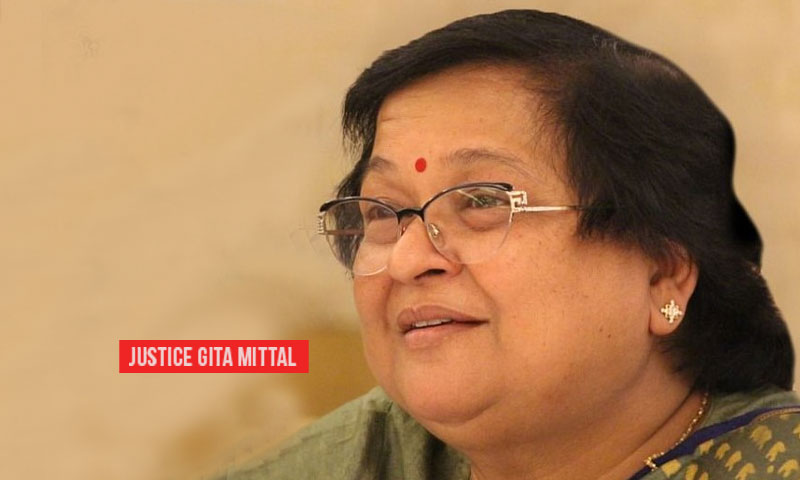 In a first for an Indian jurist, Justice Gita Mittal, former Chief Justice of Jammu and Kashmir High Court, has been conferred with the prestigious Arline Pacht Global Vision Award for 2021 by the International Association of Women Judges (IAWJ). "The conferment of this award by the IAWJ is a recognition that my efforts were of some meaning," Justice Mittal said. The Award will...

In a first for an Indian jurist, Justice Gita Mittal, former Chief Justice of Jammu and Kashmir High Court, has been conferred with the prestigious Arline Pacht Global Vision Award for 2021 by the International Association of Women Judges (IAWJ).

"The conferment of this award by the IAWJ is a recognition that my efforts were of some meaning," Justice Mittal said.

The Award will be presented at IAWJ's Biennial Conference during the virtual opening ceremony on May 7, 2021. She shares the honour with Justice Margarita Luna Ramos of Mexico.

"To me access to justice is not synonymous with access to courts. It is much more. It includes empowering every human being to recognize their right to equality in every sense; in then taking that courageous step to first finding the way and then approaching any available system (including the justice dispensation one) to ensure its meaningful availability. This has meant not only educating but making available affordable access to every human being," Justice Mittal said.

She stated that in her court administration, equality, including that of gender and opportunity to those marginalized (the transgender, the acid violence survivor, the disabled) was ensured.

"I can only say that I worked hard and honestly to provide equal justice and access to courts to all. The current pandemic tested me to the utmost and I hope I brought some succour through my position as a judge in the orders which I passed and actions which I took even during these difficult times," she added.

Justice Gita Mittal was the first woman to serve as the Chief Justice of J&K High Court. During her 28-months long tenure, she initiated many programmes to make justice available to all, especially women.

She launched a YouTube channel for the J&K courts, beside a unique programme called 'Insaaf Ki Dastak' to enable litigants residing in remote, far-flung areas of Jammu, Kashmir and Ladakh to file cases via existing postal service, without having to visit Courts. She also set up 'camp courts' in different locations.

At present, Justice Mittal is the Chairperson of Broadcasting Content Complaints Council (BCCC), an independent, self-regulatory body for general entertainment channels set up by the Indian Broadcasting Foundation (IBF). She is the first woman to hold this position.

Justice Mittal is an alumna of Campus Law Centre, Delhi University, and began practicing in 1981. She was appointed as an Additional Judge of Delhi High Court in July, 2004, and was confirmed in February, 2006.

Having been appreciated for several of her initiatives and verdicts, she received the Distinguished Alumna Award in 2008 from the Vice President of India, awarded by the Lady Shriram College for Women.

Justice Mittal became a member of the International Association of Women Judges in 2005. She presented papers at IAWJ Biennial / Regional Conferences at Panama, London, Arusha, South Korea, New Zealand and Philippines and was also invited to the Vatican to speak at a summit of Judges and Prosecutors on Human Trafficking.

Additionally, she was invited to contribute to national and international discussions at various forums and to present papers on topics including those relating to Access to Justice for the disadvantaged; Gender issues; Protection of human rights; Death penalty; impact of incarceration on women; equality in judicial appointments among others.

The Arline Pacht Global Vision Award was constituted in 2016 and is presented to a sitting or retired woman judge to recognize her long-term contribution to the IAWJ and the IAWJ's goals which encompass "promoting and protecting the human rights of and equal justice under the rule of law for all people, but especially for women and children; promoting and empowering women judges who can help uproot gender bias, end discriminatory laws, advance gender-responsive courts, ensure access to justice and promote human rights for all."

Many distinguished jurists have been integral members of IAWJ. These have included Chief Justices Brenda Hale from the UK, Beverly McLachlin from Canada, Georgina Wood from Ghana, Dame Sian Elias from New Zealand, Graciela Dixon from Panama, Sushila Karki from Nepal and several Supreme Court judges among others.

From the Indian judiciary, Justices Sujata Manohar and Ruma Pal from the Supreme Court and several High Court judges have been its members.

Founded in 1991 with its headquarters in Washington, IAWJ is an ecosystem of more than 6000 global women judges from over 100 countries.

IAWJ's members represent all levels of the judiciary worldwide, creating a powerful network of influential leaders united by their commitment to equal justice and the rule of law.

It works with its members around the world to cultivate a growing global network of women judges in order to create opportunities for judicial exchange, pioneer judicial education programs that advance human rights, eliminate gender bias from judicial systems, promote judicial leadership and enhance equal access to the courts.