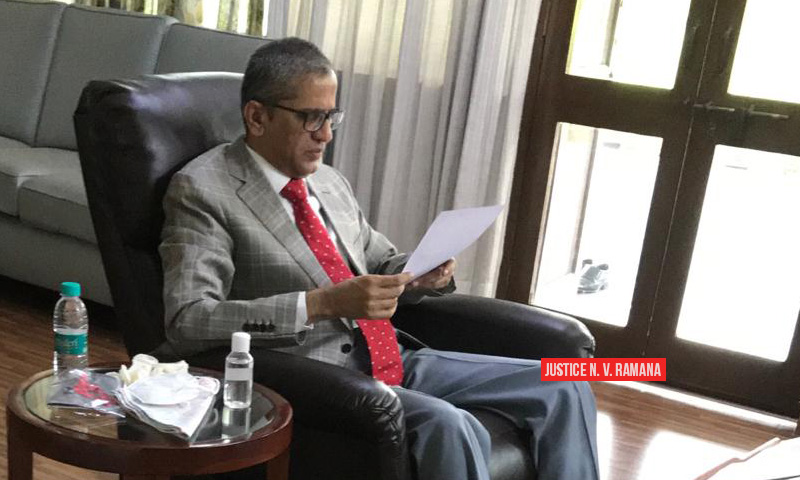 Speaking at a webinar on Thursday, Supreme Court Judge, Justice NV Ramana emphasized on the need to provide door-step legal remedies during the prevalent crisis created by the pandemic.

"During such times, when the victims cannot reach us, it imperative for us to reach them," he said while highlighting the plight of women and children during the lockdown.

Justice Ramana, also the Executive Chairman of NALSA, was speaking at the launch event of NALSA's 'Handbook of Formats: Ensuring Effective Legal Services'.

He expressed concern over the spike in reported domestic violence and child abuse cases during the lockdown and assured that "persistent efforts" have been undertaken by the authority to provide legal assistance to the victims.

"One of the critical areas which has come to our notice was rising violence within the family itself. We also saw increasing rise in the number of instances of child abuse. During such times, when the victims cannot reach us, it imperative for us to reach them. Acknowledging the urgency of the situation we have established One Stop Centres (OSCs). Persistent efforts have been taken to provide legal assistance, through teleservices of female Panel Lawyers in every district. In other matters, petitions have been filed under the Domestic Violence Act," he said.

Pertinently, NALSA has also released a Toll free National Legal Helpline 15100, to ensure that no person in need of justice is denied the same.

Justice Ramana underlined the active role played by the Legal Service Authorities across the country to ensure decongestion of prisons during the pandemic.

"As per the directions of the Supreme Court, the SLSAs have actively assisted High Powered Committees to identify and complete the necessary formalities for the release of prisoners, both undertrials and convicts, during the pandemic," he said.

He noted that, as many as 58,797 undertrial prisoners and 20,972 convicts on parole etc. had been released with the assistance of the Legal Services Institutions and legal representation had been provided to 9,558 persons at the remand stage.

He also touched upon the looming migrants issue and said, "Massive reverse migration will invariably lead to increase in poverty, inequity and discrimination."

The Handbook, prepared in collaboration with the Commonwealth Human Rights Initiative, is an attempt to improve the quality of legal services by strengthening documentation and reporting by Legal Services Institutions across the country. It contains formats that will enhance data collection, enabling NALSA to analyse trends and patterns emanating from data, and identification of issues at the micro level.

"Handbook is the first crucial step towards standardizing and bringing in uniformity in the use of formats. This handbook is an effective tool for management of human resources and in future will prove as a small but significant step in realizing justice for all," Justice Ramana said in his keynote address.