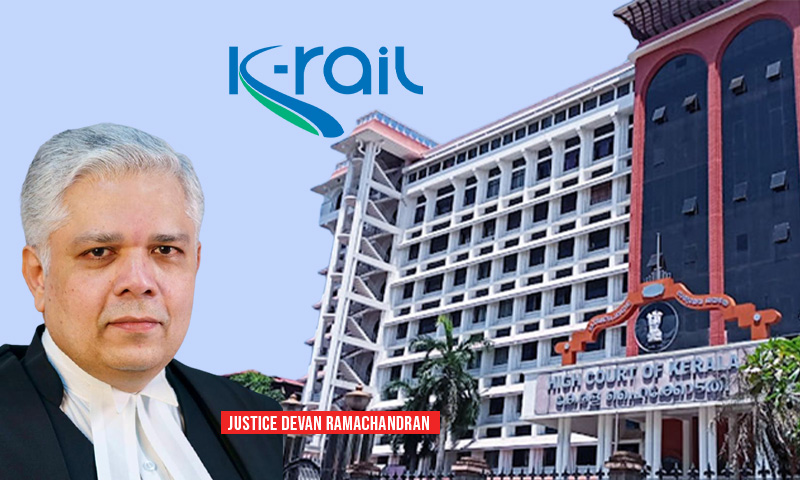 The Kerala High Court was informed by the State on Tuesday that the practice of placing survey marks has been done away with and the social impact assessment (SIA) for the K-rail project was being conducted through digital methods such as geo-tagging wherever the people take objection to lay survey stones for the survey.

Justice Devan Ramachandran recorded this submission and observed that the endeavour of the court that it has been attempting to achieve so far through this litigation has now begun to bear fruit even without directions being issued.

"This is a developmental project. But is this development? Development happens when social impact is kept to the minimum. But for creating social impact assessment, larger social agony was created here. This is worrying me."

The Court was adjudicating upon a batch of petitions challenging the laying of large survey stones on private land without issuing prior notices to the concerned individuals.

When the government submitted that it did not propose installing survey stones without the permission of the landowners, Justice Ramachandran remarked that this exactly was what the Court had been repeatedly directing the State throughout the course of the case. The government had then tried to dismiss the opposition to the laying of survey stones as being actuated by certain other motives.

"The present stand of the government that they did not propose to install survey stones except with the permission of the landowners, is what this court has been telling them throughout the life of this litigation. Initially, this court did not interdict the survey. But subsequently seeing the social anarchy that was being created, on account of the frenetic opposition of certain individuals against the stones being laid in their properties even without individual notice being issued to them, this court had no other option but to interdict."

In fact, it added that it was trying to put the government on the right track. When the court had asked, the government submitted that the landowners would not be given notice before undertaking the survey. The court said that the officials walking into a property of a landowner for lying stones without giving him/her prior notice was disheartening. The government had to take into confidence the people before implementing any project.

The letter dated April 2, 2022, issued by the director of the survey permitted the installation of a larger survey stone notwithstanding the interim order of the court or without seeking permission from the court apparently based on a letter issued by the Kerala Rail Development Corporation Ltd ( KRDCL) seeking permission to install larger stones.

The concerned officers, including the KRDCL and the Director of Survey, were asked to clarify why such a step was taken for conducting the survey by putting up large stones knowing fully well the interdiction ordered by the Court.

Similarly, the State was directed to clarify when exactly the survey commenced and whether it was done only after issuing the notification under Section 4 (1) of the Fair Compensation Act.

The matter will be taken up again on June 2.

During a previous hearing of the case, the Bench had remarked that it has inputs that assure that none of the properties marked by the survey stones in furtherance of the project will be subject to any restrictions whatsoever. This was affirmed today by the State which submitted that the lands marked by survey stones are not frozen and are open to mortgage and sale while adding that this may be recorded in the order.

However, the Court opined that the public will only find reassurance once the State itself declares so, rather than finding it in a court order.

Previously, the Court had expressed its concerns if the property so marked be used by landowners for sale or mortgage and if such property can be produced to avail bank loans.

The Judge had earlier directed the State to temporarily defer steps for the survey of the writ petitioners' properties until the matters were called up for the next hearing. However, this order was set aside by a Division Bench noting that Social Impact Assessment cannot be seen as an empty formality and that the public is entitled to know the adverse impact and consequences they are likely to suffer.

The Silver Line Project is a semi high-speed rail corridor connecting one end of the State to the other and was announced for the first time over 8 years ago.

The Kerala Rail Development Corporation (K-Rail), a joint venture of Indian Railways and the state government, is to implement the project. According to K-rail, the cost of the project was estimated to be around 64,000 crores. Although its Detailed Project Report received a nod from the State cabinet, approval from the Centre is still pending.

The primary grievance of the petitioners was concerning the installation of survey marks by the appellants under the Kerala Survey and Boundaries Act, 1961 engraving "K-Rail" in their properties to conduct a Social Impact Assessment (SIA) study for the proposed project.