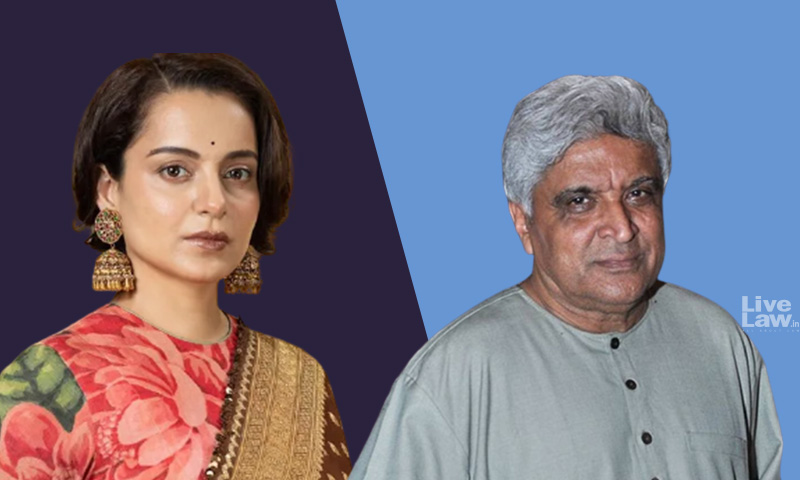 Over a year and a half after lyricist Javed Akhtar filed a criminal defamation case against Kangana Ranaut, the case is likely to proceed with the actor pleading "not guilty."

On November 2, 2020 Javed Akhtar filed the private complaint before the Andheri Metropolitan Magistrate's court accusing Ranaut of defaming him by dragging his name in actor Sushant Singh Rajput's death in her interview with Republic TV Anchor Arnab Goswami, on July 19, 2020.

Today, Metropolitan Magistrate RM Sheikh recorded Ranaut's statement after directing the media, and everyone present, to leave the courtroom at the request of Ranaut's lawyer Rizwaan Siddiquee, who claimed the actor didn't want a "media trial."

The magistrate recorded in the roznama that the offences were read over to Ranaut in vernacular language after which her plea was recorded.

"Particulars of the offence u/s. 499 and 500 IPC are recorded against the accused and read over and explained to the accused in vernacular language and plea of accused is recorded (Exh.42). Accused plead not guilty of the offence. Her plea is accepted," the magistrate ordered.

Considering the fact that Ranaut appeared pursuant to her undertaking to the court, Akhtar represented by Advocate Jay Bharadwaj, did not press for execution of a non-bailable warrant against her.

On November 2, 2020 Akhtar alleged that Ranaut defamed and damaged his "immaculate reputation" by dragging his name in actor Sushant Singh Rajput's death in her interview with Republic TV Anchor Arnab Goswami.

According to the said complaint, Kangana claimed in the interview that the Hindi film industry was run by a mafia and named Mahesh Bhatt and Javed Akhtar as people who are a part of this alleged 'Mafia'.

After Akhtar's verification statement was completed in the following month, the court directed the Juhu police to investigate the allegations under section 202 of the CrPC. After a police report, the Metropolitan Magistrate issued process against Ranaut in February 2021, directing her to appear for recording her statement.

Ranaut finally appeared today, 14 months later. Ranaut has appeared on the case only twice before. Once, to cancel the bailable- warrant issued against her when she failed to appear despite repeated requests, and second when she appeared in court but claimed she did not have faith in the magistrate.

Only recently MM RR Khan, who had been hearing until now was transferred and MM RM Sheikh began presiding over matters in 10th Court Andheri. Ranaut had made several unsuccessful attempts to get the matter transferred out of MM RR Khan's court.

It may be noted that Ranaut's verification statement in a private cross complaint filed by her against Akhtar, alleging extortion, was also recorded today. The court had barred the media from attending proceedings of her case earlier, however, before the either case could begin on Monday, the media was directed to leave.