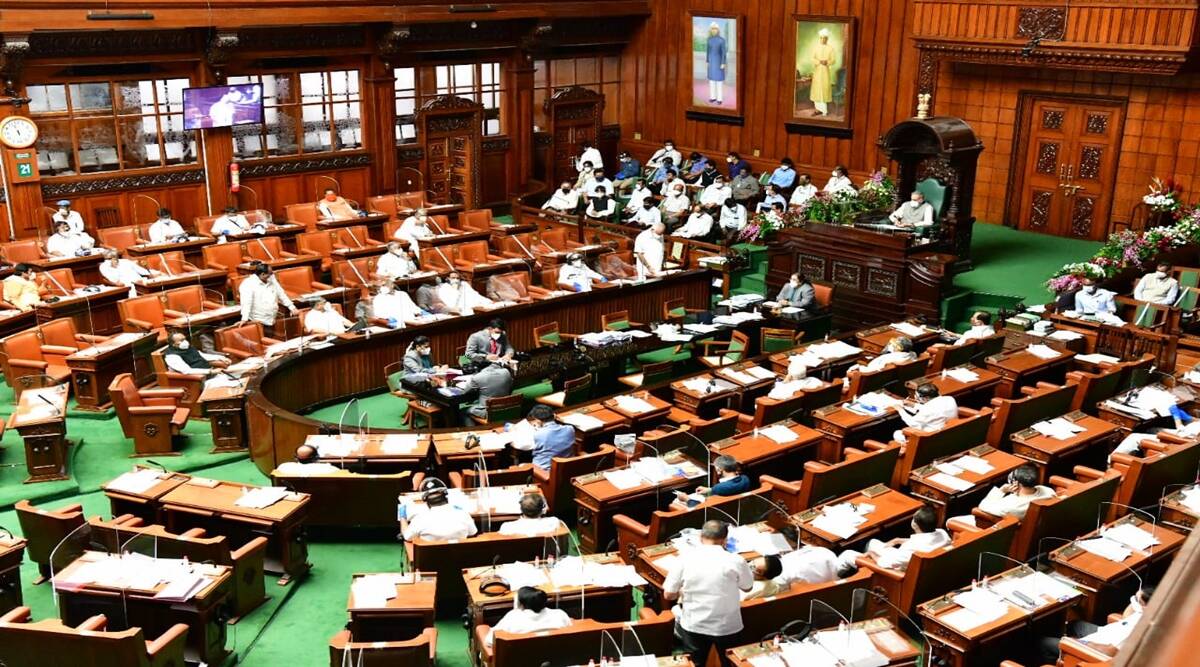 The Karnataka Legislative Assembly on Thursday passed the Karnataka Protection of Right To Freedom Of Religion Bill, 2021, which seeks to impose restrictions on religious conversions and inter-faith marriages. The bill was passed in a voice vote amid strong opposition from Congress and JD(S). The ruling BJP government had introduced the bill on Tuesday. What...

The Karnataka Legislative Assembly on Thursday passed the Karnataka Protection of Right To Freedom Of Religion Bill, 2021, which seeks to impose restrictions on religious conversions and inter-faith marriages. The bill was passed in a voice vote amid strong opposition from Congress and JD(S). The ruling BJP government had introduced the bill on Tuesday.

Religious conversion which is not done as per the procedure under the law is defined as "unlawful conversion". ​The Bill defines unlawful conversion through allurement to include offers of any temptation in form of any gift, gratification, easy money or material benefit either in cash or kind employment, free education in a reputed school run by any religions body; or promise to marry; or better lifestyle, divine displeasure or otherwise.

The bill prohibits "unlawful conversion" from one religion to another by misinterpretation, force undue influence, coercion, allurement or by another fraudulent means or marriage.
Reconversion to previous religion excluded
Further, the bill says "Conversion" means renouncing one's own religion and adopting another religion. If it is done by misrepresentation, force, undue influence, coercion, allurement or by any fraudulent means or by marriage. However, if any person reconverts to his immediate previous religion the same shall not be deemed to be a conversion under this law.
Burden of proof

Importantly, the proposed law places the 'Burden of Proof' regarding lawful conversion on the person who has caused the conversion and where such conversion has been facilitated by any person on such person.

Curbs on inter-faith marriages
As per the bill, any marriage which was done for the sole purpose of unlawful conversion or vice-versa by the man of one religion with the woman of another religion, either by converting himself before or after marriage or by converting the woman before or after marriage, shall be declared as void.
It is also said that all the offences under the Act will be cognizable and non-bailable and triable by the jurisdictional Judicial Magistrate of First Class or the Chief Metropolitan Magistrate as the case may be.

A detailed procedure to be followed has been laid down by which conversion is permitted. It is also notified that a declaration before conversion and pre-report about conversion shall be given in a prescribed form at least sixty days in advance to the District Magistrate or the Additional District Magistrate by a person who wishes to convert his religion on his free consent and without any force, coercion, undue influence or allurement.

It may be recalled that the Gujarat High Court had recently diluted similar provisions in the Gujarat anti-conversion law by declaring that the provisions will not apply to parties entering inter-faith marriage on free consent.

The High Court had made a prima-facie observation that the Gujarat law "interferes with the intricacies of marriage including the right to the choice of an individual, thereby infringing Article 21 of the Constitution of India".

Petitions have been filed in High Courts challenging similar laws passed by Uttar Pradesh and Madhya Pradesh as violative of the fundamental right to personal liberty and privacy.

The religious converter who performs a conversion ceremony for converting any person of one religion to another religion shall give one month's advance notice in Form-II of such conversion, to the District Magistrate or any other officer not below the rank of Additional District Magistrate.

Contravention of any of the criteria shall have the effect of rendering the proposed conversion illegal and void. The persons who contravene the provisions shall be punished with imprisonment and also be liable for fine.

The bill also prescribes a procedure that is to be followed post-conversion. The contravention of the provisions laid down shall have the effect of rendering the said conversion illegal and void.

The statement of objects and reason refers to the judgement in the case of Rev Stanislaus vs State of Madhya Pradesh and Orissa (1977) 1 SCC 677 of the Supreme Court in which it is held that the Right to propagate under Article 25 does not include the right to convert another person.

It also says that in recent years the state has noticed many instances of conversion by means of allurement, coercion force, fraudulent means and also mass conversion. Saying that such instances cause "disturbances to public order", the Government said that a law was necessary.
Punishment

Under the proposed legislation any aggrieved person, his parents, brother, sister or any other person who is related to him by blood, marriage or adoption may lodge a First Information Report of such conversion.