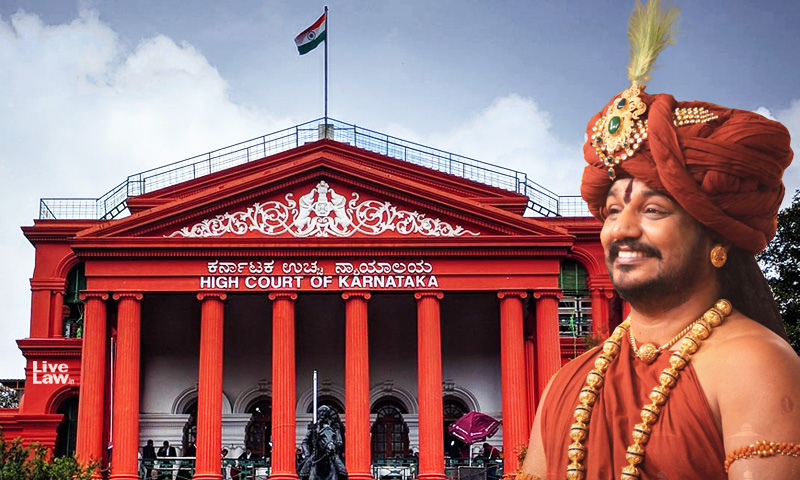 The Karnataka High Court on Monday dismissed a petition filed seeking to transfer the alleged rape case, against Swamy Nityananda @Rajshekharan and others, from Ramanagra to a court in Bengaluru.The court held that the petition was 'devoid of merits'. It also directed the trial court to expedite the trial, which has been pending for a decade. Justice B A Patil, rejected the plea filed...

The Karnataka High Court on Monday dismissed a petition filed seeking to transfer the alleged rape case, against Swamy Nityananda @Rajshekharan and others, from Ramanagra to a court in Bengaluru.The court held that the petition was 'devoid of merits'. It also directed the trial court to expedite the trial, which has been pending for a decade.

Justice B A Patil, rejected the plea filed by petitioner, K Lenin, who has alleged that accused had illicit relations within India and Abroad. On the basis of the complaint, police after investigation filed a chargesheet in the case.

Lenin, who is the complainant in the case, alleged that his evidence was recorded 'de novo' by the trial court on September 18, 2019, which is unsubstantial in the eyes of law. Further the court by recording the evidence has acted beyond its power to record fresh evidence, which was earlier recorded on August 8, 2018 and August 16, 2018. It was claimed that petitioner apprehends that he may not receive a fair trial at the hands of the district and sessions judge.

Senior Counsel, C V Nagesh appearing for co-accused, Dhanashekaran @Nithya Sadananda Nithya Dhyanapeeta, argued that evidence recorded on September 18, 2019, cannot be set at not. At the beginning, the evidence was recorded with the help of the translator and subsequently it came to the notice of the court that the translator who has been appointed is a witness in the said case and in that context an application came to be filed by the accused for cancellation of appointment of the translator. The trial court after considering the factual matrix, rejected the said application.

Being aggrieved by the said order, the accused approached the high court and the court after considering the case allowed the said petition. Thus an order to get a fair trial and to avoid casualty of justice, such an application came to be filed and in that light the earlier evidence recorded by the trial court was set aside. Moreover, transfer of a criminal case on mere apprehension on the part of the applicant is not necessary, but there must be a reasonable apprehension.

Relying on the judgement of Nahar Singh Yadav & Another Vs. Union of India & Others, the Court said "Order of transfer is not to be passed as a matter of routine or merely because an interested party has expressed some apprehension about the proper conduct of the trial. There must be some substantial material to support the said contention and the said apprehension must be a reasonable apprehension. Keeping in view the said principle and on perusal of the records, I am of the considered opinion that the evidence of the petitioner, recorded on 8.8.2018 and 16.8.2018 and the evidence recorded subsequently on 18.9.2019, afresh is not going to create any apprehension, for the reason that the translator was not appointed in accordance with law.

Relying, on the judgement of Apex Court in the case of Akil @ Javed Vs. State (NCT of Delhi) reported in (2013) 7 SCC 125, the court said "The trial Court must strictly adhere to the procedure prescribed in Section 231 of Cr.P.C, read along with Section 309 of Cr.P.C. in order to ensure speedy trial, of a case and rule out the possibility of any manoeuvring taking place by granting undue long adjournments for the mere asking. Keeping in view the above said proposition of law and on perusal of records, it indicates that either at the instance of the prosecution or sometimes at the instance of the accused, the case has been adjourned for a decade and no progress has been made."

It added, "Slow going of a case is considered to be an evil to the society. The laws are meant for securing justice in society and if the courts are not going to protect the rule of law and its enforcement, then there will be anarchy and violence. It is the duty of the Court to enforce the law. The rule of law has to prevail and the court has to see that nobody violates the law. The trial Court as well as the parties appearing in the case have not adhered to the said proposition of law so as to make progress and to ascertain the truth in the case."

The court pulled up the petitioner by saying "When the accused has specifically contended that his identity is not disputed and when the law provides in the absence of the accused to proceed with the case, then under such circumstances, the trial court ought not to have adjourned the case. Though many times the complainant has sought for adjournment on the grounds of health problems, the records indicate that even though he was present before the Court, he has not stepped into the witness box to give evidence. The said attitude of the complainant is deprecated. If he really wants to do justice, then under such circumstances, he must come forward and give the evidence as contemplated under the law."